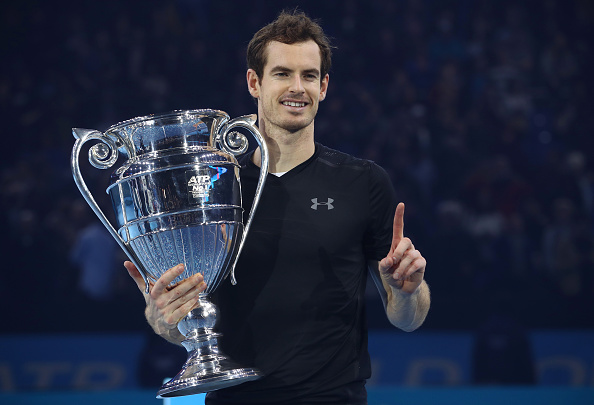 LONDON, ENGLAND – NOVEMBER 20: Andy Murray of Great Britain celebrates with the ATP Tour Trophy following his victory during the Singles Final against Novak Djokovic of Serbia at the O2 Arena on November 20, 2016 in London, England.

After a season in which he had already reached dizzy heights, Andy Murray saved the best for the last by outclassing Novak Djokovic 6-3 6-4 to claim his first ATP World Tour Finals title and secure the year-end top ranking on Sunday.

Against a player who has so often been his nemesis, Murray produced a relentless display to overpower the Serb he dislodged from the number one spot earlier this month.

Murray added the title to the Wimbledon crown and Rio Olympics gold he won during a stunning summer and, despite Djokovic’s Australian Open and French Open titles, there can be little argument the Scot is currently the world’s best player.

There was a slight wobble when Djokovic fought back from 4-1 down in the second set as the exertions of Murray’s near four hour semi-final epic against Milos Raonic began to tell.

But Murray was relentless and claimed victory on his third match point when an error-prone Djokovic fired a forehand wide.

“It’s very special playing against Novak in a match like this, we’ve played grand slam finals and at the Olympics before, but I am very happy to win and to be world number one is very special. It is something I never expected,” Murray said.

Three-times grand slam champion Murray is the 17th man to end the year at number one since ATP rankings began in 1973 and only the fourth since 2004 — after which Roger Federer, Rafael Nadal and Djokovic have shared the position between themselves.