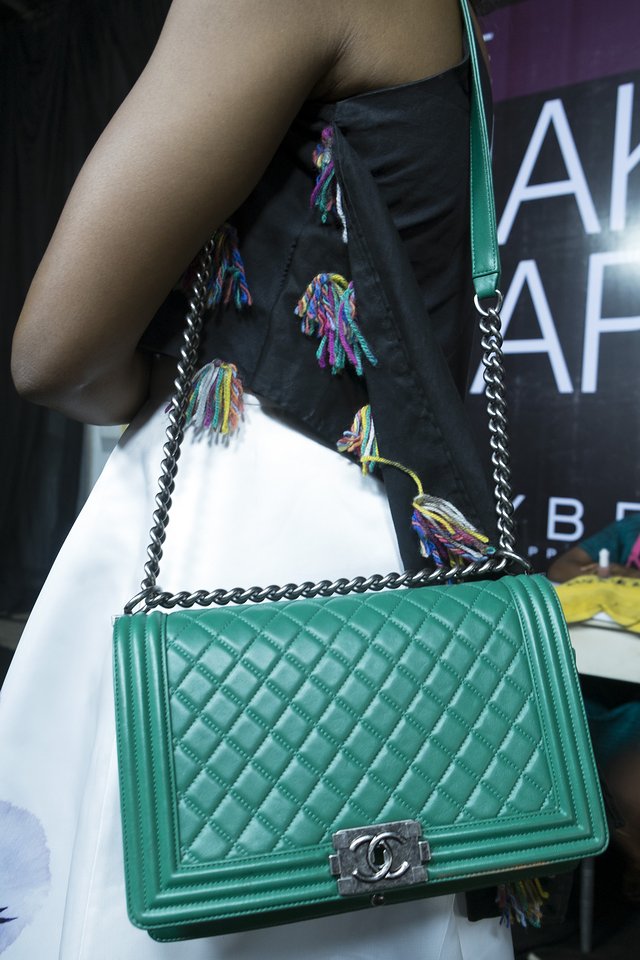 Senior fashion writer at Vogue, Marjon Carlos recently wrote an article on a Nigerian woman’s love for designer handbags, the it-bag obsession. Here’s a bit of what she wrote;

It was practically the first thing that I noticed as I stepped off the plane at Murtala Muhammed International Airport in Lagos, Nigeria, last week: an It bag.

As I slowly shuffled through an early-morning customs line, blurry-eyed and overwhelmed by the sweltering West African heat, I immediately perked up at the sight of a large quilted Chanel Boy bag in line ahead of me. I realized quickly that its elegant chain-link straps were strewn across the shoulders of the latest face of Saint Laurent and Dolce & Gabbana’s Fall 2016 campaigns, Nigerian model Mayowa Nicholas. Nicholas’s bag was subtle in its all-black colorway, but to the trained eye, it’s also a lavish indication of a woman who knows her designer accessories. A few hours later, as I sat alongside the runway at Lagos Fashion and Design Week, I quickly learned that it’s not just Naija fashion models who possess such intel. No, plenty of the chicest female denizens of the Nigerian cultural capital understand the sway of a serious It-bag game—and more than a few indulge in it.

Marjon later went to Alara to meet with the founder, Reni Folawiyo, who she said “chuckled at her naïveté.” Folawiyo said;

“It’s not that complicated,” she assured me. “Everywhere in the world, the bag you carry has always been a status thing.” But, she explained, in Nigeria, where the designer ready-to-wear market is still developing, it takes on a whole new meaning. “What connects you to what you think is fashionable and also speaks of your status more than your handbag?” said Folawiyo. “Your shoes, maybe, but your handbag more than anything else.” Ticking off Louis Vuitton and Hermès as favorites among Nigerian women (“Hermès is big here! Birkins! Plural!”), Folawiyo told me its not just the bag itself, but the way you carry it. Bending her arm at the elbow, the fashion doyenne motioned toward the inner crook of her arm, where a Nigerian woman’s purse handles would slide. “They carry it in a way that you must see it,” she said.

Later at Maki Oh‘s Spring 17 in-store presentation, the writer speaks to Folawiyo’s daughter Faridah on the topic, after she describes the it-bag as “armour.”

“There are some people who are ‘above’ leather,” Faridah laughs. “I say that ironically, of course! But the older and chic ladies like croc, snake, alligator, stingray.” Younger women start out at the ripe age of 18, she explained, borrowing their mothers’ purses before graduating to Chanel quilted bags of their own. It’s a way for women to stand out when they are wearing their trad, or traditional garments, like a buba or iro. “You have the same thing in the Middle East, where women wear abayas,” said Faridah. “The way they stand out is with their shoes and their bags.”

Read more of the article here.