The Fertile Chick: Don't Take Away My Carbs! 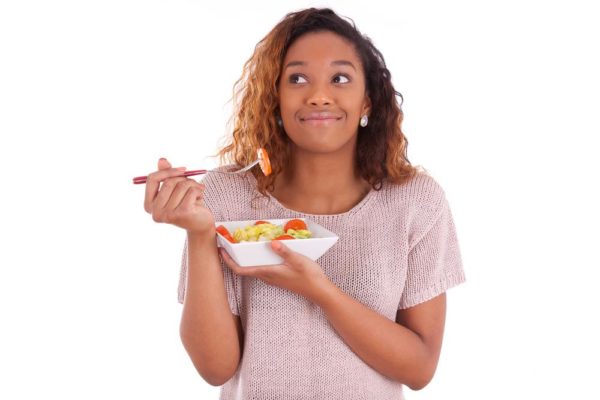 For me, that was one of the most devastating outcomes of my PCOS (Poly Cystic Ovarian Syndrome) diagnosis…having to give up a lot of the food I loved.

Gosh, it was hard. You see, I’m a foodie. I’ve always been one. Add to that the fact that I have one heck of a sweet tooth, and that I am also an emotional eater, then you can see why this was a particular hard pill for me to swallow, no pun intended. I’ve always been one of those people who e-n-j-o-y food. I derive the same amount of pleasure when eating sweet, hot bread and melted butter as I would from a fine dining meal. I love my food. It also hasn’t helped that, probably since I was a teenager, food has always been my number 1 therapist. To this day, when I’m feeling stressed or upset, eating has always been able to calm me, albeit only temporarily.

And did I mention that sweet tooth? OMG, you don’t even want to know! You know how normal people take off the frosting from cake before they eat it? Well, I’m not one of those people. For me, cake with no frosting is simply no fun. In fact, when I was younger, I would sit down with the cake board long after the cake was all gone, and ‘take care’ of every last piping of frosting. Yep, I was that bad!

What didn’t help matters is the fact that I used to be able to eat like a horse without putting on any weight at all. I would eat like a maniac, yet I was still as skinny as a rake. So thin was I that, at a point, I made it a point of duty to drink a bottle of malt drink every day, just so that I could look human. Ah, the good old days!

With no weight issues, I was totally oblivious of how my diet was wreaking havoc on my body. Fast forward to when I got married, started trying for a baby, encountered difficulty, and went seeking medical assistance…and I was told I had PCOS. PCO what? At first I was in denial, especially as I didn’t have absent periods, which I thought was the hallmark of the condition. But when I thought about how my weight had rapidly increased in a short space of time, and also the fact that even though the hair on my scalp was thinning, I had hair sprouting in a lot of other unwanted places, I had to accept the bitter truth.

So then, what to do?

My doctor didn’t prescribe any drugs to monitor my blood sugar, as he didn’t think I needed it. Instead, he insisted I overhaul my diet. I remember looking at him like he had grown a horn, when he told me to reduce my intake of white bread, rice, and carbs in general. Ah! So, what would I eat then?! It wasn’t until he explained what these were doing to my body that I had no choice but to get with the program. You see, women with PCOS often have higher levels of insulin in their blood, and many have trouble maintaining a healthy weight. This already elevated insulin level increases even more upon the consumption of carbs…and sugars in general. This leads to even more pronounced symptoms of the condition; more weight gain, prolonged cycles, hair loss, and the inability to ovulate, just to name a few.

As a TTC woman, there was no love for sugar that was going to stand in the way of me and being able to get pregnant, so I had no choice but to overhaul my diet. Even though I knew myself well enough to know that a total elimination would not be possible, I proceeded to limit my white bread, rice, yam, etc., to once a week, usually on Sundays. I also trashed my daily habit of drinking sweet drinks and soda, which was quite hard. Because I knew that it had to be sustainable, otherwise I would backslide quicker than one could say PCOS, I made sure I substituted my carb-y meals with foods I actually enjoyed; spicy beans, moi-moi, pepper soup, different types of salads…I soon got to the point where I would actually look forward to my meals every day. And don’t get me wrong, I didn’t eliminate carbs completely. I did have the occasional whole wheat sandwich, and included sweet potatoes, boiled plantain, and even plantain flour (for those ‘swallow’ days), in my meal plan. And, with this, I saw a marked difference. Even though I eventually moved on to IVF, my PCOS symptoms were greatly reduced. I lost weight and my hair regained a lot of its body.

I started eating anyhow again. There were no more limits for me. I would send for cupcakes, just because. White bread and butter became my TV-watching companion once again. Because I was no longer TTC, I didn’t think I had to be mindful of my PCOS. I could eat anything I wanted now, right?

Wrong! So, so wrong!

The weight piled back on in a flash. The moodiness and lethargy returned. But the one that actually got my attention was when I went to the salon the other day, and my stylist was lamenting, not only the limpness of my hair, but a small, coin-sized bald patch on my scalp. Eeehhn?! Bald what?! My vain self could not stomach that one oh! Haaa! No way oh!

While still in the salon, I was already on my phone, checking out a popular hair growth supplement, which has been endorsed by a number of local and international celebrities. There was a part of me that wanted to order it on the spot, but another part of me that remained wary of this kind of drug. I couldn’t help but wonder what I would be sacrificing to get the rapid hair growth it promised. Well, it didn’t take too long for me to find some not-too-pleasant reviews of this drug, with some people complaining of skin breakouts and even hair loss (such an oxy-moron, right?). Still under the dryer, my research led me back full circle to PCOS. Yep, PCOS again. I found out that, at heightened levels, PCOS leads to elevated levels of androgens or testosterone and dihydrotestosterone (DHT). High levels of these hormones in women with PCOS cause hair loss, especially DHT.

I knew there was no more running away from it. Yes, I was no longer trying for a baby, but I could no longer deny the fact that living a healthy lifestyle to control my PCOS is a lifetime commitment, and not just for a moment. Apart from hair loss, unmanaged PCOS can lead to type-2 diabetes, high blood pressure, and even heart problems. I know I want to be here for my girls for a long time to come, so giving up my bread is a small price to pay.

I can hear some PCOS ladies mumbling and complaining now. How can one overhaul one’s diet, especially in this festive season? My people, if I tell you that I won’t eat Christmas rice or cake, I am telling you lies! But here is how I intend to do it.

When it comes to festive rice, or pasta, or potato meals, instead of having that meal and the protein, have the protein and the meal. Confused? Okay, let me simplify it. If in your former life, you would have a plateful of rice and a piece of chicken, now you should have much more of the chicken (or other protein) and a small serving of rice (probably a fourth of what your previous portion would have been). If there are other add-ons like moi-moi, coleslaw or salad, you could use these to further supplement your reduced portion of the carbs. But please, the coleslaw or salad I talk about isn’t the type drenched in salad dressing, baked beans and ketchup. Some of these so-called salads can pass for soup, by the time we Naija people finish with them. No, not those.

As for desserts, I’ll be the first to raise my hand to say I still indulge in these once in a while. I’m not the person who will ignore the tray of birthday cake being passed around, just because of PCOS. I beg, I didn’t kill anybody. Let me enjoy my life small. But instead of going for the giant slice, with an even taller layer of frosting, I now opt for much smaller slices. If you can ditch the frosting, better, but if you are like me and are still trying, then moderation is key.

The bottom line is being able to find something that can form part of your permanent lifestyle…because this is for life. Stay well clear of these fad diets, because the weight that is waiting for you when you’re done with these diets, will make your starting weight seem like a learner! I was doing my nails once, when one of my Nail Tech’s clients walked in, holding a flask of what she called her breakfast. Unfortunately, the flask fell and its contents spilled to the floor. You would have thought you were in a bakery from the smell that emanated. Apparently, she had made coffee with lots of butter (yes, butter), honey, cinnamon, etc. Apparently this diet she’s on (the Keto diet) is about using fat to burn fat…meaning a very fat-rich diet but with zero carbs (not even fruits). My mouth was open as I listened to her. When I asked her about cholesterol, she was mumbling. May God never allow us encounter the ‘diets’ that will give us issues later in life.

In summary, your diet needs to be sustainable…and in addition, you have to be ready to plan for it! You must have a meal plan. You can’t wing it, hoping you’ll just find something healthy to eat sha. Hunger is the surest and fastest way for you to slide back into your old ways, without thinking twice about it. A few weeks ago, I went for a friend’s mother’s wake keeping straight from work…starving. In the gift bag each person was given, was a massive bowl of rice, a pack of small chops and a fizzy drink. By the time we were on Eko Bridge, I had wolfed everything down. I didn’t even leave one puff-puff for my kids. Alas, the guilt I felt wasn’t enough to undo the damage. I know if I had planned better and not gone there hungry, I would had more restraint.

I hope this helps not only my PCOS sisters, but those looking to eat healthier. It ain’t easy, but with determination and commitment, we can achieve it.

Lota Ofodile: Love Don’t Care… But If You Do, Then You Should