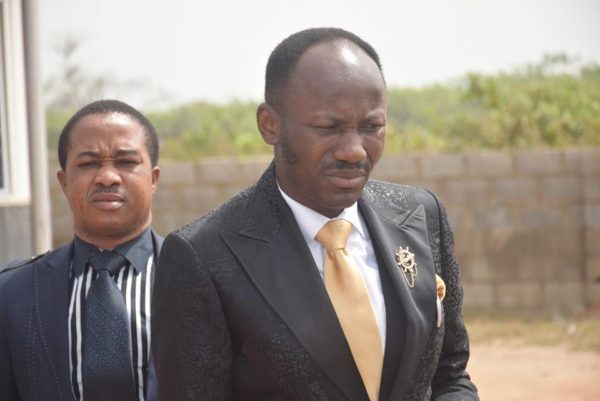 Apostle Suleman arrives Abuja for his meeting with DSS

The Senior Pastor of Omega Fire Ministries (OFM) Worldwide, Apostle Johnson Suleman, on Monday honoured the invitation of the Department of State Services (DSS) in relation to a statement he made during a church meeting on January 15th 2017.

Suleman had told his church members to “kill” any Fulani herdsman who tried to attack them.

Following an alleged attempt by the DSS to arrest him, Suleman said that he will not retract the statement or apologise for it, adding that it was directed at killer Fulani herdsmen and not the Fulani nation or Muslims.

The clergyman, prior to his appearance at the DSS office, challenged the Federal Government to compel the Kaduna State Governor, Nasir El-Rufai, to produce the Fulani herdsmen he gave money. 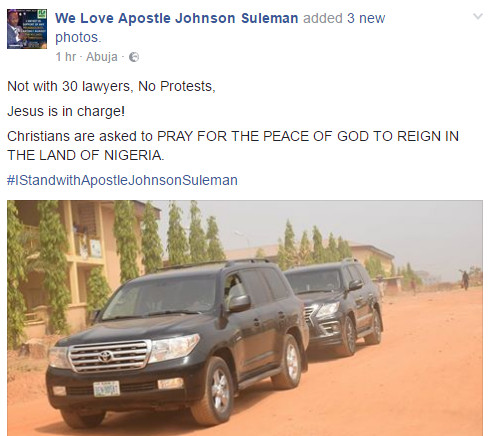 El-Rufai, had in December 2016, said that the state government paid some of the Fulani herdsmen compensation for the loss of lives and cattle after tracing them to Cameroon, Niger, Chad, Mali, and Senegal.

“We took certain steps. We got a group of people that were going round trying to trace some of these people in Cameroon, Niger republic and so on to tell them that there is a new governor who is Fulani like them and has no problem paying compensations for lives lost and he is begging them to stop killing.

In most of the communities, once that appeal was made to them, they said they have forgiven. There are one or two that asked for monetary compensation. They said they have forgiven the death of human beings, but want compensation for cattle. We said no problem, and we paid some. As recently as two weeks ago, the team went to Niger republic to attend one Fulani gathering that they hold every year with a message from me,” El-Rufai said.

Suleman made the demand in a statement issued by his Communications Adviser, Phrank Shaibu.

He said naming the beneficiaries of the money would disabuse the minds of Nigerians of the conflict that Christians were the targets of incessant attacks by Fulani herdsmen.

He added that failure of the Federal Government to compel El-Rufai to name those he paid money to will indicate the insincerity of the President Muhammadu Buhari administration.

“There’s no end to the killing of Christians in Kaduna. Those behind the heinous crime are known. Yet no one has been charged for murder.

Instead people like us who speak the truth are being persecuted. The federal government must not give the impression of partiality or suggest that Christians are the target of this administration.

The governor of Kaduna state confessed that he paid money to some Fulani herdsmen as compensation to stop the killings in southern Kaduna.

That means he knows those who have committed atrocities against Christians. He must be made to produce them to answer to charges of murder and other crimes.

The governor’s response to the killings in Southern Kaduna has been  consistent with this mindset. In a recent chat with newsmen in Kaduna, the governor made different remarks to substantiate his love the herdsmen and their activities.

First, he said when he became governor, he traced the attackers to Cameroon, Chad, and Niger and sent a message to them that one of their own, a Fulani like them, was now governor. This comment displays a dramatically bigoted mindset.

Which is worse? Saying the truth or offering money to murderers? Did El-Rufai offer money to ghosts? For you to pay someone money, the person must have a known and fixed address. As the chief security officer of the state, was it not his business to arrest and put these hoodlums on trial? How come no one has been caught or being prosecuted for the massacre in Southern Kaduna? Obviously, there is more to it than meets the eye,” Suleman said

Suleman called on security agencies not to allow politicians and “ethnic warlords” use them to achieve “parochial objectives”.

He said such developments could lead to grave consequences for the country.