#CSW61: Men Should be Prepared to Lose their Positions to Women - UN Sec-Gen. António Guterres 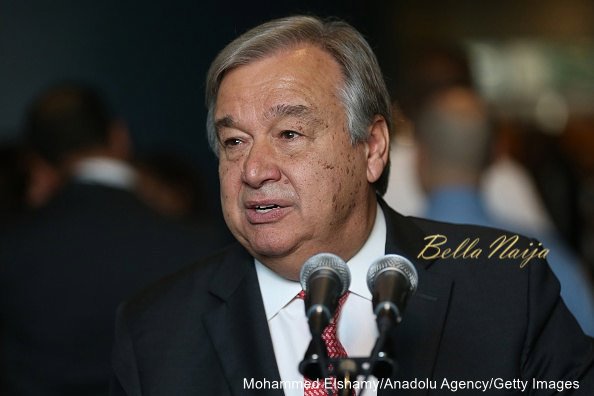 UN Secretary-General António Guterres has asked men to be prepared to lose more positions to women so as to ensure gender parity.

Guterres told women’s rights activists and civil society representatives at a town hall discussion at UN headquarters in New York that “the clear objective of our time is parity rooted in women’s empowerment”.

“Gender parity at all levels – political, cultural, economic and social – is a ‘central objective’ and must be based on women’s empowerment.

Parity is important in all areas of political and social life. This is a battle, a struggle.

Generally no one likes to lose positions they have long held, but the reality of gender parity is that many more women will be in positions that today are occupied by men. But that’s a good thing,” he said, noting that in his experience, gender parity means better decision-making and better management,” Guterres said.

The Secretary-General sought suggestions and opinions of the civil society representatives on how the UN could move forward on its commitments on gender equality.

He opened the discussion by sharing life lessons on the issue, telling the gathering that during his time as Prime Minister of Portugal, one of his most difficult battles was putting family values on the national agenda.

“There was kind of a national conspiracy to make sure that no one talked about it – from the police to the judiciary and public in general, it was as if the problem did not exist. But it was a very serious problem,” he said, noting that much had to be done in those areas, including through legislation and broad based campaigns to put it on the agenda.

According to him, the central question is empowerment at all levels.

Later, as UN High Commissioner for Refugees, Guterres said he saw that women and children were the most vulnerable among those that fell under his agency’s mandate.

“Indeed, women were ‘doubly vulnerable”, he said, adding over his tenure, he learned while international legal protections are important.

The question of empowerment has many dimensions, one being to ensure that men and women are able, in parity, to assume their responsibilities at all levels; political, economic, social and cultural.

And so, parity for us in the UN is a central objective, at the level of senior management, as well as the entire staff,” the UN scribe said.

“So this is a very central question,” Guterres said, inviting the enthusiastic audience to share their perspectives on ways to push the issue forward, in cooperation, not only as an objective regarding the rights of women but “an objective in relation to the quality of our societies and the international community as a whole”.

The meeting, attended by UN Women Executive Director Phumzile Mlambo-Ngcuka, Deputy Secretary-General Amina Mohammed and other senior UN staff, ended the first week of the 61st Commission on the Status of Women.

Known as the largest inter-governmental forum on women’s rights and gender equality, the theme this year is ‘Women’s Economic Empowerment in the Changing World of Work’.

NAFDAC Office Fire: There was no Loss of Life – Lagos Fire Director