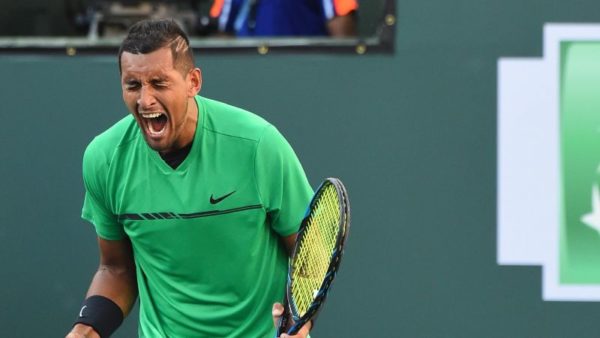 Kyrgios had beaten Djokovic in the quarter-finals in Acapulco almost two weeks ago in their first career meeting, and repeated the feat on Wednesday to reach the last eight, where he will face Federer.

Kyrgios sent down 14 aces, which included some second serves close to 120mph, won 85 per cent of points on his first serve and faced no break points.

World No 2, Djokovic said in his post-match press conference:

The run was amazing. I am very proud of it, obviously. It had to end at some stage. Unfortunately, it was today. Nick, again, as he did in Acapulco, served so well. I just wasn’t managing to get a lot of balls back on his serve, first and second, as well. That’s what made a difference.”

In the second big match of the day, Federer defeated Nadal 6-2, 6-3 in the 36th meeting between the pair to make it three in a row

Question marks were hanging over Federer’s glittering career when he missed the second half of last season due to injury problems, but the 35-year-old answered with a stunning comeback win in the Australian Open in January, where he beat Nadal in an epic final.

It’s a nice feeling to win the last three. I can tell you that,” Federer said in his post-match press conference.

But most importantly, I won Australia. That was big for me. On the comeback, I look back at that and think that was one of the coolest things I ever experienced in my career.

All the matches that we have played are unique in many ways for both of us, winning or losing. So I take it. For me, it was all about coming out and trying to play the way I did in Australia. I didn’t think it was going to be that possible, to be quite honest, because the court is more jumpy here so it’s hard to put the ball away. So getting in the lead was crucial, and then staying on the offence and pressing was the goal for me. It was a really good performance by me, I thought.”

Federer, who got the better of his Spanish rival in a thrilling five-setter at the Australian Open final in January, broke Nadal’s serve to open the match then survived a break point to hold with a backhand winner down the line for 2-0.

Nadal admitted he was off his game and knew Federer was the better player.

So I was not enough good tonight and he deserved the victory, for sure. Very easy.”

Nigerian Army To Organize “Marathon For Peace” In Borno