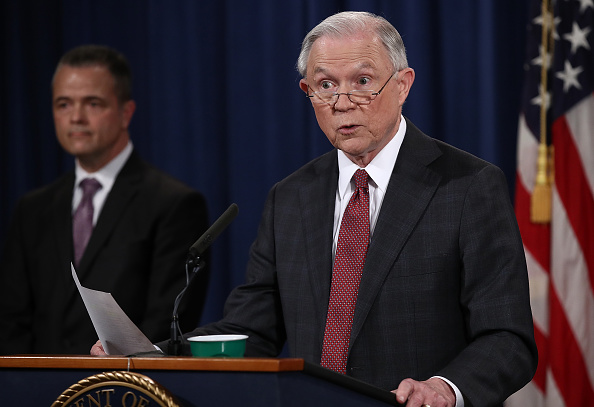 U.S. Attorney General Jeff Sessions (R) answers questions during a press conference at the Department of Justice on March 2, 2017 in Washington, DC. Sessions addressed the calls for him to recuse himself from Russia investigations after reports surfaced of meetings he had with the Russian ambassador during the U.S. presidential campaign. Also pictured is Sessions’ Chief of Staff Jody Hunt (L).

This is in reaction to a revelation made by The Washington Post that Trump’s pick for Attorney-General, Jeff Sessions had contacts with Russian officials prior to the November 8, 2016 election.

Democrat Senator Al Franken asked Sessions during his confirmation hearing on January 10: “If there is any evidence that anyone affiliated with the Trump campaign communicated with the Russian government, in the course of this campaign, what will you do?”

Sessions responded: “I’m not aware of any of those activities. I have been called a surrogate at a time or two in that campaign and I did not have communications with the Russians. And I’m unable to comment on it.”

An excerpt of The Washington Post’s report read:

One of the meetings was a private conversation between Sessions and Russian Ambassador Sergey Kislyak that took place in September in the senator’s office, at the height of what U.S. intelligence officials say was a Russian cyber campaign to upend the U.S. presidential race.

The previously undisclosed discussions could fuel new congressional calls for the appointment of a special counsel to investigate Russia’s alleged role in the 2016 presidential election. As attorney general, Sessions oversees the Justice Department and the FBI, which have been leading investigations into Russian meddling and any links to Trump’s associates. He has so far resisted calls to recuse himself.

When Sessions spoke with Kislyak in July and September, the senator was a senior member of the influential Armed Services Committee as well as one of Trump’s top foreign policy advisers. Sessions played a prominent role supporting Trump on the stump after formally joining the campaign in February 2016.

Trump tweeted a photo on Friday of Schumer’s meeting with Putin in New York in 2003 and the picture showed them drinking coffee and eating donuts.

The president, in calling for a probe into Schumer’s “ties to Russia and Putin” also called the New York Senator “A total hypocrite!” 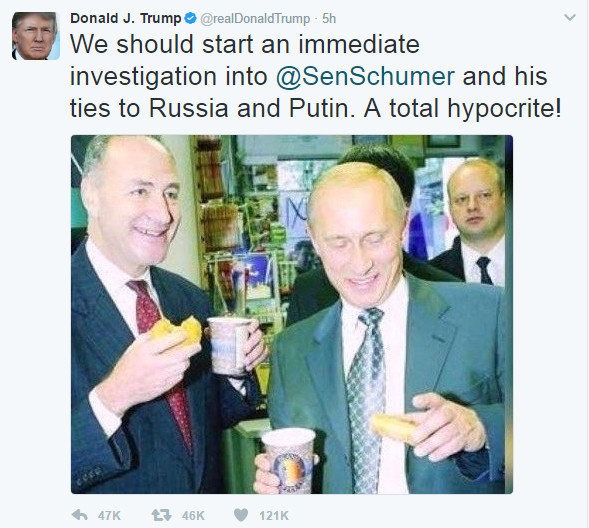 Schumer responded on Twitter later writing that he would “happily talk” under oath about his meeting with Putin, which took place “in full view of press and public”. 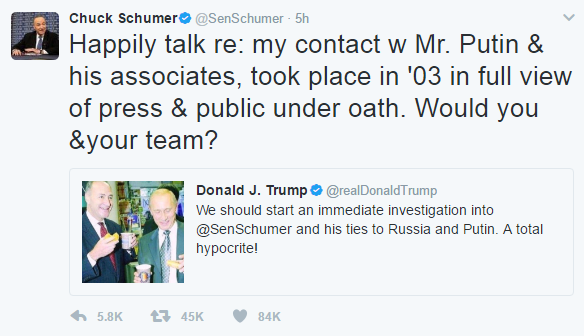 The president then posted a second tweet demanding “a second investigation, after Schumer, of Pelosi for her close ties to Russia, and “lying about it”. 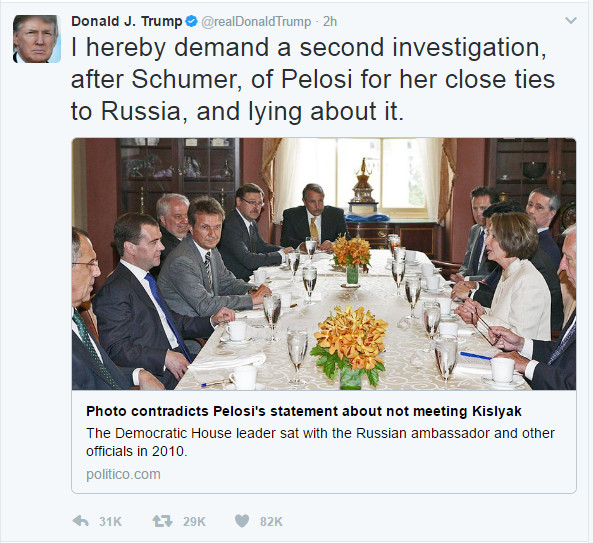 Pelosi said on Friday that she had never met the Russian ambassador to the U.S., Sergey Kislyak but the photo posted showed her sitting at a table with a number of Russian officials, including the envoy and then-president Dimitri Medvedev.

Pelosi later clarified that she never had a private meeting with the ambassador.

Trump had, in a statement on Thursday, said that the scandal plaguing his Attorney-General over contacts with Kislyak “is a witch-hunt” and blamed Democrats for blowing up the controversy for political reasons.

“Jeff Sessions is an honest man. He did not say anything wrong. He could have stated his response more accurately, but it was clearly not intentional.

This whole narrative is a way of saving face for Democrats losing an election that everyone thought they were supposed to win.

The Democrats are overplaying their hand. They lost the election and now, they have lost their grip on reality.

The real story is all of the illegal leaks of classified and other information. It is a total witch hunt!” Trump said in the statement.

Sessions had also recused himself from any investigation related to Trump’s 2016 presidential campaign.

The Attorney-General’s recusal came at a time when Russia was accused of interfering in the presidential race against Trump’s rival at the November 8, 2016 presidential election, Democratic Hillary Clinton.

Sessions, in a statement he issued and read at a live news conference, recalled his advice during the course of the confirmation proceedings on his nomination to be Attorney-General.

“I advised the Senate Judiciary Committee that ‘if a specific matter arose where I believed my impartiality might reasonably be questioned, I would consult with Department ethics officials regarding the most appropriate way to proceed’.

During the course of the last several weeks, I have met with the relevant senior career Department officials to discuss whether I should recuse myself from any matters arising from the campaigns for President of the United States.

Having concluded those meetings today, I have decided to recuse myself from any existing or future investigations of any matters related in any way to the campaigns for President of the United States.

I have taken no actions regarding any such matters, to the extent they exist.

This announcement should not be interpreted as confirmation of the existence of any investigation or suggestive of the scope of any such investigation.

Consistent with the succession order for the Department of Justice, Acting Deputy Attorney General and U.S. Attorney for the Eastern District of Virginia Dana Boente shall act.

As and perform the functions of the Attorney General with respect to any matters from which I have recused myself to the extent they exist,” Sessions had said.