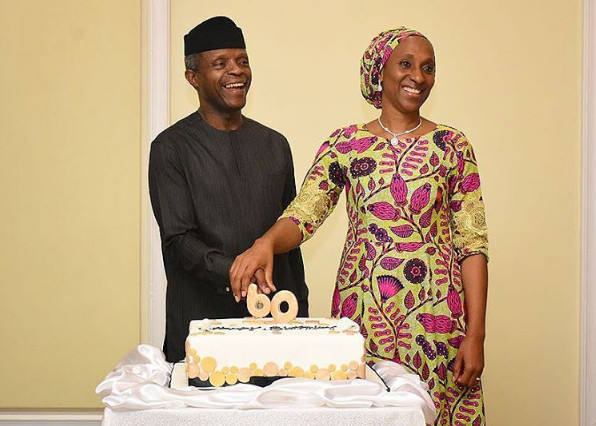 Congratulations and praises have been pouring in from all over the country.

In a statement by his Special Adviser (Media and Publicity), Yusuph Olaniyonu, President of the Senate, Bukola Saraki, congratulated Osinbajo, on the occasion.

“On behalf of all members of the 8th Senate of the Federal Republic, I wish our Acting President, Prof. Yemi Osinbajo, a happy birthday as he turns 60 today. We pray to Almighty God to continue to give you good health, great wisdom and enduring grace to serve the nation, in particular, and humanity, in general, for many more years,’’ he said.

Similarly, the Deputy President of the Senate, Ike Ekweremadu, extolled the Osinbajo on his leadership qualities and achievements.

He described him as an erudite scholar with humble dispositions, and commended his handling of the nation’s affairs as acting president.

“I congratulate Prof. Osibanjo on this landmark birthday and commend him for the leadership qualities exhibited as Nigeria’s Vice President and so far, as Acting President. As I have always emphasised, the challenges faced by Nigerian masses are virtually the same and, as leaders, we must leave up to their yearnings, inspiring and giving them a sense of direction and belonging.

We must acclaim our leaders when they are doing well as well as call them to order when they are derailing, irrespective of political affiliation. I, therefore, commend the acting president for his peace shuttles across the country and unrelenting efforts at resuscitating the troubled economy and rebuilding the badly fractured bridges that connect us as a people,” Ekweremadu said.

Ekweremadu wished the acting president a happy birthday and the grace to continue on the path of success.

Speaker of the House of Representatives Yakubu Dogara has also eulogised Osinbajo, for demonstrating exceptional capacity, humility and patriotism in handling the affairs of state.

Dogara commended the acting president for exhibiting abiding faith and commitment to the ideals of democracy and rule of law.

He noted that since his emergence as the Vice President and chairman of the country’s Economic Council, the acting president had not left any one in doubt in his capacity to handle matters of national interest, development and progress.

He commended Osinbajo’s disposition towards building national peace, unity and stability of Nigeria which he had always manifested while carrying out his duties.

Dogara wished his Excellency a happy birthday celebration, and prayed that God Almighty will continue to keep him in good health.

The All Progressives Congress (APC) also congratulated Osinbajo, saying he had demonstrated high level loyalty and commitment to the “change agenda’’ of President Buhari and their party.

According to the statement by the party’s National Publicity Secretary, Bolaji Abdullahi, no doubt, his wisdom, vigour and innovativeness have been essential to the numerous achievements recorded by this administration.

“At 60, Prof. Osinbajo has recorded several landmark achievements as a man of God and a man of the law,” it said.

The APC wished the acting president a happy birthday filled with God’s blessings and grace.

It also prayed that God would continue to bless him with good health, wisdom and many more years in the service of God and country.

Osinbajo singing “Aka Jehovah” with his wife Dolapo.

Born on March 8 1957 at Creek Hospital, Lagos, Osinbajo is a professor of law and a Senior Advocate of Nigeria (SAN). He is married to Oludolapo Osinbajo (nee Soyode), grand daughter of the late sage and statesman, Obafemi Awolowo.  They are blessed with three children.

Osinbajo attended had his Primary education at Corona School Lagos. Between 1969- 1975, he attended Igbobi College, Yaba where he was the winner of the State Merit Award (1971); the School Prize for English Oratory (1972); Adeoba Prize for English Oratory (1972-1975); Elias Prize for Best Performance in History (WASC, 1973); School Prize for Literature (HSC, 1975); and African Statesman Intercollegiate Best Speaker’s Prize (1974).

Thereafter, he studied for his undergraduate degree at the University of Lagos between 1975-1978 where he obtained a Second Class Upper Degree in Law. Here, he also won the Graham-Douglas Prize for Commercial Law. In 1979, he completed the mandatory one-year professional training at the Nigerian Law School whereon he was admitted to practice as a Barrister and Solicitor of Nigeria’s Supreme Court. In 1980, he attended the London School of Economics & Political Science, where he obtained a Master of Laws degree.

An accomplished scholar, teacher, lawyer and administrator, Osinbajo is one of the nation’s leading experts on the Law of Evidence, National and Regional Corporate Commercial Laws and Public Law.

From 1979 –1980, Osinbajo participated in the one-year youth service programme as a Legal Officer with Bendel Development and Planning Authority (BDPA), in the now defunct Bendel State, Nigeria. In 1981, the University of Lagos, Nigeria, engaged Osinbajo as a Lecturer. From 1988–1992, he was appointed as an Adviser (Legal Advice and Litigation), to the then Attorney-General of the Federation and Minister of Justice, Prince Bola Ajibola, KBE.

In 1994, he became a Professor of Law following which he was appointed Head of Department of Public Law, University of Lagos. Between 1999 and 2007, Osinbajo was Member of Cabinet of the Lagos State Government where he served as Attorney-General and Commissioner for Justice.

From 2007 – 2013 Osinbajo was once again employed as a Professor of Law, Department of Public Law, Faculty of Law, University of Lagos. In 2007, Osinbajo became Senior Partner at SimmonsCooper Partners, Nigeria ( a commercial law practice).

He was also a Staff Member, United Nations Operations in Somalia, Justice Division, UNOSOM II; and Member, United Nations Secretary General’s Committee of Experts on Conduct and Discipline of UN, Peacekeeping Personnel around the globe, Member, 2006. Osinbajo was a partner in Law Firm of Osinbajo, Kukoyi & Adokpaye.

Yemi is a member of the International Bar Association and the British Institute of International and Comparative Law and has served on the Nigerian Body of Benchers and the Council for Legal Education of Nigeria. He was also an independent director of CitiBank Nigeria and an ethics adviser to the board of the African Development Bank (AfDB).  He has authored, co-authored, and edited several books as well as publishing numerous articles in law journals.including

While in public office as Attorney General, Lagos, Yemi is credited with undertaking far-reaching significant judicial reform in Lagos State, addressing critical areas as judges’ recruitment, remuneration, training and discipline. In addition, he addressed access to justice for the poor by establishing appropriate institutions in the Office of the Public Defender (OPD) and the Citizens Mediation Centre (CMC).

Osinbajo was also the Pastor in charge of the Redeemed Christian Church of God (RCCG) Lagos Province 48, Olive Tree provincial headquarter parish, Ikoyi before his inauguration into office as the Vice President of Nigeria.

Supporting the Creative Industry! How Leading Chinese Automaker GAC Motors brought Excitement to the AMVCA 2017 with its Sponsorship of 2 Cars