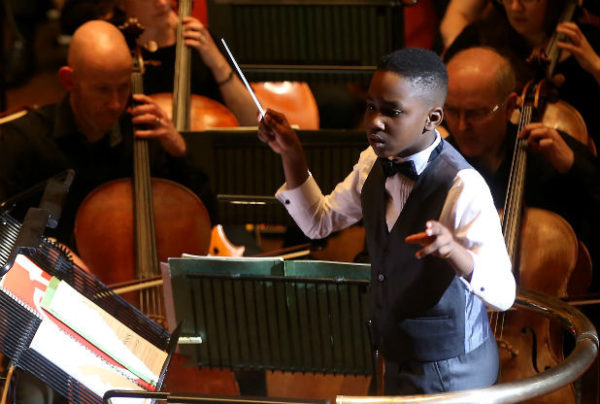 Matthew Smith, 11 became the youngest person to conduct an orchestra after he led 75 musicians from the Nottingham Symphony Orchestra (NSO) as part of Animal Magic, a show organised by NSO to raise money for Hope Nottingham, which helps disadvantaged people in the city.

They played Johann Strauss’ operetta Die Fledermaus to an audience of 1,300 persons.

“I have never conducted an orchestra before, so this will be my first time. I love all the instruments coming together to make one amazing sound. I am kind of famous – some people ask for my autograph when I am walking to school now!

I don’t know if conducting will be my future but I will carry on doing music. I know one day that I will conduct again. Staying in time and knowing when to go and when to stop – that’s what makes a good conductor,” Matthew told The Nottingham Post.

“I’m now asked for my autograph as I walk to school,” Matthew said.

His mother, Beverly Riley said: “I was quite nervous for him because he is 11-years-old and he is young. I just want him to enjoy the experience, I am very proud of him.”

“His mum came up to me when he was seven years old and said ‘my son wants to play violin’ so I found this battered old instrument and put it under his chin. Within two to three lessons, I thought ‘wow – what have we got here?’ You can recognise talent. We went from there and within six weeks, he was playing Ode To Joy in front of his whole school.

Two years ago, I said ‘look at this piece over Christmas – Strauss’ Die Fledermaus – then I will give you a conducting lesson afterwards’, but he had already conducted it all the way through from memory.

I told Nottingham Symphony Orchestra, ‘I have got a nine-year-old that is going to conduct you’ and they said ‘no you haven’t’ and it went from there,” Matthew said.

Williams said Matthew has “an inherent natural ability the like of which I have not seen for 30 years.”

The Sneinton C of E Primary School pupil beat the record of Jose Angel Salazar, 14, who conducted in his native Venezuela in 2012.

“I have been refused opportunities because I am not younger and slimmer” – Chigul talks Acceptance, Self-Confidence & More in New Interview