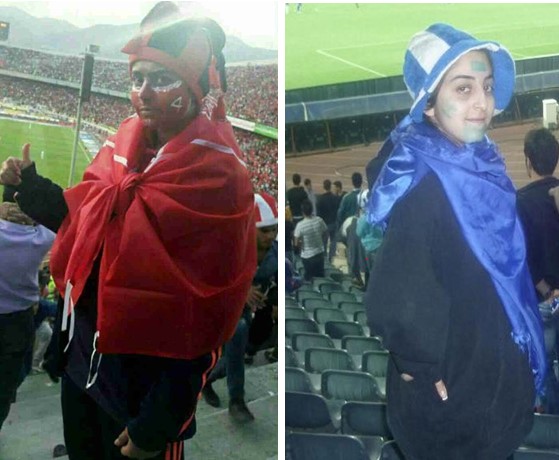 Two of the girls who were arrested. Photo Credit: Twitter.com/toohashie, February 14, 2017)

Iranian authorities have arrested eight young women who had disguised themselves as men in order to watch a football match between Esteghlal F.C. and Persepolis F.C. at Tehran’s Azadi Stadium.

They were arrested on February 12, 2017, and according to reports, the women face legal action.

According to Memri, Alireza Adeli, head of security for the Tehran municipality, stated that this was not the first time that women have disguised themselves as men in order to enter the stadium, and stressed that the ban was aimed at “preserving their honor, because the stadium’s atmosphere, commotion, and crowds are no place for them. Dear women who wish to watch the match can do so on TV, which broadcasts the games and gives everyone a way to watch them live.”

Islamic law in the country bans women from attending live matches when men are present. Additionally, Supreme Leader Ali Khamenei recently issued a fatwa banning women from riding bicycles in public, arguing that doing so attracts the male gaze and is therefore forbidden.

Awww! Serena Wiliams and her Fiancé Alexis Ohanian get Cute on the Beach