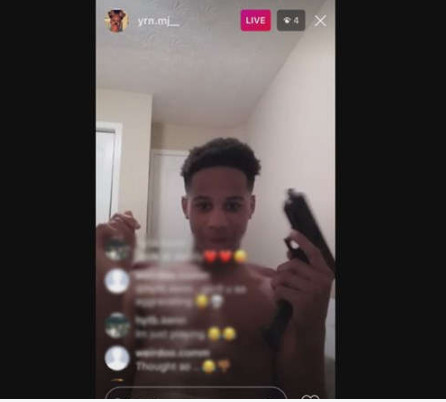 This is really heartbreaking!

Malachi Hemphill, 13 was on Instagram live when he accidentally shot and killed himself in Forest Park, Georgia.

After hearing a loud bang from his room on Monday evening, Malachi’s mother Shaniqua Stephens and sister ran upstairs, only to find him in the pool of his blood.

“We kicked in the door. We found him just laying there in a pool of blood. My daughter screamed and said, ‘Mom turn his phone off!’ As I proceeded to look at his phone he was on Instagram Live,” Shaniqua said.

Forest Park Police said they responded at about 10:40PM. Malachi was rushed to Grady Hospital where he died.

“This is just a pain that will never go away. He was my only son. He was just only 13. Just the thought of me seeing him on the floor will never leave my brain,” Shaniqua said.

She added that it was an accident and immediately after that, about 40 or 50 of his friends rushed to their house.

“There was about 40 to 50 kids outside. I guess these were the kids that were watching on live that live in the area. I guess when it happened they just ran over here,” she said.

Shaniqua said she was told Malachi got the weapon from a friend who got it from someone else.

The police said it is consulting with the Clayton County D.A.’s office, and charges may be filed, depending on where investigation leads.