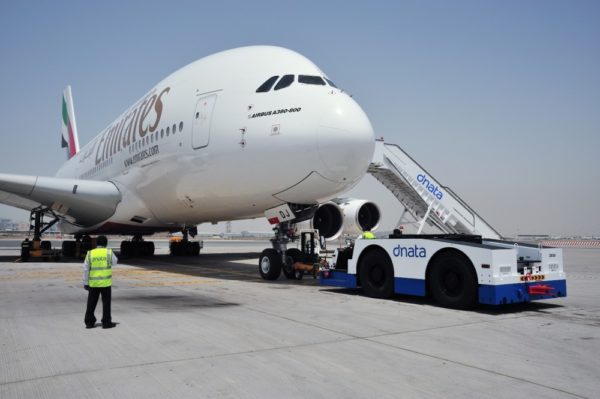 Emirates Group has announced that its 29th consecutive year of profit and steady business expansion, despite a turbulent year for aviation and travel. The company’s turnover hit $25.8 billion with a huge workforce of 105,000.

Released last Thursday in its 2016-17 Annual Report, the Emirates Group posted an AED 2.5 billion (US$ 670 million) profit for the financial year ending 31 March 2017, down 70% from last year’s record profit. The Group’s revenue reached AED 94.7 billion (US$ 25.8 billion), an increase of 2% over last year’s results, and the Group’s cash balance decreased by 19% to AED 19.1 billion (US$ 5.2 billion) mainly due to the repayment of two bonds on maturity and ongoing high investments into its fleet and aircraft related assets.

In line with the current business climate and to support the future investment plans of the Group, no dividend payment will be made to the Investment Corporation of Dubai (ICD) for 2016-17.

His Highness (H.H.) Sheikh Ahmed bin Saeed Al Maktoum, Chairman and Chief Executive, Emirates Airline and Group, said: “Emirates and dnata have continued to deliver profits and grow the business, despite 2016-17 having been one of our most challenging years to date.”

“Over the years, we have invested to build our business capabilities and brand reputation. We now reap the benefits as these strong foundations have helped us to weather the destabilising events which have impacted travel demand during the year – from the Brexit vote to Europe’s immigration challenges and terror attacks, from the new policies impacting air travel into the US, to currency devaluation and funds repatriation issues in parts of Africa, and the continued knock-on effect of a sluggish oil and gas industry on business confidence and travel demand,” he said.

In 2016-17, the Group collectively invested AED 13.7 billion (US$ 3.7 billion) in new aircraft and equipment, the acquisition of companies, modern facilities, the latest technologies, and staff initiatives.

Sheikh Ahmed said: “These investments will further strengthen our resilience, even as we extend our competitive edge, and adapt our businesses to the volatile business climate and fast changing consumer expectations.”

“We remain optimistic for the future of our industry, although we expect the year ahead to remain challenging with hyper competition squeezing airline yields, and volatility in many markets impacting travel flows and demand.”

“Emirates and dnata will stay attuned to the events and trends that impact our business, so that we can respond quickly to opportunities and challenges. We will also progress on our digital transformation journey. We are redesigning every aspect of how we do business, powered by an entirely new suite of technologies. Our aim is to deliver more personalised customer experiences, and seamless customer journeys, and make our operations and back-office functions even more efficient.”

Across its more than 80 subsidiaries and companies, the Group increased its total workforce by 11% to over 105,000-strong, representing over 160 different nationalities.

Emirates’ total passenger and cargo capacity crossed the 60 billion mark, to 60.5 billion ATKMs at the end of 2016-17, cementing its position as the world’s largest international carrier. The airline increased capacity during the year by 4.1 billion Available Tonne Kilometres (ATKMs), or 7% over 2015-16.

Emirates received 35 new aircraft, its highest number during a financial year, comprising of 19 A380s and 16 Boeing 777-300ERs. At the same time 27 older aircraft were phased out, bringing its total fleet count to 259 at the end of March. This fleet roll-over involving 62 aircraft was the largest programme it has ever managed in a year, and it brought Emirates’ average fleet age down significantly to 63 months, compared with 74 months last year, and the industry average of 140 months.

Against significant currency devaluations against the US dollar and fare adjustments due to a highly competitive business environment, Emirates managed to keep its revenue stable at AED 85.1 billion (US$ 23.2 billion). The relentless rise of the US dollar against currencies in most of Emirates’ key markets had an AED 2.1 billion (US$ 572 million) impact on airline revenue, and to the airline’s bottom line. It was the 2nd largest measured in a financial year after last year.

Total operating costs increased by 8% over the 2015-16 financial year. The average price of jet fuel fell slightly during the financial year. But due to an 8% higher uplift  in line with capacity increase, the airline’s fuel bill increased by 6% over last year to AED 21.0 billion (US$ 5.7 billion). Fuel is now 25% of operating costs, compared to 26% in 2015-16, but it remained the biggest cost component for the airline..

Overall passenger traffic growth continues to demonstrate the consumer desire to fly on Emirates’ state-of-the-art aircraft, and via efficient routings through its Dubai hub.

Emirates carried a record 56.1 million passengers (up 8%), and achieved a Passenger Seat Factor of 75.1%. The decline in passenger seat factor compared to last year’s 76.5%, is relative to the strong 10% increase in seat capacity by Available Seat Kilometres (ASKMs), and also in part due to lingering economic uncertainty and strong competition in many markets.

Under pressure from the weakening of all major currencies against the USD, passenger yield dropped to 24.7 fils (6.7 US cents) per Revenue Passenger Kilometre (RPKM).

To fund its fleet growth in a year of record aircraft deliveries, Emirates raised AED 29.1 billion (US$ 7.9 billion), using a variety of financing structures.

Emirates continued to tap the Japanese market for the Japanese Operating Lease (JOL) structure and Japanese Operating Lease with a Call Option (JOLCO) on both A380-800 and Boeing 777-300ER aircraft, while further accessing a diverse institutional investor and bank market base including Korea, the United Kingdom, Germany and Spain. Further and owing to the suspended Export Credit Agency (ECA) support, Emirates successfully structured an innovative AED 4.4 billion (US$ 1.2 billion) commercial bridge facility with US and Chinese institutions.

These deals align with Emirates’ strategy to seek diverse financing sources, and underscore its sound financials and the strong investor confidence in the airline’s business model.

Emirates closed the financial year with a healthy AED 15.7 billion (US$ 4.3 billion) of cash assets.

Emirates continued to invest in refreshing its product and services in line with changing customer needs. The airline revealed its enhanced A380 Onboard Lounge which will enter service in July 2017, and announced a significant, multi-million dollar deal with Thales to equip its future Boeing 777X fleet with Thales’ AVANT inflight entertainment system.

In an airfreight market that remained challenging with fast-changing demand patterns, Emirates’ cargo division reported a revenue of AED 10.6 billion (US$ 2.9 billion), a decline of 5% over last year, while tonnage carried slightly increased by 3% to reach 2.6 million tonnes.

Emirates’ hotels recorded revenue of AED 738 million (US$ 201 million), an increase of 5% over last year in a highly competitive market mainly in the UAE.

In its 58 years of operation, 2016-17 has been dnata’s most profitable yet, crossing AED 1.2 billion (US$ 330 million) profit for the first time. Building on its strong results in the previous year, dnata’s revenue grew to AED 12.2 billion (US$ 3.3 billion), up 15%. dnata’s international business now accounts for 66% of its revenue.