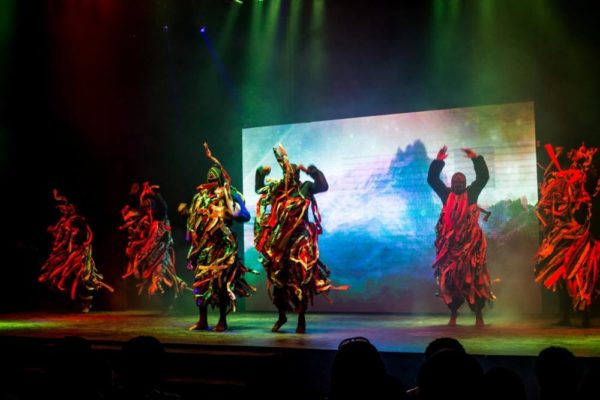 The venue was the new Terra Kulture Arena in Victoria Island and it was Wakaa the Musical, which had come from London, where it was last staged. The show is the first Nigerian musical to transition to London’s West End. The highly acclaimed musical by Bolanle Austen-Peters, was also one of the many activities penned down to mark the Lagos at 50 celebrations.

Wakaa the Musical is a play about the trials, successes and experiences of four young people who try to find their feet after graduation. Tosan, Kike, Ngozi and Rex who have big plans for their lives must now dance to the music that the real world life and their choices lay before them.

The show, which goes on for over two hours, doesn’t just take delight in the lives of the young graduates, but takes you on an emotional roller coaster with sprinklings of political satire.

Being a lover of musicals, Wakaa is a delight and very entertaining in every sense of the word.

One of the best things about the show is the blend of Nigerian popular music adapted into the musical, which makes it more relatable and appealing to the enthusiastic audience.

Asides the fact that Wakaa the Musical already boasts of a great original composition, the other songs in it – from Asa to Fela to Mr.Eazi – sends goose bumps to the audience. The cast members delivered beautifully, with their sonorous voices; even the orchestra was way too good to be left in the darkness.

Apart from the interstellar music arrangement, the use of costume is worthy of mention ranging from bright shiny colours to outfits that promote Nigeria’s culture and tradition as seen during Ngozi’s wedding.

It’s also interesting to note that the use of props. Although not at its very best,  was satisfactory enough to deliver a message and still keep up with the mood… from one scene to the other.

The show boasts of amazing theatre super stars – most of them from the first time the show hit the theater. There’s the amazing Patrick Diabuah, whose role as Tosan looked very good on him. Then there was Nengi Adoki who had too much sauce playing Kikelomo Johnson. Do we talk about Jolomi Amuka who was the spice of the show every time he made an appearance? Or even Bimbo Manuel and Ozzy Agu who were awesome playing Chief and Professor Jojoba respectively.

Looking carefully at the cast, you’ll also see Lilian Yeri, an erudite choreographer who has worked with the Maltina Dance All crew for years, as well as Paolo Sisiano who had us waiting for more scenes from him. The well-selected cast members delivered convincing performances whenever they were on stage.

The choreography was also to die for, with the actors and dancers giving moves for days and making the audience light up whenever they came out. Their energy was admirable; and I, like many other viewers joined some of the popular dances in my seat.

I must not forget to mention the amazing use of lighting, which was perfect enough to describe to the audience what exactly was going on and what needed to be seen.

I must also add here, that I felt the story could be a lot better and better suited for character development; but asides that, it’s a delightful show and no doubt, entertaining.