@Nedoux: I WON an invitation to the Lagos Premiere of #IsokenTheMovie on BellaNaija! Get the Scoop on my Amazing Experience

I was doing the online rounds just before going to bed on a Friday night when I stumbled on a post on BellaNaija inviting BellaNaijarians to participate in a contest for a chance to win tickets to attend the Isoken Grand Premiere in Lagos.

In my former introverted life, I wouldn’t have even considered doing this. I would have simply browsed the page disinterestedly and quickly moved on to the next post.

Well, I’ve learned that life is for the living and you never really know what might happen if only you tried.  And so I did.  I submitted my entry and was beyond excited when I was selected.

I am a big fan of Jadesola Osiberu; she adds a wonderfully fresh flavour to the Nigerian movie production space.

I had seen the ISOKEN teaser a few months ago; the vibrant imagery seemed to jump right off the screen and onto one’s lap!

I was literally counting down till June 16, when the movie was scheduled to launch at the cinemas. So, to actually attend the Grand Premiere was like the juicy cherry on top of an already delicious cake.

The dress code/theme was African royalty, and so, I thought Aso-oke seemed very fitting.  I sewed my pretty dress by myself a few months ago, from a blend of organza and silk Aso-oke re-purposed from my mother’s Gele (Check out my blog for more ideas on repurposing garments).

I attended with my friend Ijeoma, and arrived at the Landmark Event Center at about 6 pm.  It was my first time attending a movie premiere; it was such a glamorous affair.  It was lovely to see the celebrities up close, everyone looked so elegant. 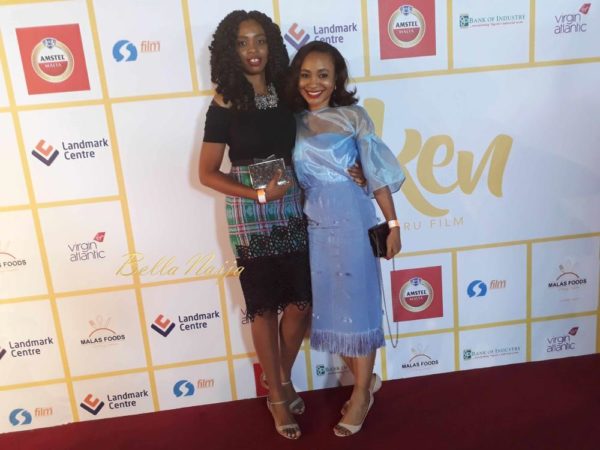 With my friend Ijeoma

The highlight of my evening was meeting the talented filmmaker – Jade Osiberu; she was so down-to-earth and friendly.  It was also nice to see some of the great actors from her previous works on Ndani TV- Titilope Sonuga, Abimbola Craig, and Deyemi Okanlawon.

With the lady behind the movie – Jade Osiberu

With our fave SGIT Abimbola Craig

ISOKEN The Movie was amazing, with a brilliant cast (Dakore Akande was perfect as Isoken) and a storyline that is so relatable.  I was particularly impressed with the intelligent and witty script.  Most importantly, there was a poignant lesson to take home.

It was obvious that a lot of thought went into the project, from the scenery right down to the soundtrack.  I can only imagine the amount of effort that went into nurturing the idea and growing it into a successful, well-executed film.  Nigerian Creatives have got so much potential.

ISOKEN is a must-see! It’s the poster child for the inspiring breakthroughs in Nollywood.  So, go watch it with your friends and family. I’m definitely going to see it again.

The premiere was a memorable experience; I had such a great time.

Thank you so much BellaNaija!

One of our winners @nedoux_sews from the #IsokenTheMovie Lagos Grand premiere giveaway sharing her fun experience! We’re so glad she had fun ??#bellanaija