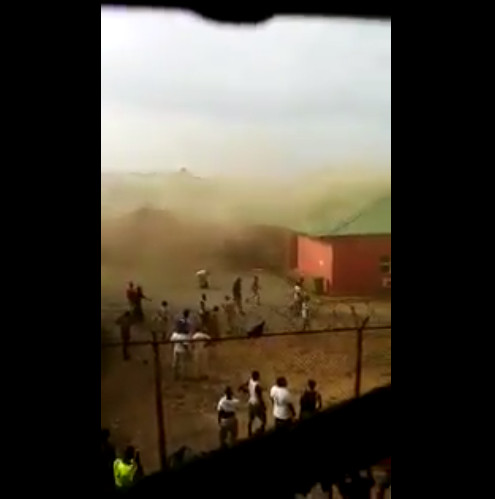 The Nigerian Prisons Service (NPS) has confirmed that there was a fire incident at Kuje Medium Security Prison, Abuja on Friday.

Sahara Reporters had reported that several buildings in the prsion were in flames, an incident which is said a group Prisoners Against Injustice in Nigeria (PAIN) claimed responsibility for.

The report stated that the group, whose statement was posted on the prison’s notice board, was removed by officials.

The group said it started the fire to draw attention to the plight of prisoners, adding that the death of one Samuel Mba, an awaiting trial inmate four the past four years was the final straw that broke the horse’s back.

The group lamented the congestion of the prisons, adding that inmates are forced to seek funds themselves fro medical care despite the budgetary allocation to that effect.

“Corrupt politicians who have looted the treasury only spend a few days in prison and are given special treatment while the poor man who stole a mobile phone is awaiting trial for years without bail.

While corrupt judges have never stepped their foot into the cells as inmates, their trials are speedy and they have not been made to face the same fate they have subjected so many others too.

The affected buildings are the moribund Clinic block, Custody 2, which is the congested home to 153 Awaiting Trial Inmates, Convicts block (custody 3) where 322 inmates are crammed into, and Custody 4, another Awaiting Trial block where additional 306 inmates are packed in like sardines,” the group was quoted as saying.

The group claims that 781 inmates have been displaced, adding that it is hoping this draws the attention of relevant authorities.

However, the NPS in a statement by its FCT Command Public Relations Officer Humphrey‎ Chukwuedo said that it curtailed the “minor fire incident”.

Chukwuedo said that the fire was, however, immediately put out by security personnel at the scene.

“‎No one was hurt as neither the medical staff nor inmates were around the building as at the time of the incident,” he said.

Chukwuedo said that‎ the cause of the fire is not immediately known but that the smoke may have emanated from a faulty electrical equipment in an adjoining building.

He said that the equipment were used for teaching inmates handworks.

The spokesperson added that detailed investigation had commenced into the cause of the incidence.

He said that normalcy has been restored and that the prison yard is calm and peaceful.

VIDEO: Kuje Prison in Abuja Is On Fire pic.twitter.com/fSC9YWLzBu

Maybrands Store is giving out 40% Discount Off your next Shopping Experience on all Items! Visit to Enjoy while Offer lasts