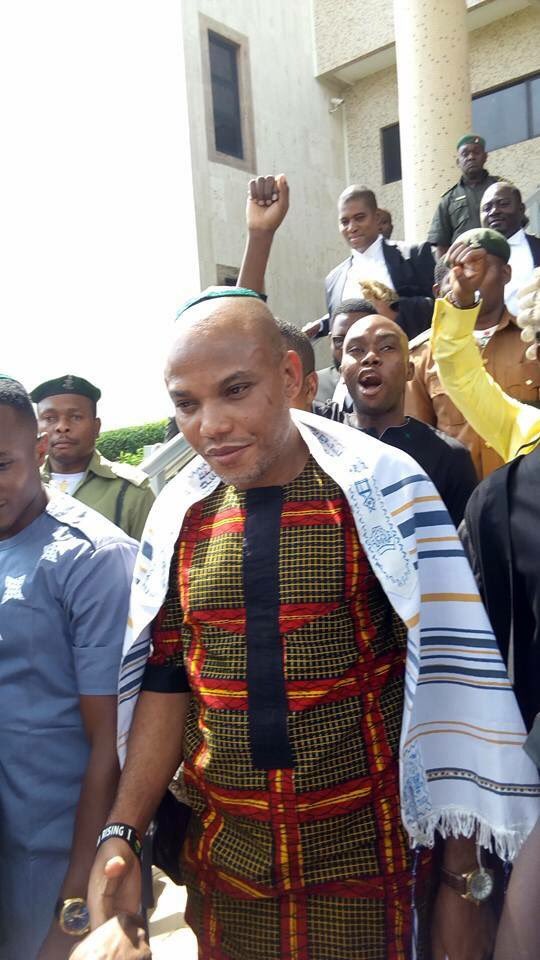 The traditional ruler of Nri community Eze Obidiegwu Onyesoh chased Indigenous People of Biafra (IPOB) leader Nnamdi Kanu and his supporters, away from his palace for committing a taboo in Nri culture, a statement credited to his Personal Assistant Ifeanyi Onyesoh, claims.

Ifeanyi said that the community will drag him to the customary court to “ensure that nobody else gives such insult to… its heritage”.

He made this known while speaking to journalists in Awka on Thursday, adding that the people are angry over Kanu’s alleged misconduct.

Onyesoh said Kanu with his wife, Uchechi, and supporters visited the palace of Eze Nri on July 19 and a shrine against the tradition of the people.

He noted Nri ancient Kingdom is the cradle of Igbo civilisation, whose culture is revered in the five southeast states of Abia, Ebonyi, Enugu, Imo, Anambra as well as Igbo communities in Delta and Rivers.

Onyesoh said on July 18, a day before Kanu’s visit, 12 young people came to the palace of Eze Nri requesting for an appointment with the traditional ruler for Kanu.

“I was the person that received them and so I told them to go and come back with a written letter so that they will get official reply from the palace since the delegation looked unusual, in that there was no titled person  among them.

At this point they all left and what we saw the next day was Kanu visiting Nri community with a huge crowd of his supporters.

He (Kanu) went straight to the house of one Shadrack Mbanefo, a subject to the traditional ruler of Nri.

The feelers we later got, was that the said Mbanefo claimed he handed over the ‘Offo Nri’ (symbol of royalty) to Kanu, and even allowed Kanu to visit the historic ‘Ohianwehi forest’ revered as ‘Forest of Life’ by Igbo tradition.

This forest is believed to be the place the first burnt offering was offered by the Jewish Igbo ancestors when they migrated from Israel more than 2,000 years ago,” he said.

Onyesoh said Nri people considered Kanu’s conduct as a taboo because no high profile visitor entered the community without first visiting the traditional ruler let alone a sacred place without the knowledge of the ruler.

He expressed regret that Kanu and his supporters after visiting Mbanefo returned to the entrance gate of the palace and tried to force it open.

“It was this unruly conduct that made the traditional ruler to telephone the security agents who responded promptly and dispersed Kanu and his supporters,” he said, adding that the people regarded Kanu’s action as an affront on their values and so resolved not to sweep the matter under the carpet.

“It is a taboo in Nri and equally against the Anambra State Traditional Rulers’ Council Law for a high profile visitor to visit a community without first paying homage to the traditional ruler. The people of Nri and her traditional ruler are not against Nnamdi Kanu and his agitation/aspiration but what we cannot take is for Kanu to come and mess up the Nri culture and tradition under whatever motive. The community will drag him to customary court to  ensure that nobody else gives such insult to the community and its heritage,” he said.

Reminded that Kanu visited Nri to receive “Offo Nri” title like the late Chukwuemeka Odumegwu Ojukwu and Movement for the Actualisation of the Sovereign State of Biafria (MASSOB) leader Ralph Uwazuruike both Biafra agitators, Onyesoh said; “if Kanu wants a title, Eze Nri is not aware of such aspiration.”

“If Kanu indeed met with anybody and claimed he was given ‘Offo Nri’, it means he is seeking the title through the back door and for the title he claimed was given to him by ‘Adama’ (Mbanefo ), a servant to Eze Nri, is a nullity.

My advice to Kanu is for him to first step up actions to amend his ways to synchronise with the values and culture of Igbo people which he is stampeding in the name of agitation.

Nri is the ancestral home of all Igbo people and for him to visit Nri in the manner he did means he has no knowledge of Igbo tradition and culture.

So, he must first study Igbo tradition and culture and properly be advised before he misleads himself,” Ifeanyi said.