Cisi Eze: Letter to a Gay Relative About to Get Married 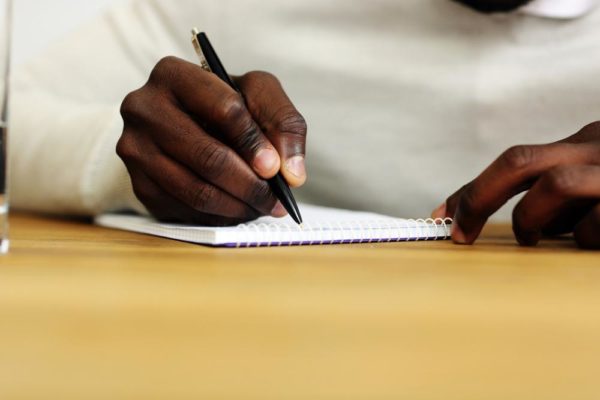 Living your truth is hard, I know; however, can you not throw lies at our faces? You are mutating into a tacky joke.

Maybe what you need to do it comb out your feelings, untangle each end, work around them, and accept them the way they are. But you won’t. Instead, you spray sheen of lies and walk around as if lies do not have a stench. You know, it takes courage for one to be honest. You lack that courage. You are not strong enough to be sincere.

You wrap yourself with layers of lies thinking they would rescue you from the truth bursting within your soul. Truth is a savage locked in a basement in chains. The day it breaks free, you will be sorry. The savage would ravage with rage and there would be nothing to salvage.

Before all this started, I walked in on you watching two men at it. I was dazed. “Not Uncle,” I thought to myself.

My shock must have been contagious because you stared at me – lips trembling and eyes wide opened.

“I am watching to know what they like about it,” you rushed your words.

You were too mortified to be angry at my indignant tone. Until that moment, I have never seen you contrite. You told me it was never going to happen again. To be sure, as though you desperately needed to assure yourself, you deleted those videos as I stared at you from the place shock held me to the floor.

I remember the first night you stole into my room. You thought I did not know. You stared at my sleeping form. I felt a burning sensation everywhere your gaze touched. And when your callused palm travelled up my hairy, teenage legs to my thighs, I tried so hard not to jump out of my skin.

The rest of that night, I cried.

My tears were hot; I felt my face burn. The burning sensation was pain I welcomed. Maybe the physical pain would dim the emotional hurt. Were I to take an emotional selfie, I would have looked like road kill dragged in by the cat.

My sanity returned the day you left. For those three weeks you stayed over at my parents’, you explored your “dark side” with me. I did not want it from you. No one would believe Uncle – Uncle who hates and gets violent on gay people, Uncle who is ultra-masculine, and says “no homo” at the end of certain sentences – did not ask God to create him to feel intense affection for women.

No one would believe a sixteen-year-old boy talking about being raped by another man.

Ridiculous things are hard to believe. You played on this and did ridiculously wild things with me. Whenever you were sated, you would crawl on your knees to beg and cry for forgiveness. Were I God, I would have spat on you and smote you. You made it seem as though mere supplications could straighten out a bent rod. Uncle, even if you got down on your knees to pray one million times, you will never pray the gay away. Bath a billion times in the River of Redemption, scrub your skin with sacred stones if you must, you would never wash me off your skin, and you would never purge me from within.

Six years later, you are here with your fiancée. She is pretty! Pretty, but stupid. Can’t she see the way you stare at me? Maybe she has seen and she does not want to accept you are not in love with her. She might be one of those women that have chosen to aspire to matrimony and all that comes with it. Desperation has blinded her.

Then, I talked with her on Saturday. We tiptoed in and out of the conversation of gay people. She loathes you! Imagine how she would feel when she knows her husband-intended is “as bent as a crayfish”. (That was how you put it.) She would scream to the heavens. I should have hinted at you not walking on the straight path. Being married to a gay man might open her mind to understand that this is a pattern of love, not just sex.

What even attracted her to you? Love did not bring you two together, hate did. You lied to her, strung her along, and next month, you two would walk down the aisle. Now that I think of it, you two deserve each other.

You’ll try to hide your predilections by being aggressive to people that are sincere with themselves. Hating them, judging them will not redeem you. You try so hard to conform, to be perfect, but soon, the quest for acceptance and conformity would drive you over the edge of sanity.  When that happens, I will drink to it.

P.S. Should we force people, who are not naturally interested in the opposite sex, into conventional marriages? That is tantamount to putting a square peg in a round hole. How do two people in love inspire so much hate in us? Is there any logic behind this anger (it is not hate) towards gay people?

P.P.S. You can be heterosexual and support LGBT rights. You only need to be human to support human rights. Adults support child’s rights. It does not make them children, right? When a person is homophobic, I begin to question things. “What are you hiding?” Some gay people have internalised homophobia. They overcompensate by being homophobic just like Uncle in this post. After spewing homophobia on social media, they slither their way into DMs and inboxes to talk about “sturvs”*. Like, really?