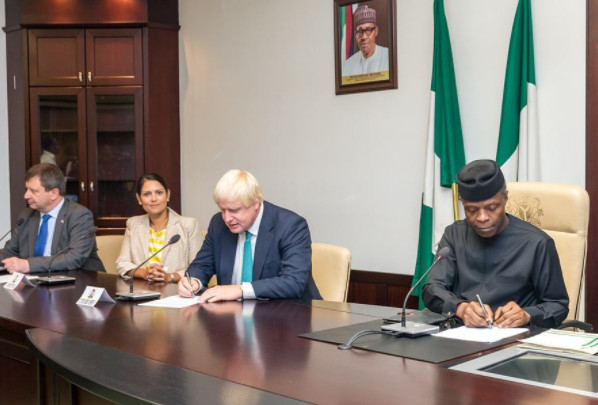 UK Foreign Secretary, Boris Johnson and International Development Secretary Priti Patel, have announced the donation of 200 million pounds to indigenes of the North-East region of Nigeria.

UK Foreign Secretary Boris Johnson, made the announcement in a statement when the secretaries visited Borno on Wednesday to see how UK can lead international response on the humanitarian crisis in the North-East.

Johnson said that the visit was aimed at assisting indigenes of the North East to avert famine and build stability and security after the destruction caused by Boko Haram in the region.

He said that the UK’s response in the region would include both security and humanitarian efforts on the secretaries’ first joint visit to Nigeria.

He said that both secretaries saw first-hand how British military had been providing training to Nigerian soldiers fighting Boko Haram on the frontline.

“The British military has to date, trained 28,000 Nigerian troops, equipping them with skills to turn the tide against Boko Haram, while our humanitarian aid is alleviating widespread suffering.’’

The 200 million pounds support is an allocation of Department for International Development (DFID)’s budget for four years from 2018 to  2022.

The International Development Secretary Priti Patel had announced that the programme was built on the UK’s existing 100 million pounds of humanitarian support for 2017.

“Boko Haram has generated suffering, instability and poverty on a huge scale with profound knock on effects far from Nigeria’s borders. I am proud of Britain’s commitment to supporting the Nigerian people in tackling terror.

In Maiduguri, I met casualties of Boko Haram violence, including bomb and gunshot victims and saw for myself the displacement of people that brutality and poverty have created.

Our military, diplomatic and development assistance is making a big difference. This is about helping a Commonwealth partner in its time of need as well as addressing the root causes of international challenges such as migration,’’ Patel said.

Patel also stressed the fact that the donation and the dedication of the UK government would serve as a lifeline to over 1.5 million people in the region.

According to the statement, UK’s increased support is expected to extend the DFID humanitarian programme in Nigeria over five years -2017 to 2022, to deliver:

The programme comprise lifesaving food for more than 1.5 million people on the brink of famine will include treatment for up to 120,000 children at risk of dying from severe acute malnutrition.

It will include ongoing support to help keep 100,000 girls and boys in school to get a decent education, providing a brighter future for the next generation.

Also, safe humanitarian access to transport brave aid workers and deliver aid to the hardest to reach areas, for example using helicopters where roads are blocked or dangerous to use.