"An act of terror": At least 8 Dead after Truck attack in Manhattan 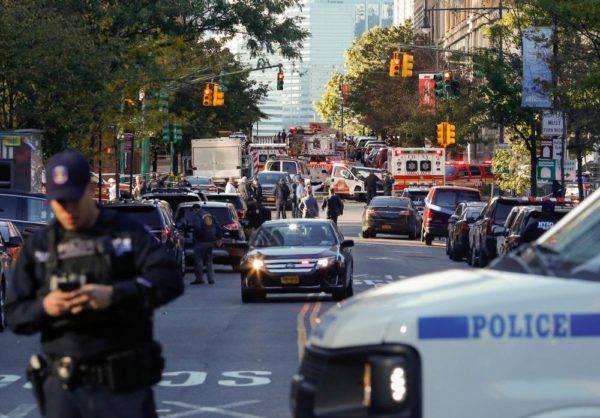 NEW YORK, NY – OCTOBER 31: NYPD officers respond after reports of multiple people hit by a truck after it plowed through a bike path in lower Manhattan on October 31, 2017 in New York City. According to reports up to six people may have been killed. (Photo by Kena Betancur/Getty Images)

A man in Manhattan has reportedly killed at least 8 people after he drove pick-up truck down a bike path close to the Hudson River.

According to the New York Times, the driver, in a Home Depot truck, drove down a lengthy bike path and hit numerous people before he jumped out with 2 fake guns and got shot by the police.

At least 11 people have been reported injured.

The driver, who is being treated at a hospital, also crashed into a school bus, although it is unclear if anyone was in the bus.

An eyewitness said he saw a man crash his white pickup truck and emerge from the vehicle at Chambers and West Streets.

The eyewitness said the front of the truck was smashed and the driver appeared injured. Somebody yelled, “He’s got a gun, run, run!” he said.

According to AP, New York Mayor Bill de Blasio said the incident is being described as “an act of terror” aimed at civilians.

“Banning open grazing is an invitation to anarchy” – Fulani Herdsmen