Dumebi Nwaokobia: Much Ado About Medicine 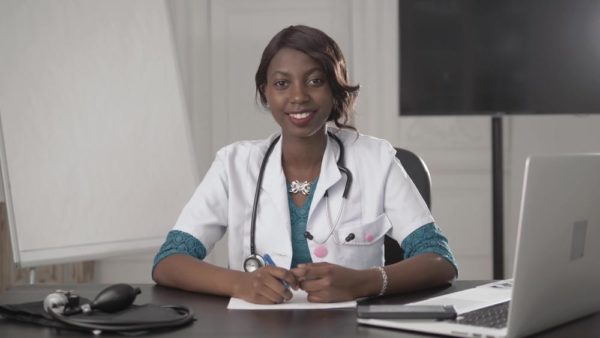 I was on the bridal party of my cousin’s wedding last weekend in Houston. It was such a beautiful ceremony! I got to see many of my family members that I hadn’t seen in a while.
Honestly, is it really a Nigerian party if no one talks about your weight? My dad was telling one of my aunties that I had gotten married just as I was walking into the living room where they were seated. “Is this Dumebi? Wow. I didn’t even recognize you oh. You’re now very fat”. I had not even gotten the chance to think of a suitable comeback before she continued: “Ohhhh! okay! It’s because of the baby right?” ‘What baby?’, I asked. I think she had started to sense how awkward it was getting: “Anyway, you’re even more beautiful. The weight fits you. You know, it’s not good for a young woman like you to be too skinny”, she said in a bid to console me. Too late; I had already found consolation in the freshly baked meat pie sitting on the kitchen counter.

What led me to writing this however, was meeting Nenye. Nenye is a Nigerian artist that had come for an art exhibition in the US. She’s friends with my cousin and was also part of the bridal party. I was fascinated by her person and paintings. I had never met a Nigerian artist, let alone, a young female one. It made me wonder how many people she had to fight to be able to pursue her passion. And this took me on a trip down memory lane.

I was visiting my high school a few months after graduating. It was our annual anniversary which was well attended by alumni.

All my teachers were happy to see me and know how I was faring in the University. This was only normal as I was an exemplary student – the pride of my teachers. I was supposed to go on to the university and study medicine like others that had gone before me. Or if the medical route was too tasking, Chemical or Petroleum engineering was a close second. And you know, if the second bests were too hectic, Computer Science was an acceptable third; after all, I had earned myself the ‘computer genius’ title that year when I helped my school win the state computer quiz.

It was the tie breaking question-“What is an Operating System?” We had only been taught the definition the previous day, but somehow I managed to remember-“Operating system is a suite of programs which resides in the Read Only Memory, acting as interface between hardware users and various programmers, performing the work of file management, memory management, input and output management.” I don’t know if it was winning the grand prize for my school or reciting my crammed definition like it was a rap verse that earned me the standing ovation; either way, I loved it and was going to milk it for the rest of the school term.  And so it was Medicine, Chemical/Petroleum Engineering and Computer Science, in that order. Anything different was substandard.

They had just rounded up the staff meeting when I got into the staff room. “So which school are you now?” My former class teacher asked. It was time for the serious questions after I hand handed over the Ankara materials my mum had given me for my favorite teachers. “I am in Babcock sir”, I replied. “Oh, Babcock has medicine now? That’s impressive!”, he added. I knew that I had to stop him now so I quickly cleared my throat.

There was loud silence in the room. I could see the disappointment on his face, and on all of their faces. They were saying the same thing without even speaking-‘You are such a letdown’. ‘It’s a great course sir’, I retorted in an attempt to break the silence; ‘it has elements of all the things I love’.  Then he finally spoke: “So you decided to just waste this your brain abi? okay oh. Congratulations, I wish you all the best.”

Why is there so much ado about studying medicine?

No doubt, Medicine is a very reputable profession all over the world. It takes a lot of investment to become a doctor and they are in turn compensated with high earnings. However, I believe we glorify medicine to the detriment of other professions, forgetting that all professions coexist to make the world a better place. The patient drives himself to the hospital, in his Toyota Camry xle, designed by an engineer, who was also aided by a supply chain analyst. He fills in his information on the iPad via an app designed by a computer scientist which was promoted to the hospital by the marketer and sales representative. While he is waiting, he notices how beautiful the paintings on the wall of the reception are, ‘this artist is so talented!’, he exclaims. The nurse goes to the doctor’s office to let her know that the operation room is set. The doctor doesn’t hear the knock immediately as  the music from her phone is a little loud. Apparently, the doctor has a habit of listening to Asa before an operation; she says it helps to calm and steady her hands.

But only the doctor is recognized for “saving lives”.

Back then, after your junior WAEC, you are placed into senior classes based on your results. The “intelligent” ones go to Science classes, while others are split into Arts and Commercial classes, regardless of their personal interests. Have we ever thought about the psychological effect this will have on a student in Art class who may now see himself as ‘not good enough?’ I know people that wanted to be lawyers but went to Science class for fear of being looked down upon as unintelligent. Likewise,  people who wanted to be pharmacists but were not allowed in science class because they got a D in Mathematics. Pray tell, how many of you pharmacists have used ‘Almighty formula’ to prescribe a drug to a patient?

As educators, parents and guardians, we need to do better. We have a duty to guide our children in the right path, or else we will end up losing out on the Chimamandas, the Raji Fasholas , the Aliko Dangotes, the Kanu Nwankwos, the Tuface Idibias and the Ngozi Okonjo-Iwealas, who are not medical doctors but excellent professionals in their respective fields.

How did you get into your current career field/course of study? Did you choose it or were you pressurized into it?

Adeyeye Ayobami: 5 Smart Ways to Start Business as a Debtor in 2018