Together with One Life Initiative & Youth Hub Initiative, BellaNaija Stopped the FGM Bonanza in Ilorin

A few days ago BellaNaija received a disturbing email about a man, Alhaji Adebayo, in Ilorin offering a bonanza to parents, to cut the genitals of their daughters.  This offer was posted on Facebook along with photos of the services he offered. To our shock and horror, this man was actually promoting female genital mutilation

We shared the story on BellaNaija {Click here if you missed him}, but we went on to try everything within our power to stop this situation. We reached out to Mr. Rotimi Olawale at YouthHub Initiative. Rotimi immediately swung into action, contacting everybody he knew in the region. The Youth Hub team immediately contacted the One Life Initiative, a non-governmental organization based in Ibadan.

It was this action that led to the eventual de-activation of Alhaji Adebayo.

We continued to rally up everyone within our network to ensure that this was stopped. Thus, it was with great pleasure that w received the following message from Mr. Sola Fagorusi at One Life Initiative.

“Following this story, we were able to engage with other actors we work with and also reach out to our partners in two radio stations in Kwara state to ensure that the issue is amplified in news form and also in form of analysis to ensure that residents are provided with the right information on the ills and dangers of Female Genital Mutilation.” 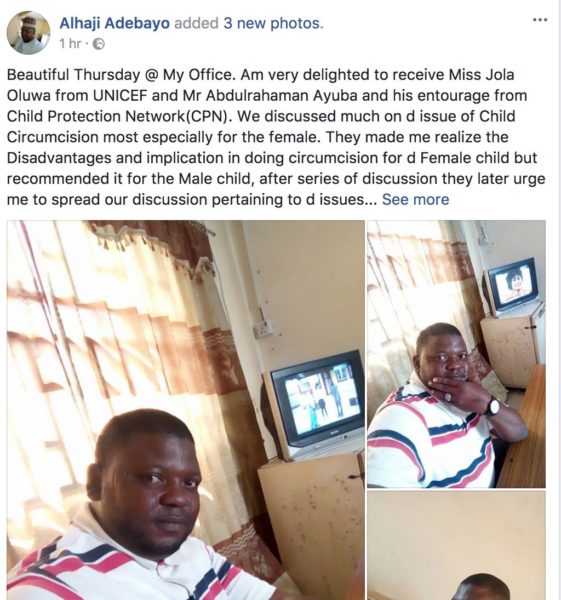 We thank Anuoluwapo Adelakun for sharing this story with us. She set off the chain reaction and by telling us about the situation in Ilorin, she has saved thousands of girls.

We truly appreciate you.

Special shout out to Rotimi Olawole, Jolaoluwa and Sola Fagorusi. Thank you so much for doing everything you could.

Cisi Eze: 10 Types of People on Your Whatsapp List