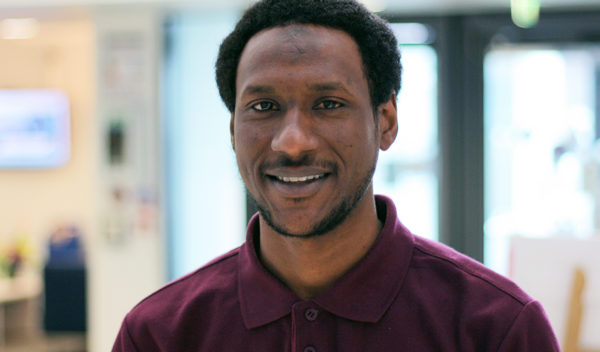 A new technique for identifying and diagnosing damage to the human retina has been awarded ‘Best Student Paper’ at the industry-leading BIOIMAGING 2018 conference in Portugal.

It’s hoped the new technique, which can separate the retina into seven distinct layers, could improve the accuracy and speed of diagnosis, and help save the sight of patients by identifying damage earlier.

Having taken inspiration from the psychological concept of similarity, Bashir used the ideas of continuity and discontinuity to develop an OCT algorithm that can identify where one layer of the retina transitions to the next.

OCT machines are used by ophthalmologists to produce non-invasive three-dimensional photographs of a patient’s retina, which are used in the diagnosis of eye-related disease.

“Layer segmentation is one of the early processes of OCT retina image analysis, and already plays an important role in clinics,” said Bashir.

“For example, the thickness profile of the Retinal Nerve Fibre Layer – which can be calculated directly from the segment layer – is used in the diagnosis of glaucoma, which is one of the most common causes of sight-loss world-wide.

“Automatically segmenting the layers could provide critical information for abnormality detection by comparing them to the average population, and monitoring the progress of disease against previous scans.”

Whilst doctors are currently able to identify the layers manually from OCT images, Bashir’s new technique automatically segments images of the retina, allowing specialists to spot abnormalities quicker and better track the progress of medication.

“It is evident that prior knowledge plays an important role in diagnosis,” said Bashir. “Therefore, using automated methods to look back through medical records or ophthalmology literature has great potential to influence how this field progresses.”

“Head or Heart?” Is the Question Toke Makinwa is asking on Today’s Episode of “Toke Moments”