"I can bet $10k she cooks, cleans, feeds her husband & is the average African woman at home" - Dencia says about Chimamanda Ngozi Adichie

Singer Dencia on Twitter has waded into the trending topic of Chimamanda Ngozi Adichie‘s question to Hillary Clinton.

Chimamanda had asked Hillary if it was her choice to identify first as a wife, according to her Twitter bio, and why, if she did choose to.

Social media users had kicked up a storm, criticising her for the question.

Dencia, on her part, has said Chimamanda is not a feminist. She wrote:

Dear chimanda, u aren’t a feminist if u are telling a female what to do.Weirdest thing is,chimanda’s followers I know don’t know she’s married with a kid.I can bet $10k she cooks, cleans, feeds her husband & is the average african woman at home.Let women live how they want.

Whatever her name is, the feminist lady who thinks like a backword clock

U’ll be surprised what most women think being a feminist is.let people just live their lives as humans cuz all these extra tags are getting y’all confused.Just be a decent human & live ur life how u please cuz ur faves are doing it the way it works or doesn’t work 4 them. 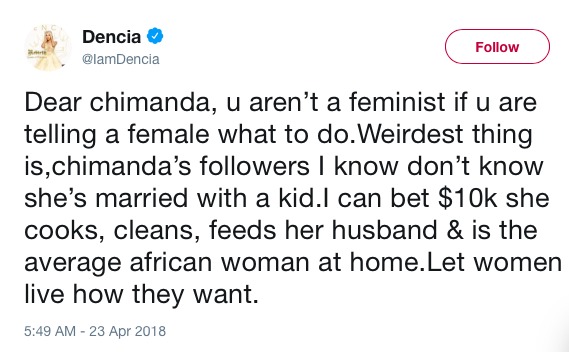 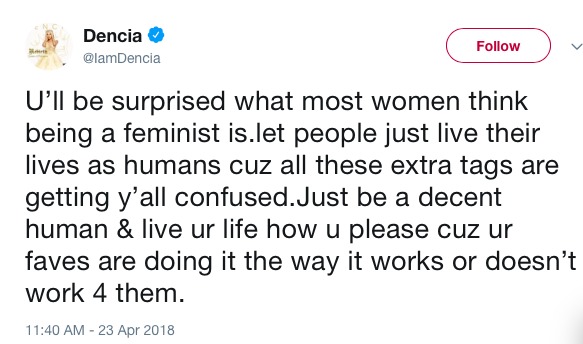 Was #BBNaija Finalist CeeC “Attacked” at the Airport? No!