Was #BBNaija Finalist CeeC "Attacked" at the Airport? No! 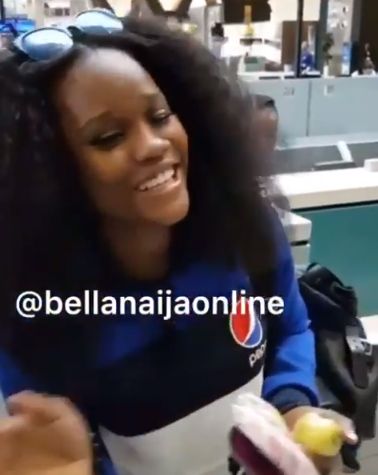 Except “attack” is now being defined as people trying to take a selfie with you or hug/hold you, as a means of showing love.

Clearly, the top five finalists have the most loyal fans. If not, they wouldn’t have made it to the final. People were already at the airport, per usual, with a marching band from #TeamTobi and other housemates’ fans in their  t-shirts, caps, e.t.c.

As the finalists left the aircraft, their fans (at this time, just immigration, customs and other airport staff) were screaming their names, hugging, and trying to get a selfie. It became worse as they got into the terminal. Mind you, only airport staff had access to them at the time. They were dragged, hugged, forced to take a selfie, and so on. One look at their faces, you’d see how shocked and overwhelmed they were by all the love they were getting.

It was mad rowdy! At some point, senior officials were sending other staff – immigration, customs and other airport staff away to their duty posts. The housemates had to be put in a lounge and locked away. They hadn’t even gotten to the mammoth crowd outside.

Finally, the place became less insane and they were moved out, to the protocol and security waiting for them outside. But it took lots of pushing, shouting, hugging, attempts to record videos and take selfies. And funny enough, in less than one minute or two, they were safely taken away.

This was what happened at Murtala Muhammed International Airport Monday night when the #BBNaija finalists got into the country. No one one was attacked. It was all love.

We should understand that at the centre of any news are news-makers, individuals, with families and friends and their own lives. Hence, anything we push out should pass the truth, accuracy, and humanity test.

“I can bet $10k she cooks, cleans, feeds her husband & is the average African woman at home” – Dencia says about Chimamanda Ngozi Adichie