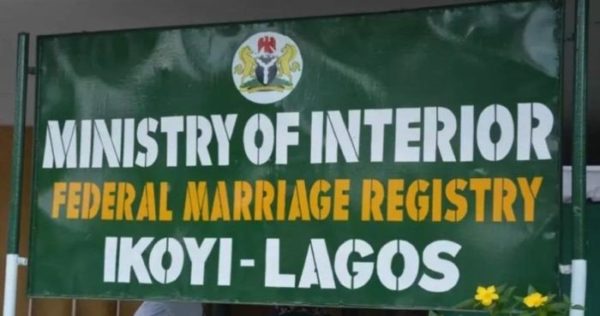 The Federal Registry, Ikoyi, will no longer be able to conduct marriage ceremonies or issue marriage certificates, the High Court in Lagos has ruled.

According to The Cable, a justice, Chuka Austine Obiozor, issued the registry a restraining order from conducting marriages.

It is unconstitutional, the order read, for the federal government to perform the duties of the state and local governments.

Local government and local council development areas of the state are the only legally binding bodies empowered to carry out such functions, the judge’s judgement said.

The Lagos State Commissioner for Local Government and Community Affairs, Muslim Folami, in a statement, said the order will be communicated to all stakeholders involved. He said:

We are going to use every available platform in the five divisions across the state to sensitize our people and inform them about this latest development; From Epe to Ikorodu, Badagry, Ikeja and Lagos Island.