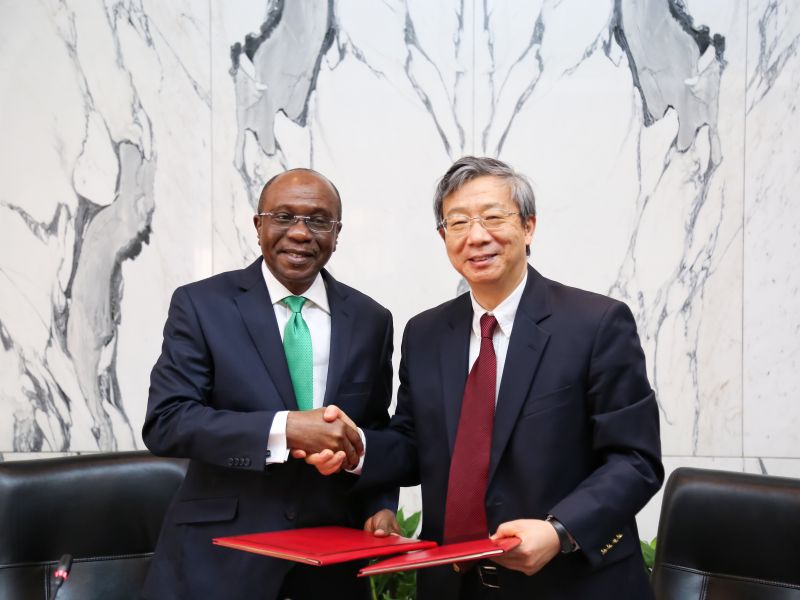 The Central Bank of Nigeria (CBN) has signed a currency swap deal with the Peoples Bank of China (PBoC) worth Renminbi (RMB) 15 billion (about N 720 billion).

The deal is the product of about 2 years of negotiation, as news about the deal first surfaced in April 2016 following President Muhammadu Buhari‘s visit to China.

“The agreement is valid for three years and can be extended upon mutual consent,” PBoC said

The transaction, which is valued at Renminbi (RMB) 16 billion, or the equivalent of about $2.5bn, is aimed at providing adequate local currency liquidity to Nigerian and Chinese industrialists and other businesses thereby reducing the difficulties encountered in the search for third currencies.

Among other benefits, this agreement will provide Naira liquidity to Chinese businesses and provide RMB liquidity to Nigerian businesses respectively, thereby improving the speed, convenience and volume of transactions between the two countries.

It will also assist both countries in their foreign exchange reserves management, enhance financial stability and promote broader economic cooperation between the two countries.

With the operationalisation of this agreement, it will be easier for most Nigerian manufacturers, especially small and medium enterprises (SMEs) and cottage industries in manufacturing and export businesses to import raw materials, spare-parts and simple machinery to undertake their businesses by taking advantage of available RMB liquidity from Nigerian banks without being exposed to the difficulties of seeking other scarce foreign currencies.

The deal, which is purely an exchange of currencies, will also make it easier for Chinese manufacturers seeking to buy raw materials from Nigeria to obtain enough Naira from banks in China to pay for their imports from Nigeria.

Indeed, the deal will protect Nigerian business people from the harsh effects of third currency fluctuations. With this, Nigeria becomes the third African country to have such an agreement in place with the PBoC.

Both the Nigerian and Chinese officials expressed delight at the conclusion and signing of the agreement and expressed the hope that it would boost mutually beneficial business transactions between Nigeria and the Peoples Republic of China.

On April 27, 2018, with the approval of the State Council, the People’s Bank of China signed a bilateral local currency swap agreement with the Central Bank of Nigeria in Beijing for the purpose of facilitating bilateral trade and direct investment, and safeguarding financial market stability in both countries. The size of the swap facility is RMB 15 billion/NGN 720 billion. The agreement is valid for three years and can be extended upon mutual consent.

Don’t Miss Out on all the Bridal Fashion at LBFW 2018 happening this Weekend, May 4th – 6th