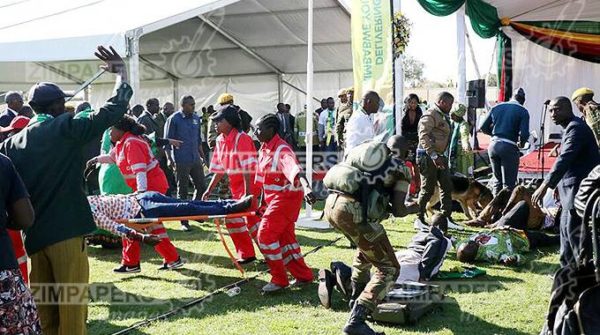 An explosion rocked Zimbabwe’s White City Stadium in Bulawayo the venue of a presidential campaign rally.

The country’s president Emmerson Mnangagwa was holding a campaign rally at the stadium when the blast occurred, and according to state-run The Herald, eight top government officials, including the country’s two vice presidents, sustained injuries.

Presidential spokesman George Charamba said: “President Mnangagwa has not been injured and is at Bulawayo State House. Investigations are underway and more details will be given to the public. There have been multiple attempts on the President’s life over the past five years.”

“Vice President Kembo Mohadi is nursing some leg injuries but he is in good spirit,” Charamba added in another statement to The Herald.

“Minister Muchinguri-Kashiri is still in a state of shock and she had some injuries around her chest. National commissar Gen Engelbert Rugeje had some shrapnel in his arm but he has been attended to and discharged. Mai Chiwenga had some lacerations on her face as she tried to rescue one of her aides who had shrapnel in her stomach.”

Charamba added: “VP Constantino Chiwenga had slight bruises on his face but he is fine. Four security personnel and some chiefs were also injured so all in all we are talking of 8 or 9 people who have been injured.”

Opposition leader Nelson Chamisa of the Movement for Democratic Change has condemned the explosion.

According to CNN, Chamisa said in a statement: “Our prayers go out to the injured and we hope no lives have be lost. Violence must have no place in our politics. May God bless and protect the country we all love.”

Mnangagwa was a former vice president who took over power following Robert Mugabe‘s ouster in 2017.

The country is set to hold its first election since Mugabe’s ouster July 30th.