#WorldCup: Iranian Women allowed into the Stadium for First Time in 38 Years to see Iran vs. Spain match 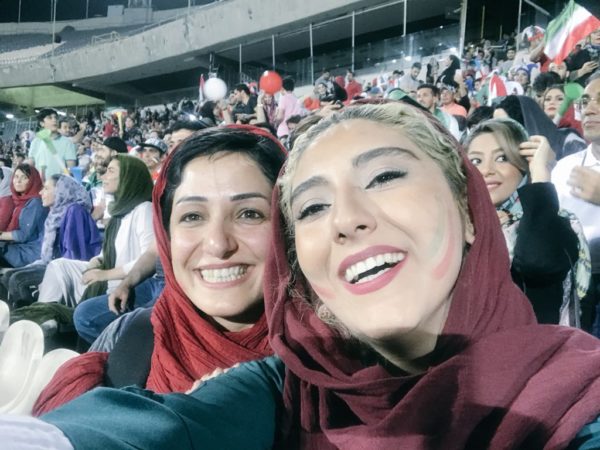 For the first time since a year after the country’s revolution in 1979, Iranian women were allowed into the Azadi Stadium to watch a men’s sporting event.

Fans trooped to the stadium after, according to NBC, the Provincial Council on Wednesday morning decided that women should be allowed into the stadium for a screening of their national team’s World Cup match against Spain.

The Iran national team had won their first world cup match since 1998, beating Morocco in their opening Russia 2018 game, and fans had trooped out into the streets.

The win had put even more pressure on the government to allow women into stadiums, and they finally caved.

A little difficulty was still faced, as police barricaded the entrance to the stadium and refused to let fans in. The match would not be broadcasted, they said.

Fans, however, remained outside, until the country’s Interior Minister Abdolreza Rahmani Fazli intervened and ordered that they are let in.

rare moment for Iranian women to be allowed into this big stadium, after the Interior Minister stepped in & ordered the police to get along. tho many alrdy left the evnt or decided to not go there as police was not allowing ppl over the last couple of hrs.pic.twitter.com/HmOA1iBPnP

For the first time in 37 years, Iranian women have been allowed to enter Iran’s stadium to watch the World Cup action on the big screen. ?? pic.twitter.com/yapQytfdsz

Rare! Men and women having fun together. Yesterday, there was plenty of that in #Tehran at the public viewing #WM2018⁠ between #Iran #Spain in Azadi Stadium. It was actually canceled at the last minute, but fans stayed in front of the stadium and protested until gates opened. pic.twitter.com/8UUQL8wI4J

#WorldCup: Senegal Fans Cleaned Up Their Part of the Stadium after their Win against Poland