#WorldCup: Senegal Fans Cleaned Up Their Part of the Stadium after their Win against Poland 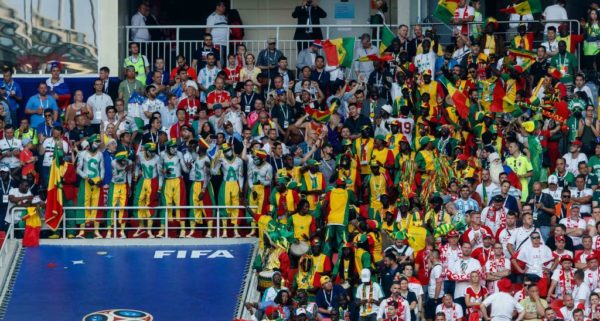 MOSCOW, RUSSIA – JUNE 19: Supporters of Senegal are seen during the 2018 FIFA World Cup Russia group H match between Poland and Senegal at Spartak Stadium on June 19, 2018 in Moscow, Russia

Senegal did not just become the first African country to win their first match in the world cup, but they showed the world that they came hard for the cup and they brought their ethics alongside with them.

The world cup has a lot of economic benefits for Russia but it also has a lot of environmental detriments due to the amount of waste deposited by millions of visitors to Russia.

Russia has a lot of measures in place to cop the amount of waste and this includes  15000 volunteers for the sole aim of keeping the stadium clean but let’s just say Senegal supporters thought otherwise.

According to videos shared on social media, Senegal’s supporters stayed back to clean up their part of the stadium after cheering their team to victory.

Japan was the first country to actually pick up their litter succeeding their football match with Colombia. The supporters of Japan came with bin bags and cleaned up their part of the stadium.

This is my favourite moment of the World Cup so far; Japan fans picking up litter after their victory vs Columbia. The lessons in life we can take from the game. Why I support ?? #class✅#respect✅#WorldCup pic.twitter.com/FyYLhAGDbi

This simple act of kindness has got the whole world celebrating Senegal. One thing is certain, the entire stadium would be litter free when Japan and Senegal compete against each other on June 24.

Related Topics:PolandRussiaSenegalWorld CupWorld Cup 2018
Up Next

#WorldCup: Iranian Women allowed into the Stadium for First Time in 38 Years to see Iran vs. Spain match

Britain could loan the Benin Bronzes to Nigeria Temporarily