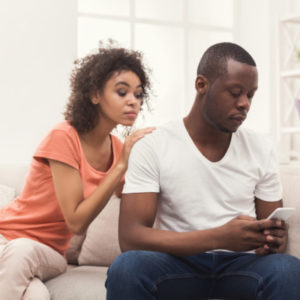 The saying Curiosity killed the cat is a common refrain here, though it doesn’t always work out that way. One common line that accompanies the saying is What you do not know will not kill you.

However, in today’s relationships, I prefer What you do not know might actually kill you. Simply put, that phone-check might actually be the life saver informing you that your spouse is treating an incurable illness, or that you are girlfriend no 2 in his harem of 10.

I am a bit of a fence-sitter in this regard, but definitely lean towards the checkers. In previous situationships, I have checked my boo’s phones (in fact, I still check. Reminder to self to keep this article far away from hubby).

Phone checking made me realize that the boo and I had broken up. This was news to me, considering the fact that we were still carrying on as though we were in a relationship. While going through his phone activities for a period during which I was out of town, I came across a series of chats with an unknown woman where he claimed I had broken up with him!

Me? Me that was still building romantic castles in the sky and sending toasters far away was the one that initiated a break up? Fear Sweet Boys Association members. That was the end of our relationship, and I would have been living in a fool’s paradise if I had not checked his phone when I did.

There are people who give you free reign over their phones and have a justification for every text and or picture you come across. I am in this class because I believe there is very little I should have to hide about my electronic activities (excluding bank statements, of course) from someone I claim to be in love with.

Then there are those in the extreme category. They protect their phones with their lives, using multiple passwords, finger swipe, eye identification, etc., just to prevent their partner from finding out what they are up to. They carry their phones everywhere including restroom breaks to forestall the unlikely situation of it being hacked into. People like this should be feared. I mean they are not to be trusted. What on earth could they be hiding that much?

In as much as I realise that privacy should be respected as much as is possible in a relationship, I also know that there are times hidden information can be obtained by snooping around discretely which would be to the snooper’s advantage. The problem now arises when this snooping becomes a habit and affects your relationship adversely. At that point, trust has been erased and the purport of a loving bond is lost. The ideal situation for me would be where both spouses can trust each other enough to forgo passwords and allow the other browse their phones without any prior notice. After all, if there is nothing to hide, why the need to be extra careful?

So what is your take on the matter? Do you check your spouse’s phones? And to what extent? Whatsapp, BBM, text messages, Instagram/Facebook/Twitter DMs, emails? Where exactly do we draw the line? Does phone checking automatically signify trust issues or is it a regular part of any budding relationship? Share your thoughts.

Related Topics:lovePhoneRelationshipsSocial Media
Up Next

Five Nigerian Men Talk About Their Besties & It’s So Cute!