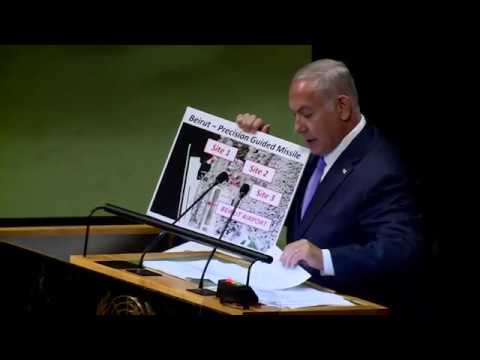 Israel’s Prime Minister Benjamin Netanyahu has accused Iran of having a secret nuclear warehouse in his speech at the 73rd session of the UN General Assembly, warning that Israel would act against Iran “wherever and whenever.”

He also said there were Hezbollah precision missile sites hidden in Beirut.

He accused the International Atomic Energy Agency (IAEA) of failing to investigate findings he reported to them about Iran’s nuclear programs.

He added that he had reported a nuclear archive located in the Turquzabad district of Tehran in April.

The site warehouse is used for “storing massive amounts of equipment and material from Iran’s secret weapons program,” he said.

He attacked Palestinian authorities for paying monthly salaries to convicted terrorists while praising Donald Trump for pulling out of funding the UN agency for Palestinian refugees.

Watch the full speech below: