Kingsley Obom-Egbulem: So You Want to Date a Single Mom? 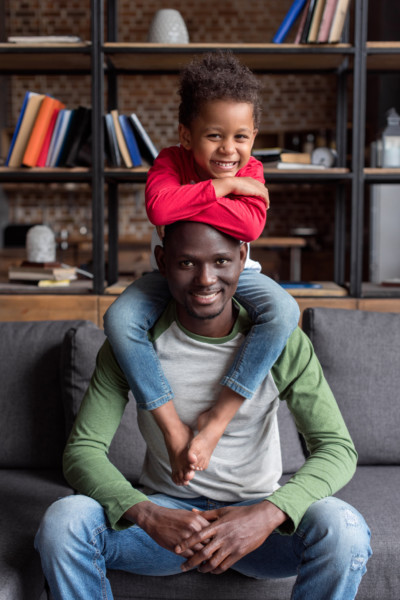 Whenever I have the privilege of counseling guys who are engaged to get married I usually encourage them to assume they are planning to marry a hardworking, single mom. I do this when the discussion shifts to the responsibility of a husband and the need to rise up to the challenge of leadership every husband must face.

“Let’s assume you are dating a woman who is already used to taking critical decisions for her two daughters or sons and needs; someone who needs not just someone to have regular sex with, but a great leader, a loving father and a role model to her kids. Are you prepared for this?” I often tell these guys and watch as they grow quiet on me, their countenance shifting as they try to come to terms with getting into the role I just painted.

Of course, very few of our men are that prepared when they start considering marriage. Aside from getting someone to help them with their issues (one of which could be financial) and then the regular availability of sex with little or no hitch, most men don’t understand the leadership challenge of getting married, let alone to a single mom. Hence, I always ask them to imagine they are about to get married to a focused, hard-working, single mom who is trying to make money, build her business or career, raise great kids, give them the best and be their role model.

How did I get to this point?

I got to this point the day I had a heart-to-heart conversation with a friend who had just broken up with her fiancée and was evaluating the lessons learned from that relationship.

“I strongly believe he doesn’t understand the implication of marrying a lady like me,” my friend said. “Something tells me he is still intoxicated about my looks and with the fact that I don’t look like a mother of two grown-up girls, but it hasn’t dawned on him yet that he is going to become a father as soon as we get married and I doubt if he understands that,” she added.

“Hmmm, I’ve never thought about that, you know,” I said to my friend, my mind racing back to when I got married and comparing my thinking then with who I am today as a father of two biological and two adopted kids. Could I have been this mature 15 years ago without being married? I’m not sure. But we need to find a way to help men grow up and ready for fatherhood and leadership at home even before they start preparing for marriage.

Single moms also are concerned about the safety of their kids. For instance, my friend wanted a man her daughters would feel safe around, who would not see them as people to prey upon one day. “Kingsley, that is one fear I couldn’t open up to him about. And I would rather call off the relationship than marry a man I won’t be able to leave my daughters alone with.”

Getting married is definitely the dream of many single mothers, even though they may not say it all the time or wear it on their faces. The truth is they desire to get married; they want someone their children will call daddy and who also has what it takes to call them “son” or “daughter.” Don’t get me wrong, marriage is not some Eldorado and it is not even the goal of many single moms. And I think that’s ok.

But that does not mean every single mom wants to remain single? Many of them want a husband. However, that they need a husband doesn’t mean they want to adopt a “Baby Boy” parading as a husband. Many single moms know what they want and will not settle for less. As a matter of fact, for them, the standards are higher for obvious reasons.

“I love my kids and I cannot stand anyone who cannot accept them unconditionally, respect them and love them wholeheartedly,” my friend told me.

I think this is understandable.

Because after being widowed, divorced, separated or like in most cases moved from being a teenage mom for so long, many single moms have come to build their lives around their children. They (children) have become the only thing that gives them meaning. So, any relationship they go into is evaluated and determined from the children’s perspectives. Would he love them? Would he accept and care for them as his own and be man enough to have them call him daddy? Would they love him? Can they relate to him and accept him as their dad?

These are questions that occupy the minds of most single moms as they work toward getting married. But are there guys who have never been married who can fit this bill? They are rare.

“Some show up and look like it but the moment they meet your kids, they are challenged and their shortcomings start to manifest. The next thing is they start to withdraw until they eventually disappear. When that happens I simply thank God and move on,” my friend said.

Many single moms have been fortunate at times and saved from impending tragedies and heartaches when they run into a guy who is focused, with a vision, responsible, God-fearing. But the moment it dawns on him that she has a child that he must be a father to, reality begins to set in. And the guy finds his level.

He starts to hear and listen to strange voices: “Can you cope? Do you want to start raising kids even before your marriage starts in earnest? What if they don’t like you and cannot tell you how much they don’t want you around them? Don’t fool yourself trying to love and train them, when they grow up, they will still ask for their real father? What if she cannot bear a child again and this is the only child she will ever have? Will they bear my name? What will my mom say? What will my siblings and even my friends say? Won’t they laugh me to scorn? Do I really have what it takes to love this woman and her kids? She is even older than me; should I break this relationship now or move on and trust God that I’ve made a good decision?”

This gives an inroad into the mind of a man who is about to commit to a single mother.

Despite these puzzles they must try to resolve, many have made the commitment, and today, the families are happier for it. Some have not been too lucky. It’s either the man underestimated and thought he could cope with the emotional, psychological and sometimes financial and spiritual demands of marrying a single mother, or he just was not the right person in the first place.

Some single moms have made a hasty choice and ended up with the wrong man all in the name of ending their loneliness and getting a father figure for their children.

Hence I often I ask: “Do you really need a “father figure” or a man who is ‘man enough’ to be your husband, who loves, respects and protects you, and who becomes a mentor, coach, and father to your children?” Like we have come to realize, a father figure is just what it is: a figure. And you really do not want that for your kids.

While the search is on, it is imperative to state that there are key factors every man dating a single mom must note. Because most single moms are very protective of their children, I think you must be ready to answer questions about your past, especially issues centered on crime, indulgence, sexual violence, and exploitation. Single moms need to be sure they can trust you with her kids. You should be ready to prove and demonstrate your love for her kids and she can spot that by how much love you are currently showing to your nieces, nephews and other children around your neighborhood.

Also, because she has made so much emotional investment in her children over the years, she would require time to gradually warm up to you and start to make you the main focus and desire, asides her children. You must understand this.

Like I gathered from my friend, it is stupid to assume that single moms are sex starved. They are really not, so getting into a relationship with a single mom and proposing marriage to her a few months after, just for physical reasons, would simply give you off as dense and infantile and no woman wants to put up with that.

Dating a single mom may be a slow and steady process but well worth it in the end. And that is because the issue of responsibility must be proven beyond reasonable doubt. I have seen couples struggle (and break down) doing the usual early morning waking up, cook breakfast and lunch, wake the kids, bath them and dress them up for school routine. But for a single mom, very early in the morning, you would have had your bath and meals packed. You would have cross-checked homework you both did the previous evening, dotting the I’s and crossing the T’s as you open the car bonnet to check for oil and water.

This is one woman’s daily routine. No husband, no housemaid and some couples are breaking down even with two househelps. I wonder what else we call responsibility.

To this end, I feel single moms should hold their heads up high and set the terms when choosing a partner and husband. The reasons are not far-fetched.

There are single men who truly understand all the demands you are juggling as a single mom. They respect you for your responsibility, and they will be flexible and understanding. Of course, the reverse is also true: Being a man does not necessarily mean you’ve the nerve to cope with a woman who has been playing mom and dad.

Generally, I advice single moms to be circumspect when choosing a man, especially if you have daughters. Also, be careful of men with infertility issues. I do know that some men actually marry single moms just so they can conceal their infertility. Sister, please “shine your eyes.”

#PVCitizen: Check the Voters Register to Confirm Your Registration