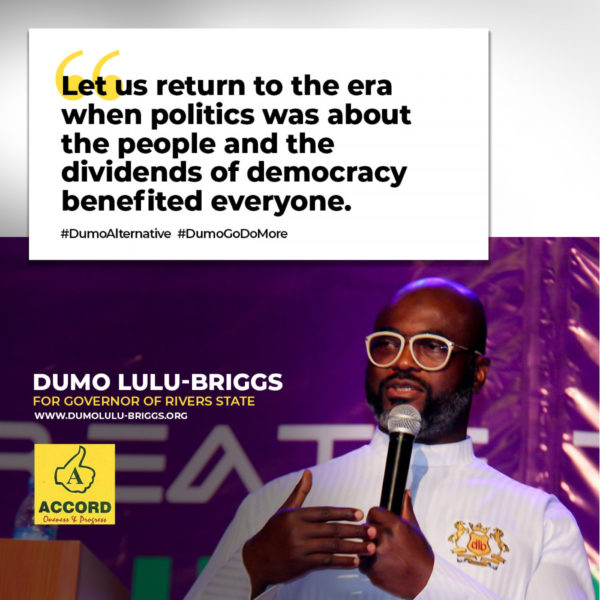 Our dear state is at the threshold of history as we approach the forthcoming polls, especially the governorship election scheduled for March 2nd, 2019. I see a new dawn – a turning point.

Rivers State has lost its rightful status in the comity of Nigerian states as a result of the actions and inactions of its political leaders since 1999. For almost two decades, Rivers State has had governors and leaders who use our people as ladders to climb to power and dump them afterwards, as worthless observers.

Twenty years is such a long period because majority of our active population between the age of 18-35 years, were either not born in 1999 or too young to know that Rivers State once had a glorious era, propelled by patriotic leaders. These leaders transformed the state into a preferred destination for Nigerians and foreigners alike. Life in Rivers State was never as it is today.

Our people have been impoverished and traumatized, leaving a large segment of the population poor and homeless; the elderly are abandoned; majority of our youths are jobless and a large percentage of our children are out of school. Our people are made to see crumbs as real meals, but it has not always been this way.

Our founding fathers toiled to have Rivers State created by the military administration of General Yakubu Gowon in 1967 with great expectations that their efforts would usher in limitless opportunities and boundless prosperity for our people.

The pioneering military administration of Navy Commander Alfred Diette-Spiff laid a solid foundation for the state in human and infrastructural development and this was complemented by the civilian administrations of Governors Melford Obene Okilo and Rufus Ada George. That was the golden era of Rivers history.

Incidentally, the years between the Diette-Spiff’s and Melford Okilo’s administrations were the formative periods of my life. It was a period when governance was effective and the institutions of government and society were very supportive. Although life was very tough for my family, the governance and societal structures of the time supported me to be the person that I am today.

These leaders worked assiduously, some with their blood, to make Rivers State the envy of Nigerians – a land of love, peace and freedom. Their achievements are engraved in the annals of time and the expectation was that succeeding administrations would key into the landmark achievements of these great leaders, but that was not to be.

Since 1999, a different kind of political leaders who do not share the intrinsic values of  patriotism and selflessness as espoused by our founding fathers, has dominated the political space of Rivers State, entrenching, recycling and multiplying themselves.

Rivers State is now a shadow of its glorious past and the founding fathers that are still alive are in shock that in their lifetime, the gains they achieved for the state have been so drastically reversed, while those who have passed on are turning in their graves.

It is indeed a travesty of natural justice that a state as endowed in human and natural resources as Rivers State can have its people so marginalized and pauperized. There is no gainsaying that the problem of Rivers State is that of political leadership. 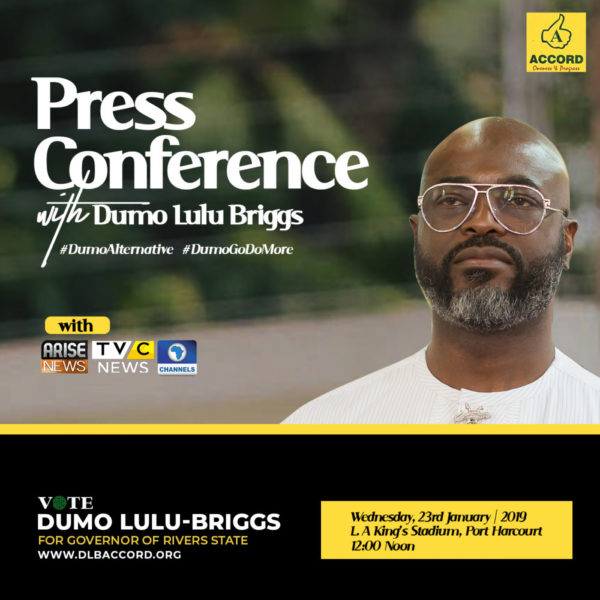 I present myself for election as Governor on the platform of the ACCORD. I have no godfather but God the father. I desire to take us from this era of policy implementation deficiency to the place of healthy and vibrant institutional governance; where no man, no matter how connected, can be bigger than any state institution.

The task to rescue Rivers State in 2019 must be achieved across political party lines, although those who have held the political space captive would strive to hide behind party colours and party logos – the instruments with which they have held unto power since 1999.

I say to you that there is no other power that would decide who becomes governor of Rivers State in 2019 except the votes of Rivers people under the guidance of God.

2019 should not just be a transition from one governor to another governor or from one party to another. It should be a turning point in our history -a defining moment that alters the future of Rivers people from the current disorder, pain and tears to an era of prosperity that leaves no Rivers person or resident behind.

The baton of political leadership has to pass to a new set of leaders that would unite with Rivers people to fight hunger, disease, illiteracy and tyranny as common enemies.

It is a glorious morning yet on Election Day. 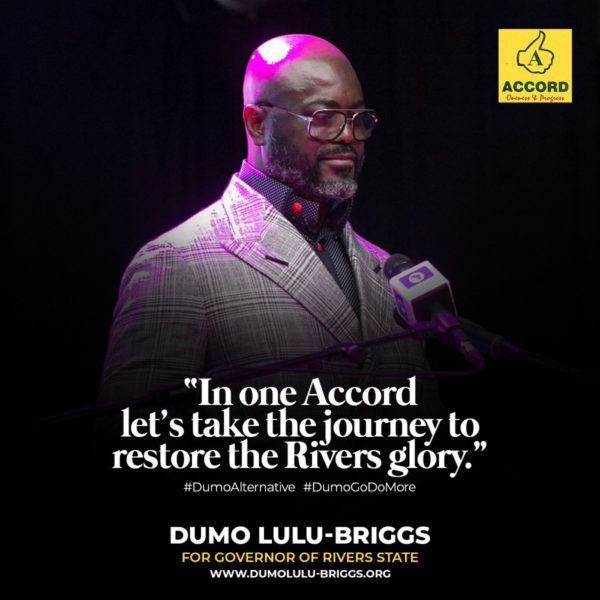