Canada Did Not Beg Nigeria for 1 Million Immigrants 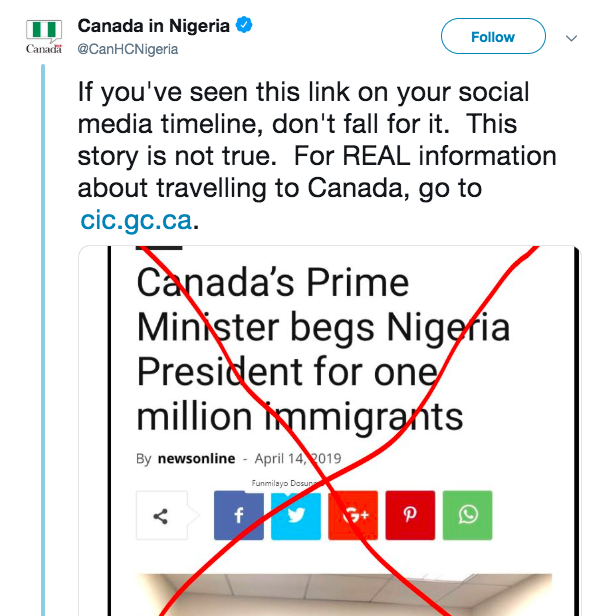 Yesterday, a certain story made the rounds on social, quoting one Shadrack Scott, who was said to be a spokesperson for the Canadian Labour Department, asking that Nigeria allows at least 1 million of its citizens to occupy the over 6 million jobs in Canada.

Several reactions followed: from those who were ready to leave, to those who doubted the authenticity.

That's just being diplomatic. If he really wants one million we are already packed. We don't mind standing in the plane.

This request should be looked at critically. Because ,locals may one day wake up and xenophobic attacks will begin.I no fit shout o! I love my naija like that.

Naija I hail thee. I am sure that website won't last 3 hrs, by the time we start applying even cyberspace will experience a hurricane.

Beg bawo? Or they should just reduce their visa fee and ask their national air lines to also reduce tickets fees and let's see if in the next 72hrs I never dey inside Canada. Abeg make them dey serious first.

The Canadian Embassy in Nigeria has now described the news as fake, calling on anyone interested in migrating or travelling to Canada to find real information on cic.gc.ca.

If you've seen this link on your social media timeline, don't fall for it. This story is not true. For REAL information about travelling to Canada, go to https://t.co/nvOkvSQzt4. pic.twitter.com/ct2CIqaj05

Over 4,200 Nigerians were approved for permanent residency in Canada in 2017, which is almost double the number from the year prior. Nigerians in Canada make important contributions to both countries.

If you see a story online about moving to Canada that seems too good to be true – shine your eyes well-well o!!! @PremiumTimesng @MobilePunch @vanguardngrnews @daily_trust @HOTFMNIGERIA

Child Bride, 15 in Custody for Allegedly Poisoning Husband in Kano