Lt. Victor Agunbiade Gets a Commendation Medal for His Meritorious Service in the US Navy ?? The United States Navy has awarded a Nigerian officer, Lt. Victor Agunbiade, its medal of commendation for his meritorious service. Victor Agunbiade is a Nigerian currently serving as a U.S. Navy Reserve supply officer at Camp Lemonnier in Djibouti after emigrating to southern Minnesota from Nigeria.

He was awarded the medal for judiciously managing the US Navy’s largest oversea disbursement. The US Navy said Agunbiade effectively managed its largest cash disbursing office handling $45 million (N17 billion) in a cash transaction. 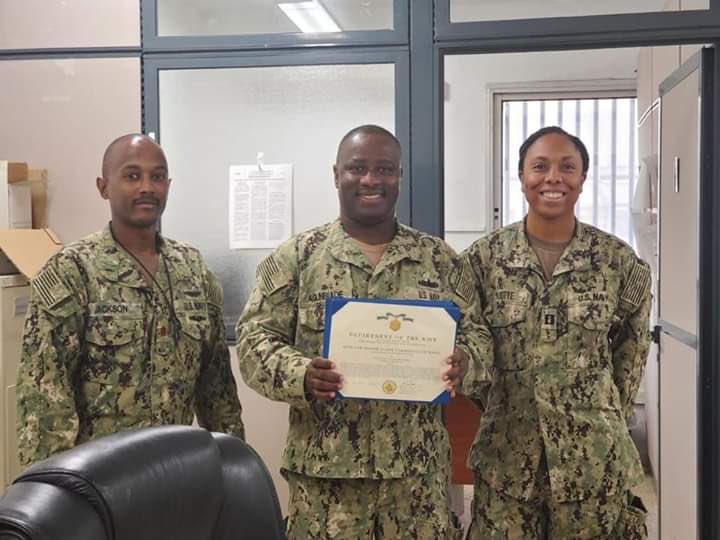 The award certificate read in part:

By his unswerving determination, wise judgment and complete dedication to duty, Lieutenant Agunbiade reflected great credit upon himself and upheld the highest traditions of the United States Naval Service. 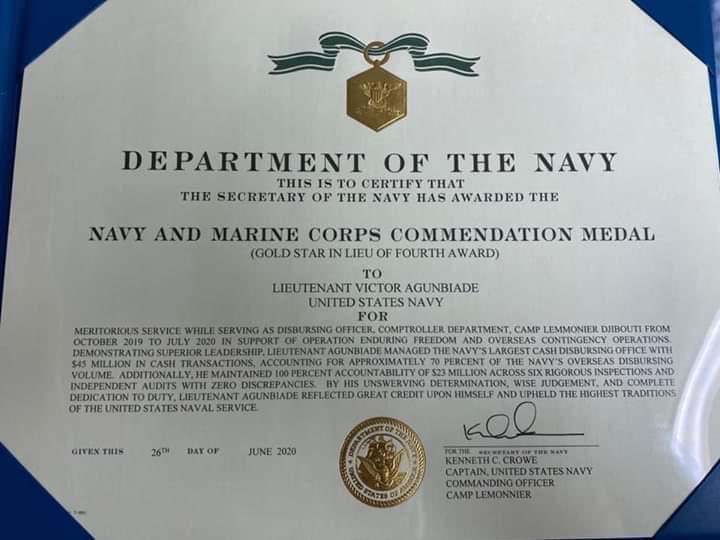 The US Navy has awarded the Navy & Marine Corp Development Medal to Lt. Victor Agunbiade for exemplary accountability while managing it's largest overseas cash disbursement office. Agunbiade managed $45 million cash with every dollar accounted for. He migrated to the US in 2007. pic.twitter.com/rOqvdRnoji

Agunbiade enlisted in the Navy as a storekeeper in 2008 and was commissioned as an officer in 2013. During an interview with DVIDS earlier this year, Agunbiade acknowledged his success in the Navy to the lessons he learned in Nigeria and his adopted hometown of Lake Crystal.

One key lesson in life is to treat people with respect. Always give your best in what you do—my dad taught me that.

He joined the Navy 12 years ago as an enlisted member and became a U.S. citizen a year later, “While I didn’t join for that reason, becoming a citizen has been a blessing and a bonus and I’m proud to have given back to the Navy”, he added.

He’s the first member of his family to serve in the military, he has hopes that his son will consider choosing the Navy for three distinct reasons.

First, I hope he does it so he can appreciate what the country has given our family. Second, it will teach him respect for diversity, and third, I hope he does it because this uniform has changed my life and I know it can change his for the better, too.

According to Victor Agunbiade, the best about being in the Navy “…is the travel, especially when I was on a ship. I’ve been able to visit 30 countries without paying anything out of pocket.”