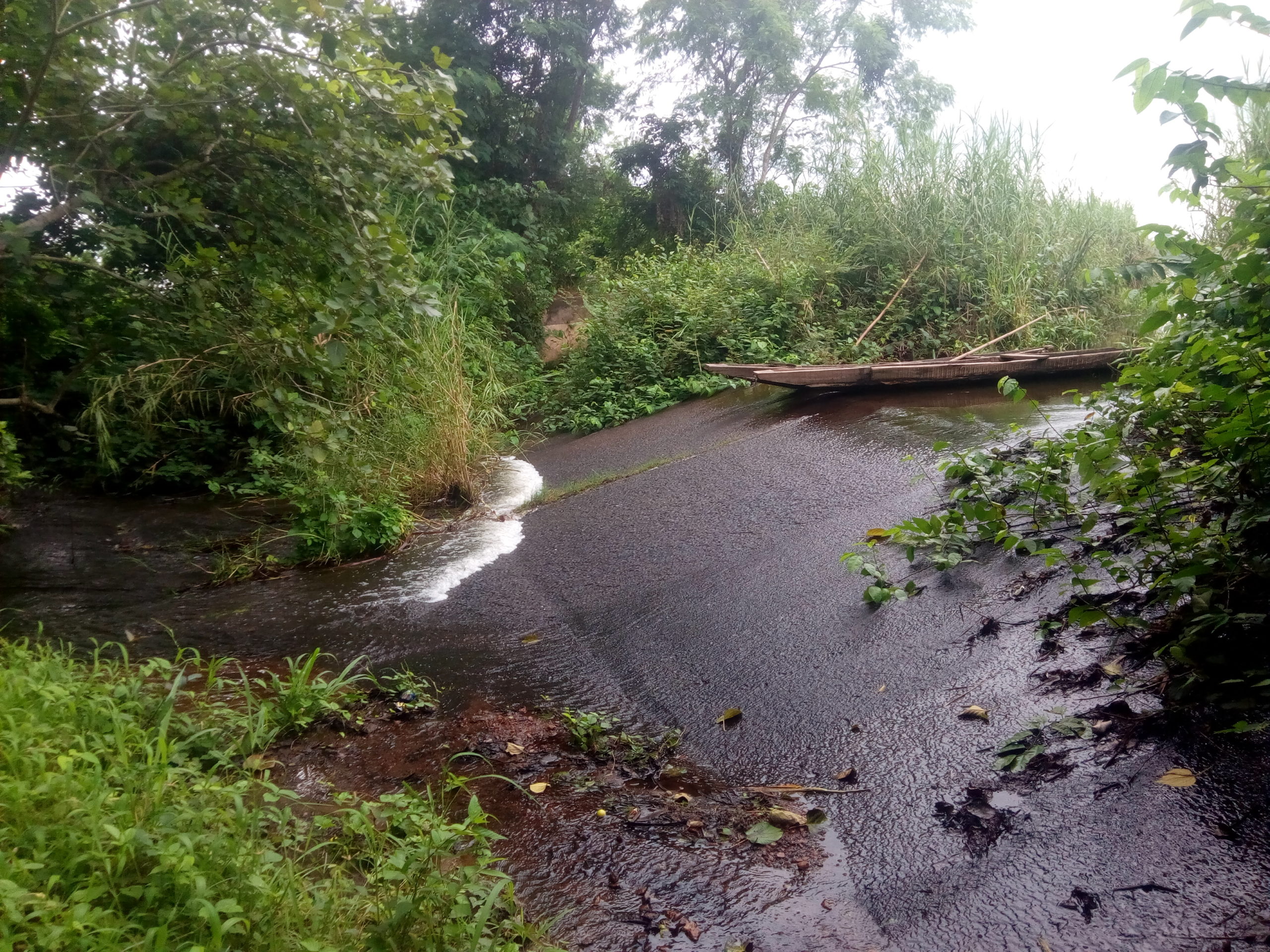 I sit lonely on the sloping concrete that slips into the river with my legs deep into its water. This river has taken over this wide space for as long as the creation of Iwo town. Now, the water spreads widely before me, into an extreme place I can’t imagine.

My mother told me that her mother told her that her own mother told her it was just a small water settle that was dug a little by the hunters who wanted to drink water on their way to hunt and since then, it had expanded, with the intervention of the government, until it became this large river with no end. Every year, two souls drown in it as rituals for forcefully giving it space. Still, people came here en masse.

The last time I came here, three years ago, was when one of my cousins visited us from Ondo and insisted on seeing this river before she left. When we came, there were big boys and girls chattering and shouting, exchanging marijuana and hard alcoholic drinks or ogogoro in small bottles. There were some of them swimming far away in the wide river, competing with one another to reach a spot they’ve never reached before. There was, at a secret side in the bush that breached the view of the river from the other side, a boy and a girl having sex on the banana leaves they might have plucked on their way. They did not care people might see them. They were enjoying themselves because they were free. If we had moved further away from the spot we stood that day, there would have been two girls or two boys having their desires, hiding from the outside world from people that might see and report them. This river was an escape and everybody had their spots.

I do not enjoy coming here despite the fact that it lives some inches away from where I live because there isn’t a spot for someone like me. Or, maybe there is a spot, but I choose not to own it because even if all you come to do is watch, you can do so for as long as you desire and even fetch home memories. But I am here today because my room, where I am surrounded by everything I need – books, my laptop, my phone, and so on – has become a strange place. Probably because when you hold on to something or a place you like for a very long time, it becomes weird. And when usual becomes weird and weird becomes usual, like passing through a school and being greeted by a locked gate, it means the world has morphed into strangeness.

There are many ways COVID-19 has affected me, but its impact on my emotional state tops it all. I find myself longing for things I dislike and denying things I love doing, except reading and writing, because they have become a part of me. That is why I write this now, with Pettina Gappah‘s The Book of Memory on my laps, serving as a slate I place my foolscap on.

I imagine lockdown touching the significant places – markets, bars, brothels, religious houses, including schools which forced my present stay here. But I can’t imagine how its hand spreads down to little places like this river. This river where you can get high just by inhaling marijuana. This place where you can watch pornography without downloading it with your data. This place where lovers are free. This place where freedoms (body freedom, personal freedom, social life freedom) exist, not in a large, open, modern place but in a small, simple, primitive space as the bank of this river. I imagine how much of people’s freedom – those that are hidden from us, those that are inexpressible – are being locked in rooms, probably dying.

When this is over, I imagine this river bringing people together again, giving them their joy and freedom. But I am stuck with the question of when. When will this be over? When will people become free again? What if they die and this river becomes deserted forever? What if, in the end, life doesn’t go back to normal because normal might have become bizarre, and bizarre might have become normal?

I feel for this place what I feel for people who have been inhumed by this virus. The noises, the smokes, the splatters of its water – all gone within a twinkle of an eye. If the virus can affect small places like this river, imagine how much it is affecting the world beyond what we can see or reach.

As I sit, I see a fish swimming around freely. That is the irony of life: while some souls are being imprisoned, others get their freedom.

BN2020Epilogues: Ogechi is Acknowledging Every Little Blessing of the Year

Ahmad Adedimeji Amobi is a Nigerian writer and an attendee at Olakunle Ologunro's Creative Writing Workshop. His works have appeared or forthcoming on Hobart Pulp, FlashBack Fiction, Litro UK, The Kalahari Review, Sub-Saharan Magazine, and elsewhere. His Twitter handle is @ahmad_adedimeji but he doesn't know how to handle it.