Through "ChessinSlums", Tunde Onakoya is Changing the Lives of Children One Piece at a Time 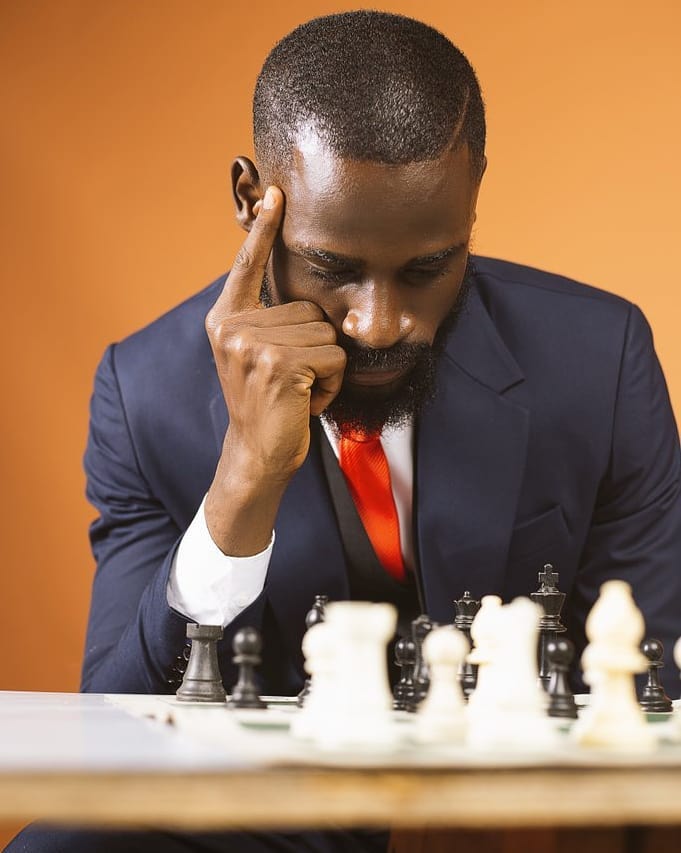 According to UNICEF, one in every five of the world’s out-of-school children is in Nigeria and over 80 million Nigerians live in extreme poverty. A quick visit to certain slums in Ikorodu, Ajegunle, Mushin, Ajah, communities like Makoko, Mafoluku Olowolagba, Majidun, and many more areas in Lagos, and you’ll see barefooted children running around in their panties, shrieking excitedly as they welcome you in anticipation of whatever goodies you might have brought with you.

For many people, poverty is abstract; it is what we hear in the news and say “eeyah” to. It is what we see in newspapers and decide to donate a naira or two for. They are places we visit once in a year, flapping sacks of indomie and groundnut oil over our shoulders to distribute to underprivileged people.

But for others, it is different; they sleep at night thinking of how to change the lives of children living in slums and they wake up each morning, taking steps to ensure that these children have a chance at life.

One of such people is Tunde Onakoya. 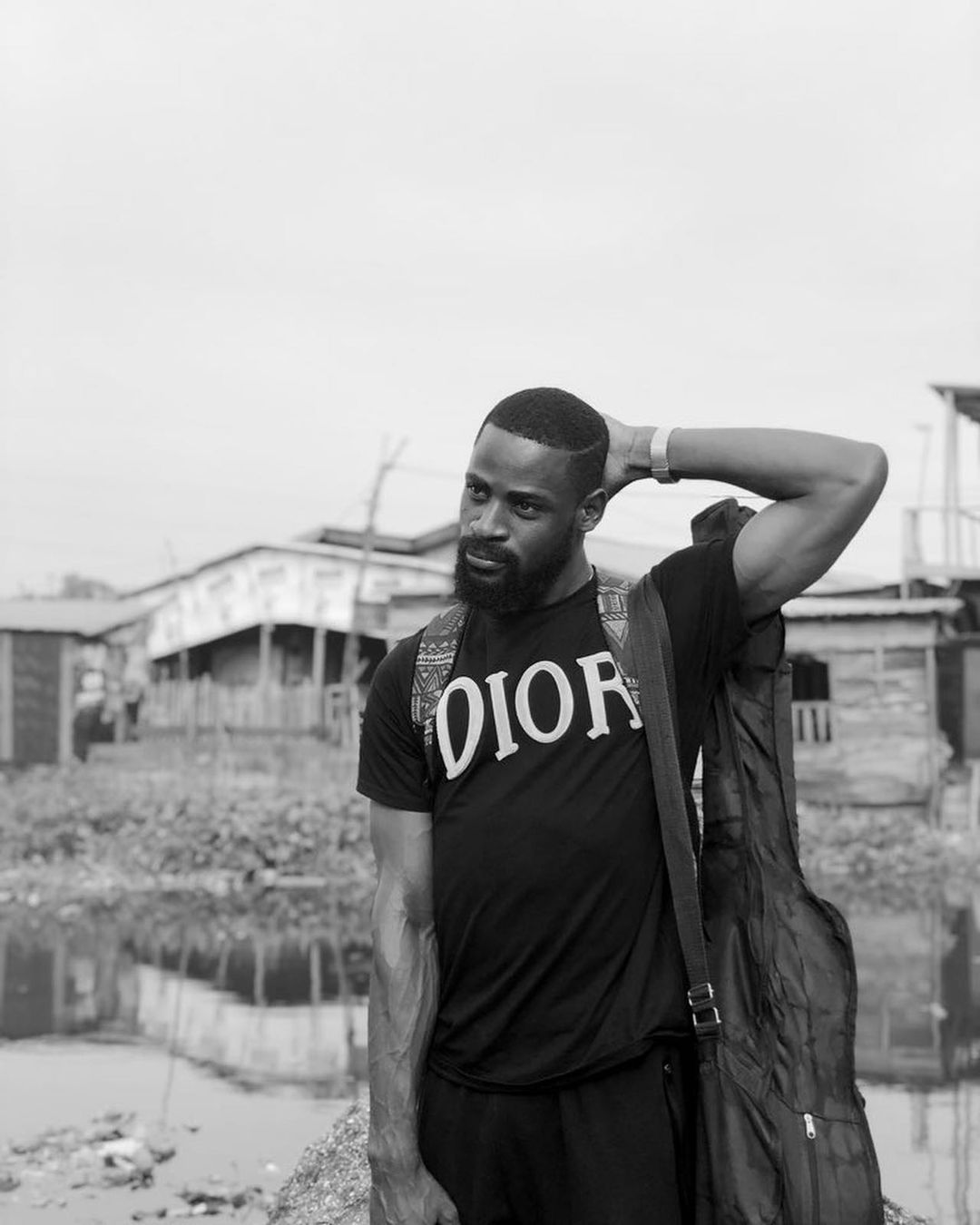 Years ago, I watched the Queen of Katwe and I, like millions of other people who have watched the movie, was moved. Perhaps it is more touching because it is a true life story, but it could also be because movies like this remind us of who we can become if we are not stunted by circumstances and our environment.

For long, the movie lived rent-free in my head and when, one day, I was walking in the streets of Twitter and saw a tweet Tunde made about teaching chess in slums, I knew I had to have a conversation with him.

Like Robert Katende in Queen of Katwe, chess, for Tunde, was beyond a game of moving black or white pieces – chess saved him.

Tunde grew up in the Isale Odo community in Ikorodu, and like many kids living in slums, he didn’t have access to a lot of things. By the time he finished his primary school, his family was too poor to send him to a secondary school, so he stayed at home for 2 years while his mum worked as a cleaner at Yintab College in Agric, Ikorodu, to save up some money for his education.

During that period, he learned to play chess at a barber’s shop. He would later be ranked as the number 13 chess player in Nigeria. 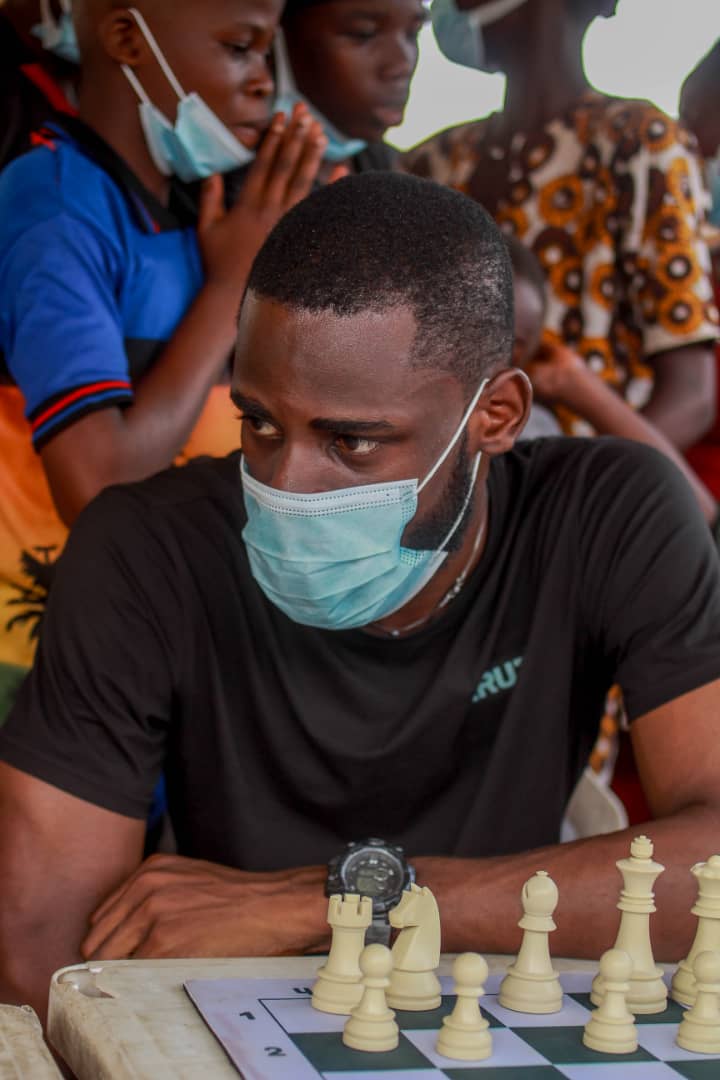 Fast forward to 2015, Tunde is now a graduate and the big question comes: what do I do with my life? There was nothing concrete – a few piano plays in church, and private chess lessons here and there. Tunde had hoped that he would be able to teach chess in schools, and introduce chess into schools’ curriculum, but it was not to be.

One day, he went to visit someone in the Majidun community and saw a lot of children in slums, many of whom were not attending schools. Chess had given Tunde a lot of life-changing opportunities, and he wanted to do the same for these children he saw in Majidun. “I wanted to give them something to be hopeful about,” he says. Dusk and dawn, he dreamt about these children and what chess could do for them, “I became obsessed with the thought. I would Google silly things like ‘how chess can change life’, and watch Queen of Katwe over and over again.” 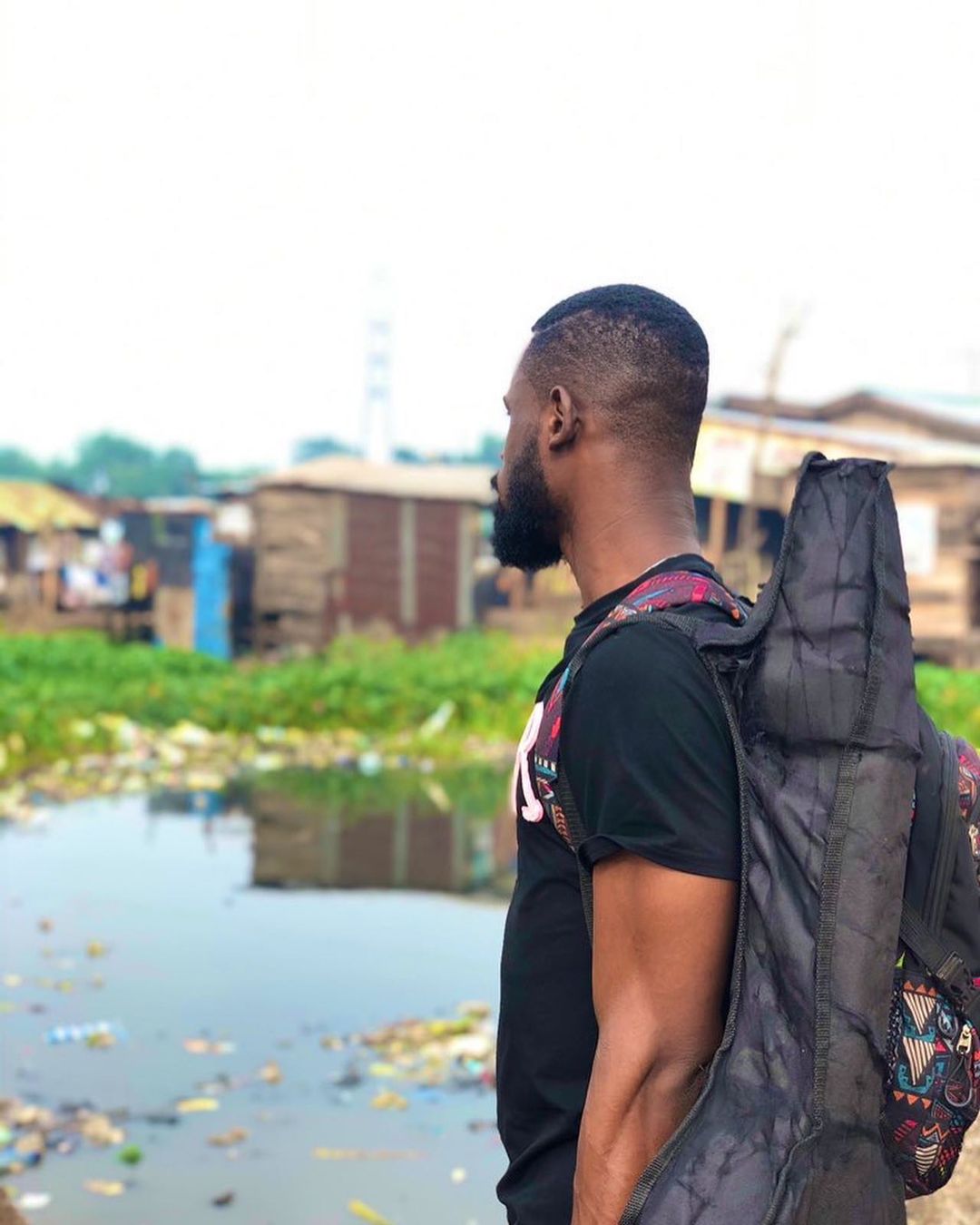 He called his friends and went to Majidun with them. They gathered about five kids and taught them how to play chess. 5 became 10, 20, 35 – and then about a hundred.

That was his turning point.

The children’s reception to the game of chess, the avidity with which they moved each piece – even when they weren’t sure if their moves were right or wrong, and the vociferousness of Basirat who held on tightly to his trouser, begging him to give her a chess piece, bore a lot of significance for him. Basirat was 5 years of age at that time and when he randomly shared her story on Facebook, people donated for her, and someone promised to sponsor her education to the university level. Basirat would later become the poster child for ChessinSlums.

Tunde knew he had found his calling, and his path was clear: find more children like Basirat. 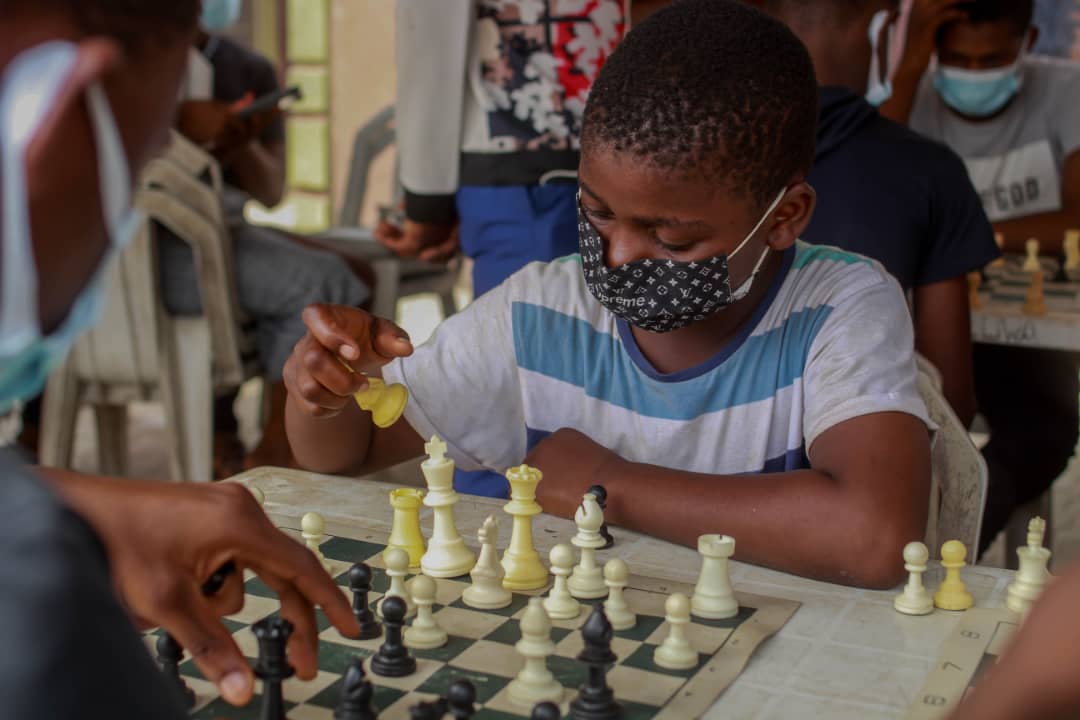 He then went to meet the Baale of the community with a proposal to teach the kids on weekends. He would teach them chess, mathematics, vocabulary, and have pep talks with them.

On the 1st of September, 2018, ChessinSlumsAfrica was (officially) born.

Chess teaches children to think for themselves. It educates their minds and inspires the love of learning in them. ChessinSlums uses the game of chess as a medium to give educational opportunities to children who have no access to education or are too poor to get one. This NGO would become a revolution that could solve the education crisis and literacy problem in the country and beyond.

So far, Tunde and his team have done well. There are over 200 kids who are being taught how to play chess and about 20 children on full scholarship in and out of the country – one of them is Odunayo Williams, national under 10 female chess champion in Nigeria. Tunde says of the children, “They have incredible potential to do more but life had chosen a different path for them.”

The Majidun community is like many not-too-privileged communities we see in Lagos: bumpy untarred roads, face-me-I-face-you homes, heaps of dirt here and there, poor drainage system and many little ponds of stagnant greenish water.

A few days after I had a conversation with Tunde Onakoya on Zoom, I alighted from the bike at the Baale’s house at Oja-Ale, Majidun in Ikorodu to be a part of a chess tournament Tunde had graciously invited me to.  Not too far from where my bikeman stopped, the excited squeals of children welcomed me. There were a few long tables with chess boards on them, and two categories – junior and senior – of players. Some children seated around these tables moving chess pieces about while others stood close, cheering their friends on. 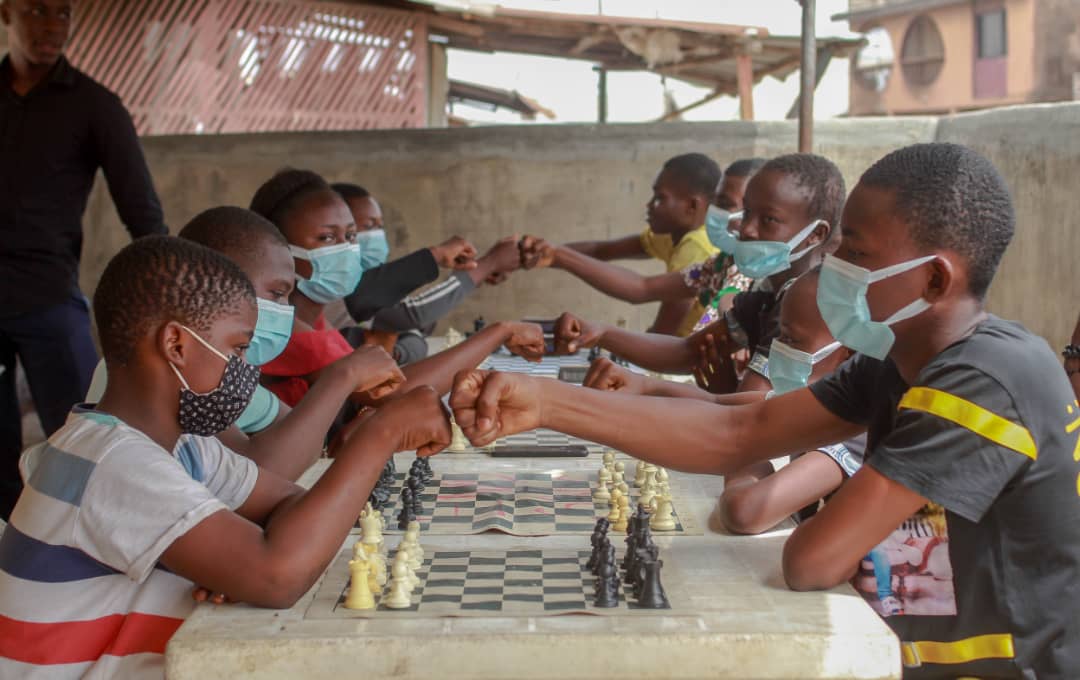 I spotted Tunde immediately in a black shirt, a hat on his head, a piece of paper in hand, moving about, checking what the kids were playing and writing down the names of winners. The winners were given cash prizes and the overall winner went home with 10,000 naira. After the tournament, each child was given a bottle of soda and a snack.

“It costs money to do these things.” Dusk was setting in and Shadrack who lives in the Oja-Ale community in Majidun and is a (very friendly) volunteer tour-guide for ChessinSlums was taking us to Basirat’s house and, at the same time, showing us around the community.  I agreed with him. The children’s shrieks of joy do not just come from moving chess pieces; many work hard because there are cash prizes attached to winning. I also noticed the way their eyes lit up when they got their snacks.

You cannot teach a hungry child chess, nor can you teach a homeless one. 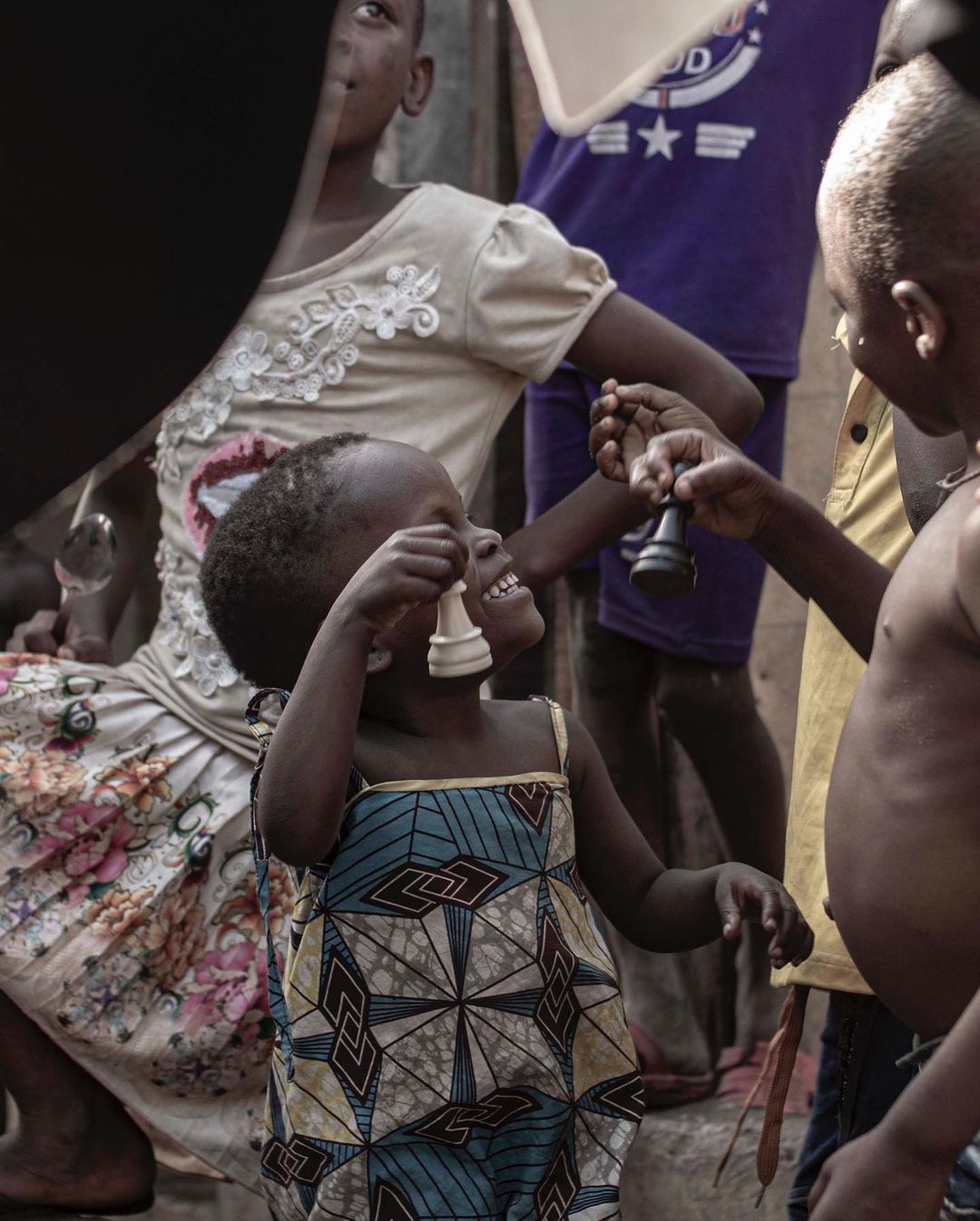 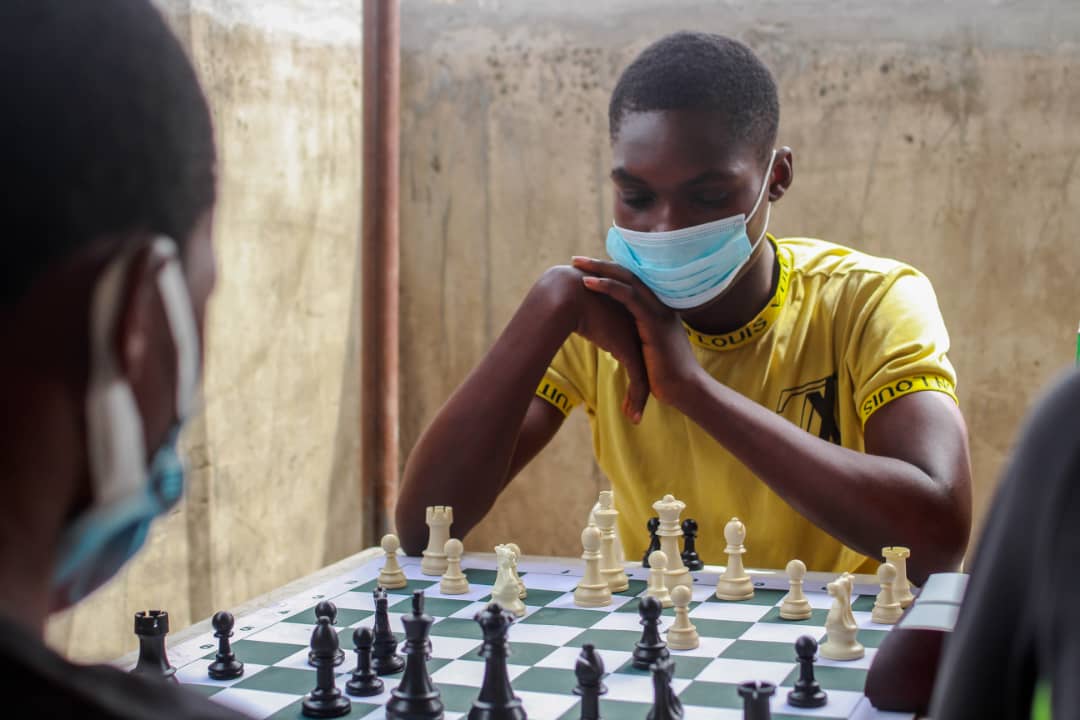 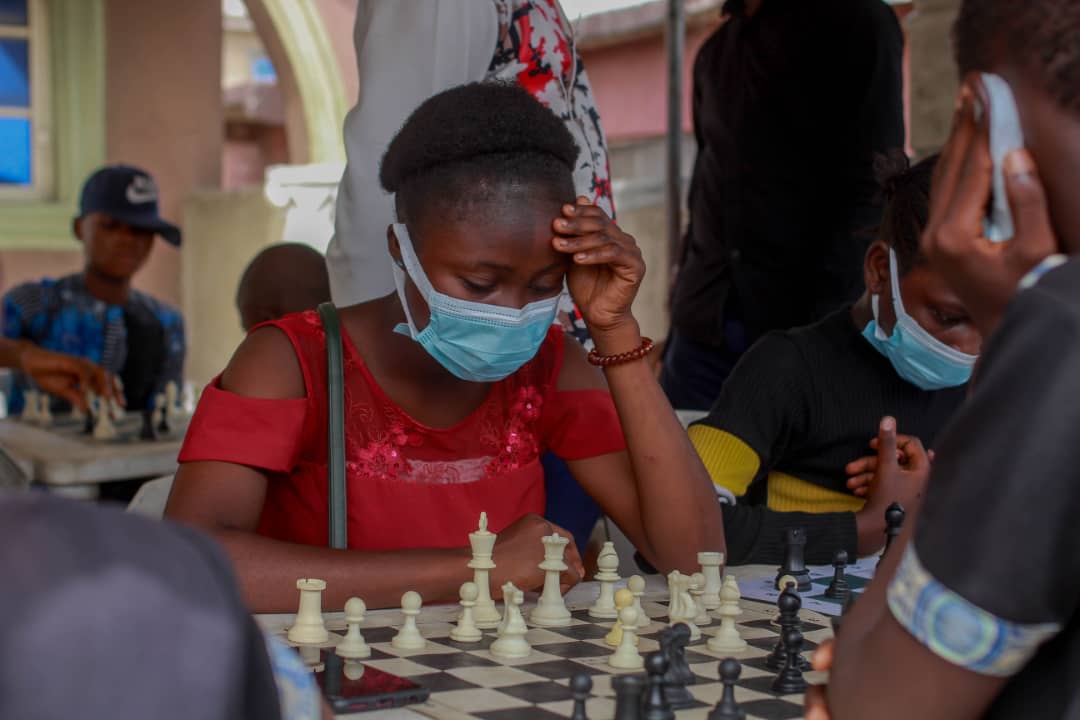 In the community is a lagoon. At its bank are little wooden “toilets” raised high above water level. The community members enter the “toilets” and defecate into the lagoon and the water carries the excretion away. “Breeze blows into your anus as you excrete, it’s the best feeling,” Shadrack joked.

As we walked to Basirat’s house, Shadrack pointed to a little shack at the shore of the sea where one of the ChessinSlums “children” used to live. The tiny shack was already in ruins; it was filled with dirt, little broken furniture and used items. “This is where they used to stay, before Tunde got them an apartment,” Shadrack says.

Being the founder of ChessinSlums also means one thing: you spend a lot. Tunde doesn’t only feed these kids, he also changes the economic status of their families by getting apartments and furnishing them for those who are homeless, and education for those who do not go to school. He also told me he plans to adopt two of the ChessinSlum children who lost their mother to HIV.

How does he get the fund? “When I started, I used to reach out to people I know for help, I teach chess privately to make money, so I beg the parents of my students to help out in any way they can,” he says. Now, it gets better; the more Tunde shares the stories of these kids on social media the more people are willing to donate and help in any way they can. Now, Tunde has a gofundme page where you can donate to help ChessinSlums kids. He also got global recognition when the kids from ChessinSlums drew a tie in a virtual match against students of the University of California. During the pandemic, ChessinSlums also partnered with Chesskids to provide digital learning resources (iPads) for the kids. Private individuals also provide scholarships to ChessinSlum children and this, to an extent, takes care of their education.

Today, ChessinSlums is beyond Majidun, it has extended to Mafoluku community in Oshodi and in Makoko where a child, Ferdinand, with Cerebral Palsy won a chess tournament. Tunde Onakoya is changing the lives of children, one chess piece at a time 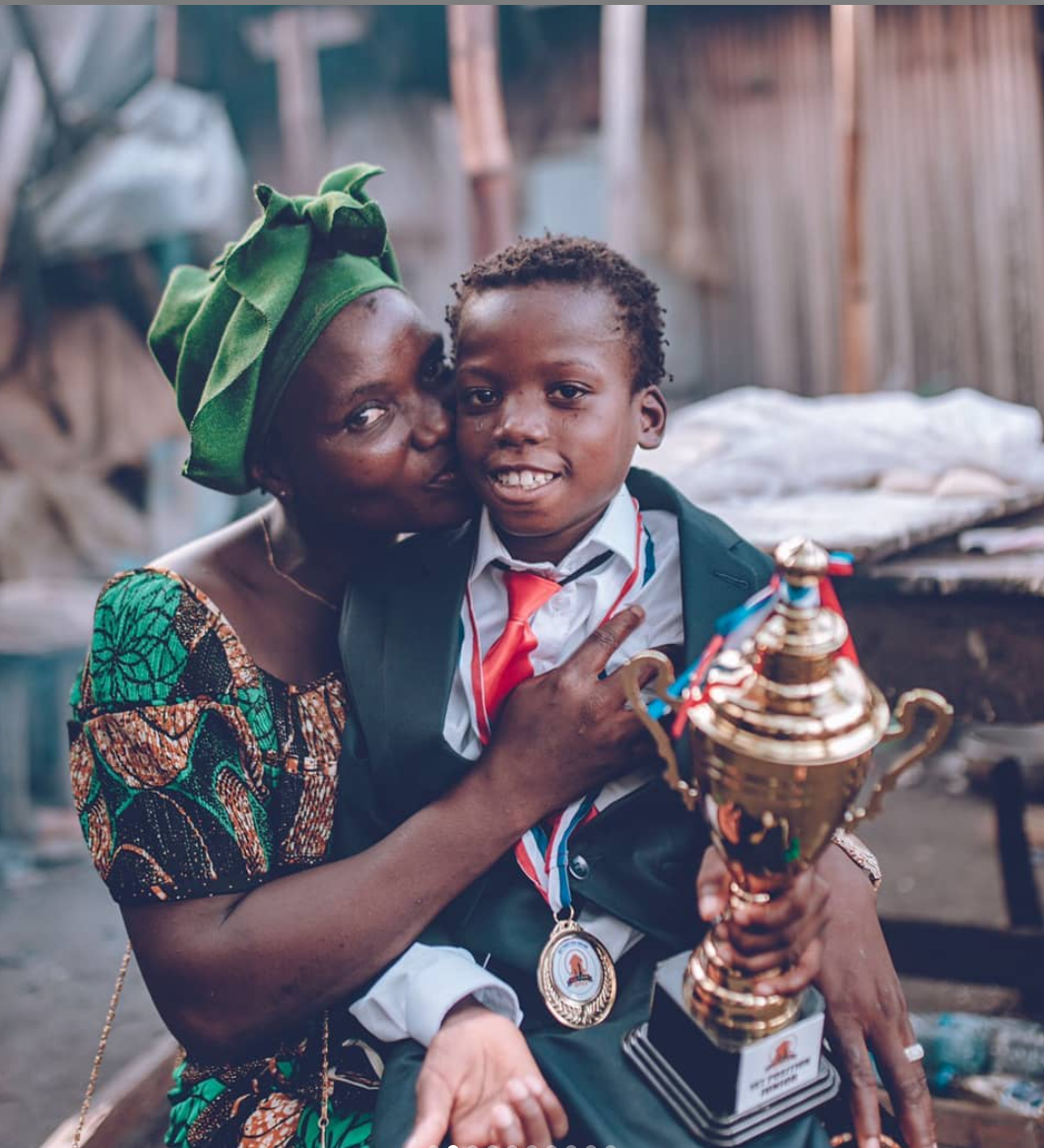 Tunde’s goal is to extend this to as many slums as he can reach, and provide innovative solutions using chess, but beyond that, he has seen the lives of these children change, and he is proud of how far they have come. For him, there’s no turning back.

Mfonobong Inyang: Life is a Moving Train; You Need a Coach to Guide You

Editor at BellaNaija Features. And writing beautiful stories of places, things, and people like you. Reach out to me, I don't bite: [email protected] | Instagram @oluwadunsin___ | Twitter @duunsin.