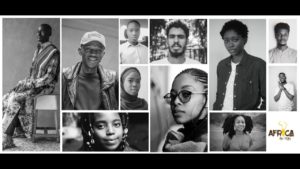 The Africa No Filter’s Emerging Artists Fellows program, which allows future and mid-career artists to collaborate on career-defining projects, has unveiled the names of 11 emerging artists who will be participating in the life-changing program. The Emerging Artists Fellows program is part of Africa No Filter’s mission of supporting storytellers in Africa and the diaspora whose work shifts stereotypical narratives of the continent.

The artists will get funding to help develop and produce their projects. There’s also ongoing mentorship and opportunities for networking and collaborations.

“Creativity and art, in general, are powerful tools in creating and presenting relevant narratives about the African continent,” says Moky Makura, Executive Director at Africa No Filter. “We created the Emerging Artists Fellows program to offer storytellers an opportunity to experiment with ideas and creative methodologies that they’ll be able to reuse for the rest of their careers. The program will offer them the time, space, and development needed to take their careers to the next level.

They’ll produce films, installations, paintings, a novel, a cookbook, multimedia essays, digital art, and even emojis. Their work will explore identity, spirituality, landscape, women in leadership, oral traditions, representation, food, and resilience. While the projects and artists are as diverse as Africa, they all have three things in common: innovation, creativity, and telling an alternative story of Africa.

“We also wanted highly motivated artists who are intentional about their art practice and put deliberate and consistent efforts towards creating,” said Essé Dabla-Attikpo, Program Facilitator.

The emerging artists fellows are:

1. O’Plérou Grebet, a 24-year-old Ivorian digital artist, graphic designer, and illustrator, is known for creating over 300 free emojis portraying African cultures. He is now working on Zouzoukwa, a multiplatform project that aims to create content centred on African emojis and build a collection of free cultural material.

2. Haneefah Adam, a self-taught Nigerian photographer and painter, is 30 years old and works with experimental food and digital art. She is working on a documentary that will be part of a multidisciplinary show that will include photography of Dada women, installation, and visual art paintings.

3. Mpho Ts’uene, a 27-year-old Lesotho visual artist, utilizes art to fight gender injustice and stereotypical African narratives. She is now working on a cookbook that will employ Basotho cuisine and food culture to add to the expanding body of work that connects with food in Africa beyond poverty.

4. Gambian creative consultant and multimedia artist Baingor Joiner, 28, is working on a historical book, a photo essay, and an interview video series on Thomas Joiner‘s life.

5. Stella Tchuisse, a 27-year-old Cameroonian actress and director, uses cinema to highlight important African stories for Africa and the rest of the world. ‘Elle Aussi, She Too,’ her project, uses the arts to encourage female political leadership in her country. She plans to create a picture series of renowned female politicians.

6. Prince Ardayfio, a 26-year-old Ghanaian filmmaker, works with both traditional film and virtual reality. He’s making a documentary to disprove the stereotype that black people can’t swim by highlighting African people’s cultural and historical relationship with water and bodies of water.

7. Progress Nyandoro is a 24-year-old Zimbabwean artist who specializes in multimedia art that uses paints and textures to explore society and social life in Zimbabwe. She is producing mixed media paintings for a series called ‘Rich, I am’. It will have a digital and physical exhibition.

9. Dylan Habil, 23, is an award-winning Kenyan filmmaker, producer and media strategist. He is developing an animated docu series called Mizizi, a contemporary take on African folktales.

11. Mahoutondji Kinmagbo, 21, is a self-taught visual artist from Benin. He’s producing a short animated film about a teenage girl passionate about living in a world where creativity is a way of life. The film will be made using 3D design software.

BNWeekInReview: Get the Scoop on Every Trending Story You Missed This Week