Nigerian Idol Season 7: Check Out the Performances of the Top 10 Contestants 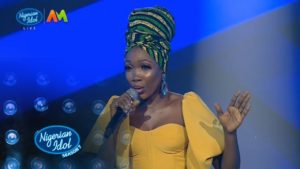 With the return of “Nigerian Idol“, the journey to stardom continues with a transition to Top 10 mode as two contestants, Joel and Precious, reach the finish line of the intense competition.

Watch the top 10 deliver amazing performances at the recent live show below:

David Operah performs the work of two Nigerian music icons; 9ice and 2baba. The track in question is “Street Credibility” which was released to critical acclaim in 2009.

Faith performs the evergreen hit “Always on My Mind” from Lagbaja’s 2005 album “Africano… the mother of groove.”

Abigail serves some hot vocals as she performs D’banj’s smash hit “Emergency” released in 2017 from the album “King Don Come“.

Progress brings the work of another Grammy award winner to life as he performs “Joy” a single by Wizkid released in 2014.

Gerald does an amazing job of singing the heartbreak single “Ifunanya” by P-Square. Released in 2007, it was part of P-Square’s hit album “Game Over“.

Itohan takes on this powerful song by Omawumi and adds her spin to it. The song was released in 2011 and was a part of Omawumi’s sophomore album; “Lasso of Truth“.

Zadok brings the Wizkid smash hit to life with his awesome performance of the 2013 smash hit “Back To The Matter”.

Jordan breathes life into Grammy award winner Burna Boy’s “Ye” which was released in the year 2018 from his 6th studio album “Outside.”