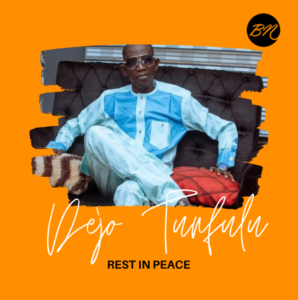 One of the most talented comic actors in the Yoruba Nollywood business has just passed away.

Kunle Adetokunbo, often known as Dejo Tunfulu, a veteran Yoruba actor, has died. After a short illness, the actor died in an undisclosed Lagos hospital. His colleagues confirmed his death, including the President of the Theatre Arts and Motion Pictures Practitioners Association of Nigeria (TAMPPAN), Bolaji Amusan.

He earned the moniker “Dejo Tunfulu” from his comedic performances in films, where he was often cast as a stammerer.

Check out these five short clips that remind us how funny he was:

Sound Sultan’s 9th Studio Project Is On the Way