#BNMeetTheStar: "Blood Sisters" Star Genoveva Umeh Is In Her Zone 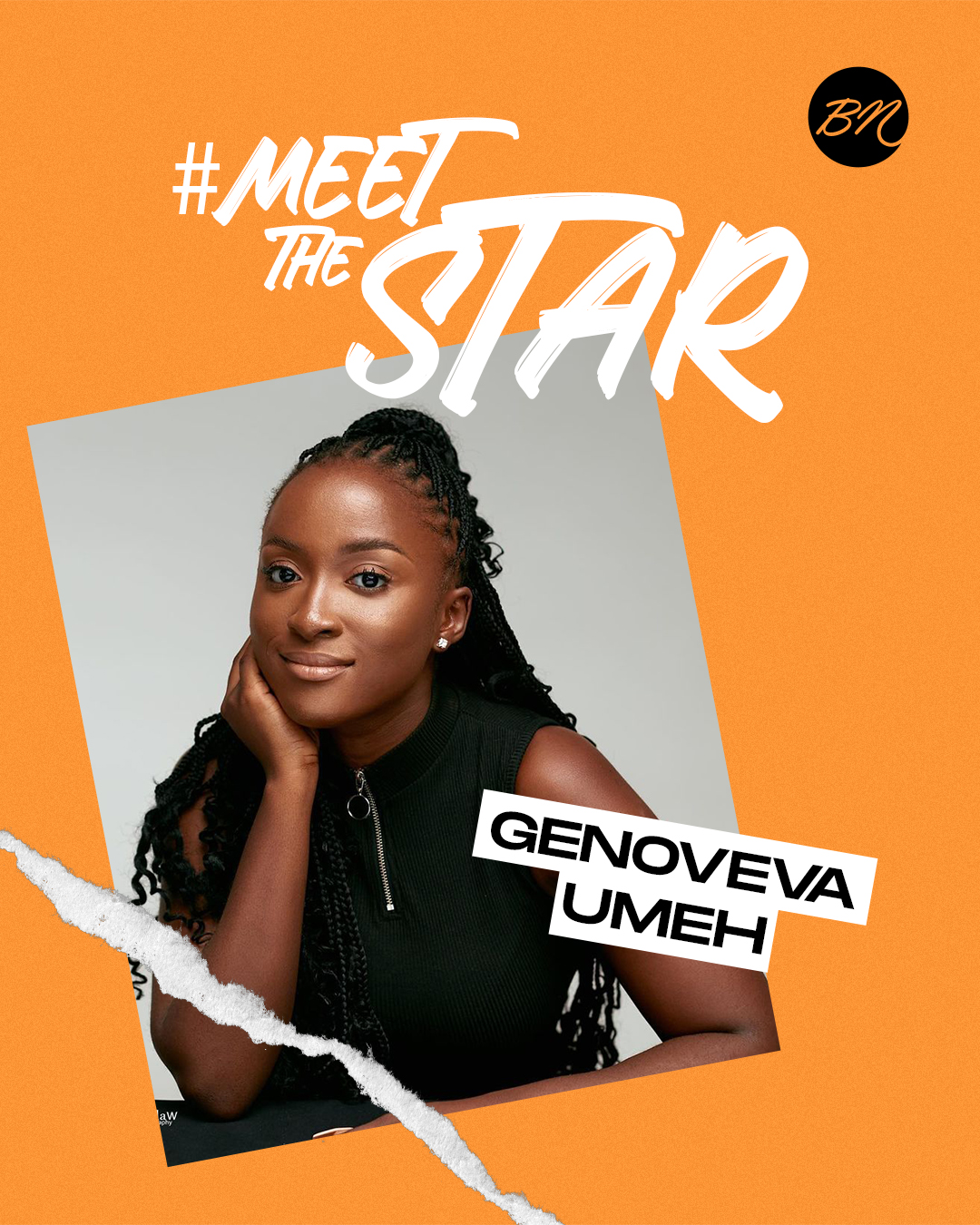 When I first met Genoveva Umeh on Zoom, she was calm and serene—exactly how you’d expect her to be.

She’s not a new kid in the Nollywood block. Genoveva who plays Timeyin in “Blood Sisters” has featured in several successful Nollywood films which you can watch on Netflix, Iroko TV, and YouTube.

In “Blameless,” Genoveva Umeh plays Ezinne. You will see her in “Love is War,” in the short film “Lizard” which won an award at BAFTA 2020, in “One Lagos Night,” in “Monitoring Spirits,” “Reflections,” and in “Focus.”

Her resume is incredible!

I had a quick chat with the stunning queen, and we had so much to talk about from, her hobbies as a child, to moving to the UK, to starring in the critically acclaimed limited series and what’s next for her.

Scroll down to read the interview.

I would describe myself as a fun-loving, ambitious, Nigerian-born British actor. I care about my family, I care about friends, I care about kindness, I’m really fun and I love to live my life.

What did you want to be when you were a kid?

I don’t know if I knew what I wanted to do. I knew I said I wanted to be a doctor, but that was because it was, back in the day, the most successful career path to follow. I knew that I was interested in dancing and creative activities. I participated in a lot of contemporary dances; the white gloves, everything. I was a huge fan of doing that outside of the church as well. I would do that at parties, junior school parties, and I’d like to win, be the best dancer. I honed those skills and I enjoyed them so much that I took them on into high school, where I discovered drama and it quickly became my favourite class to go to in the entire curriculum. Then I decided to go to the school of acting. It was nice. That’s kind of how I started my journey.

Were your parents strict?

My parents are strict, for sure, but they were quite encouraging. They were not strict to the point where I wasn’t allowed to express myself, or to the point where I had to suppress my creative side, because they are equally as creative, equally as funny, and a joy to be around. It was nice to have that energy growing up. They did support me, but I felt like as a first-generation immigrant coming into the UK, you know, not having to work hard to secure my passport. My parents did all the work. It felt like I would be letting them down if I turned around and said, “Oh, I wanted to act in university or anything.” So I studied law at university.

Any fun facts about you that people don’t know about?

I speak Jamaican Patois. Because I grew up in London, I have a British accent and speak Igbo as well.

You play Timeyin in the series. How did it feel to play that role? And could you relate to her in any way?

It felt amazing to play that role. To me, it’s just like a girl who just has a lot of love to give, but she’s looking for the right people to pour that love into. I could relate to her in that way. I’m such a big lover, and I just love to help my friends. I’m always so supportive of people, so I can relate to her in that way. Of course, I feel like her family was quite dysfunctional, which meant that she really couldn’t flourish or they didn’t believe in her, and that made her feel like she could find love in drugs and other things.

Within not less than 24 hours of the premiere, “Blood Sisters” trended on Netflix as number 1 in Nigeria, and your character was the talk of the town on the streets of Twitter. How have things been in the aftermath of the phenomenal success of ‘Blood Sister’? Getting new contracts, congratulatory messages, etc.

I think it’s been nice for people to have finally seen my work or at least recognise it. It was nice to have all the people in the industry that I’ve kind of watched their work or people that I’ve respected tell me, “Oh, you did an amazing job.” Or “Oh my God, how did you get there?” or ask questions about the character or how I worked with the character. Those are nice and heartwarming.

Also, the people that are absolutely in love with this character are telling me that they could relate to her in the fact that they’ve had to deal with dysfunctional families or deal with drug conditions. It’s so nice because that’s essentially the reason the character exists: to touch those people, and to tell them, “Hey, you’re not alone.” As I said, there are lots of people that are dealing with this same thing. I hope you’re staying strong. I hope you’re focusing on yourself because that’s what you need to do. Timehyin needed to take all that love and all that validation she was seeking from everybody else. She needed to pull that back into herself as well.

What is the funniest reaction to the series you’ve seen so far?

It’s been really interesting reading everybody’s reactions to the series. In the bathroom scene in rehab, people were like, “Oh, geez, were you butt naked?” And I’m like, “Guys, I wasn’t butt naked.” I had a body double. But, you know, we did that. And I’m glad that people enjoyed the scenes.

In the show, the relationship between Timeyin and Kola is so close that it almost seems like the perfect brother-sister relationship in some ways. What did it take for both of you to develop that chemistry?

Interestingly, I met Deyemi, possibly in 2015. I DM’d him in like 2015, and told him, “Oh, here’s my monologue if you could watch it or not.” And I remember he was going to Ghana, and he was like, “When I get back from Ghana, I’ll watch it,” and then he watched it, and he gave me his advice, and I was like, “Okay, thank you.” And then fast forward to maybe 2018, or 2019. We worked on this film called “Blameless” where he plays my father, and yes, it was nice. We already had this rapport. Being cast with him was familiar territory, so it was just easy. He’s a cool guy.

If he hadn’t died, I think it would have been the perfect brother-sister relationship.

Absolutely. It would have been nice. That’s why she was so heartbroken because she had lost her dad, who was kind of the love of her life, and now losing Kola was the last straw because I’m stuck with these people, you know?

What was it like to meet your co-stars for the first time? Are things different when the cameras are rolling compared to when they’re not?

You kind of book the role, and I was like, “Thank you, Jesus, that I have this role. I’m so excited to get my teeth in.” And then you walk into the table read and it’s like Gabriel Afolayan, Ramsey Nouah, and there’s Kate Henshaw. I was like, “Oh, my God.” I remember just nodding to Gabriel and saying, “I can’t believe I’m in this room.” He was like, “No, be Lekki-Epe, we just commot from.” It was so comforting to have that and to know that I would work closely with them. They were so amazing. and the way that they made me feel comfortable. They made me feel confident; I didn’t feel intimidated. I didn’t feel like I was in the wrong space. I felt like this was it. I’m supposed to be here. Like, God has ordained it, and this is what’s happening. and I’m so grateful for it.

Who are you close with now?

I don’t have a specific person in mind. I’m a huge fan of Nancy. I love Kate, and to have played mother-daughter so closely and have everybody say that we look alike is nice. Yeah, Kate Henshaw, possibly Nancy, and Gabriel Afolayan, because he’s on fire.

Will you be staying in Nigeria or going back to the UK?

I go where the work goes. That’s my idea, and Nollywood to the world, I believe.

Let’s project into the future. Where will the next 5 years find you?

Hopefully, doing the best work, representing my country in the best ways, maybe finding some really good peaceful moments for myself and kind of making sure that myself and my family are financially stable and that I’m earning royalties from this job. That would be so amazing. Win an Oscar. Yeah, those are the goals for now.

A piece of advice to the Timeyins around the world?

Stay strong. Just like me, she finally gets to listen to her voice, and that’s something that I think that we should all do. Listen to your voice and find validation for yourself. If family members are not helping you, seek professional help. And if you find that you’re struggling, try and speak to somebody that can help you. I love you, and please take care of yourself because we need you. The world needs you.

What would be a good theme song for your life?

The theme song for my life right now would be “You Covered Me,” by Dr. Vernon. The song is about just having patience and going through all the things that you go through. God is there. God is there to support you. And you just have to give all the glory and all the honour to him at the end of the day.

I’ll be working on a couple of projects towards the end of the year. One is international, so I get to travel and work. I’m looking forward to the next couple of months and years of exposure.

Kiki Omeili is Celebrating her Birthday + Launch of her Travel Vlog Today!

Simi On What it’s Like Working with P.Prime, Pheelz, Ozedikus for her Album “To Be Honest” | WATCH