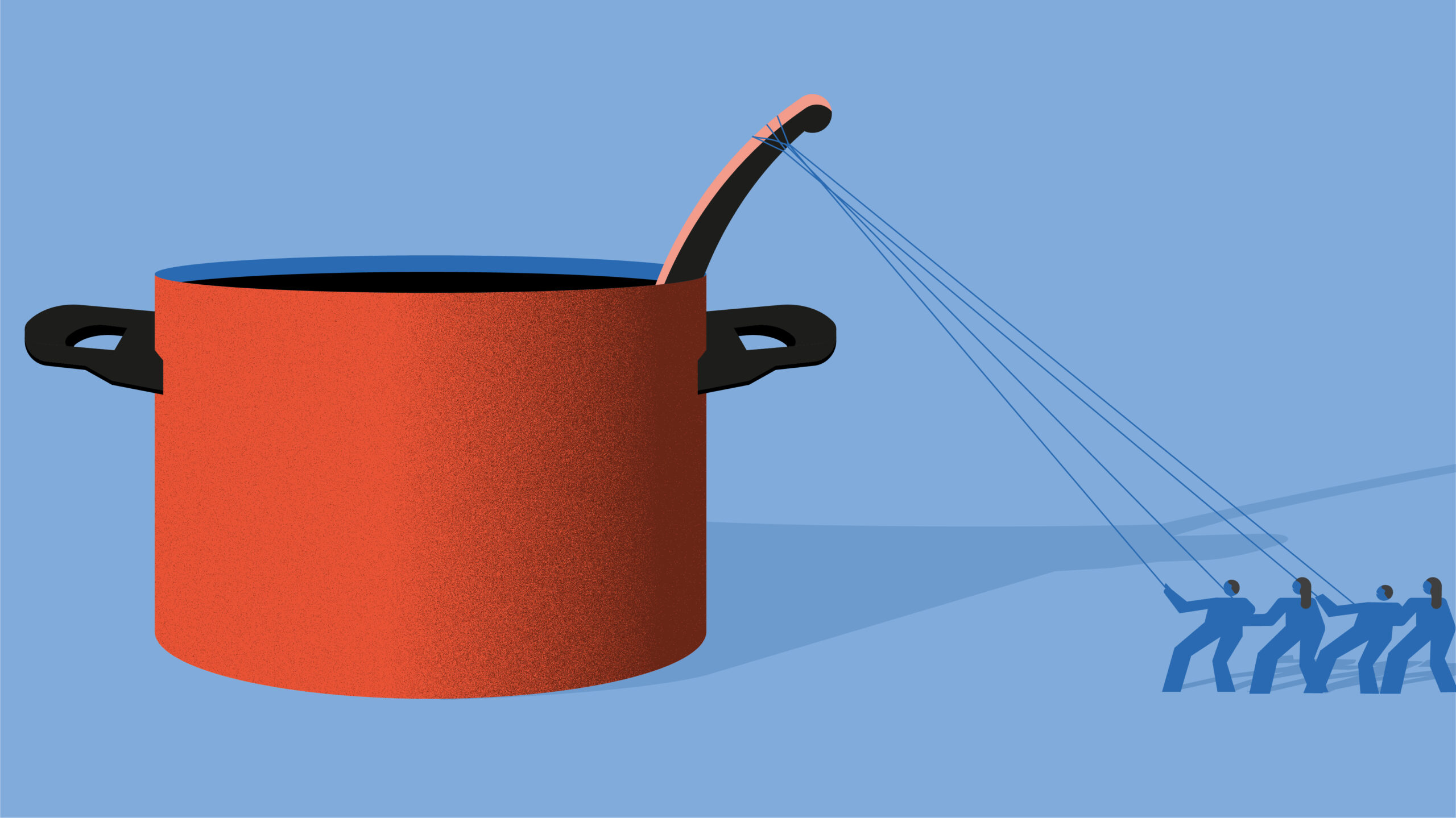 Every Eke market day, Twitter NG argues about who should cook and clean in a relationship, and how it is the duty of the woman. Recently, the conversations moved beyond who should do these tasks and why to when they should be done.

A Twitter user advised men to pay attention to the kind of woman they are in relationships with; she won’t make a good wife if she comes visiting and sleeps beyond 8 am. It’s simple: a good woman wakes up a 3 am, cleans the entire house, cooks the meals for her husband and kids, does laundry, prepares the children for school, prepares her husband for work and then prepares herself for work too. A woman who cannot match up to this is lazy, and a girlfriend who sleeps past 8 am while visiting you is a potential lazy wife. You have a problem on your hands.

When I see tweets like this, I simply want to roll my eyes, hiss and walk away. That was what I planned to do, but see me now, writing this. I’m not one to really involve myself in conversations like this, at least not anymore. Before, I’d have grabbed my phone, eager to explain to people why conversations about cooking and cleaning are not simply about the acts, but about the thought processes and beliefs that steer them. Why women are more than their abilities to cook. Why the world has gone past this. Why we should be more progressive in our thinking, and why these conversations we’re having online affect women in real-time. But remember what I said about living a life free of gbas-gbos?

I’m writing this for 2 reasons. One is that very recently, my 13-year-old cousin, who now lives with us, joined me in the kitchen while I was air-frying fish one evening to continue a conversation he had with my sister some days back.

Him: D, A said it is not only a woman’s duty to cook for the family.

Him: Then whose duty is it?

Me: Both the husband and the wife.

Him: But why will I be the one to cook? Why will I have a wife and still be cooking? After all, I paid her bride price.

For a moment, I was taken aback. He was curious to learn, but there was a loftiness I didn’t miss in his voice: his belief that as long as he paid a woman’s bride price, he was entitled to her labour. For his age, my cousin cooks his meals quite well, so he has no problem with cooking, he has a problem with cooking when a woman is there, especially one whose bride price he paid. This is the 2nd time I would be stunned while having a conversation with him. The first was when he told me he didn’t believe a woman should study past primary 6. Why? “Shebi she will get married and take care of the home. There’s no need for her to go to school, her husband will maintain her.” Again, you cannot miss the condescension with which, at his age, he already addresses women.

My cousin is a teenager who will learn and grow with time, but people who start conversations like this on Twitter are not teenagers, they are fully grown and bearded, and one cannot help but expect better. Don’t raise your hopes. 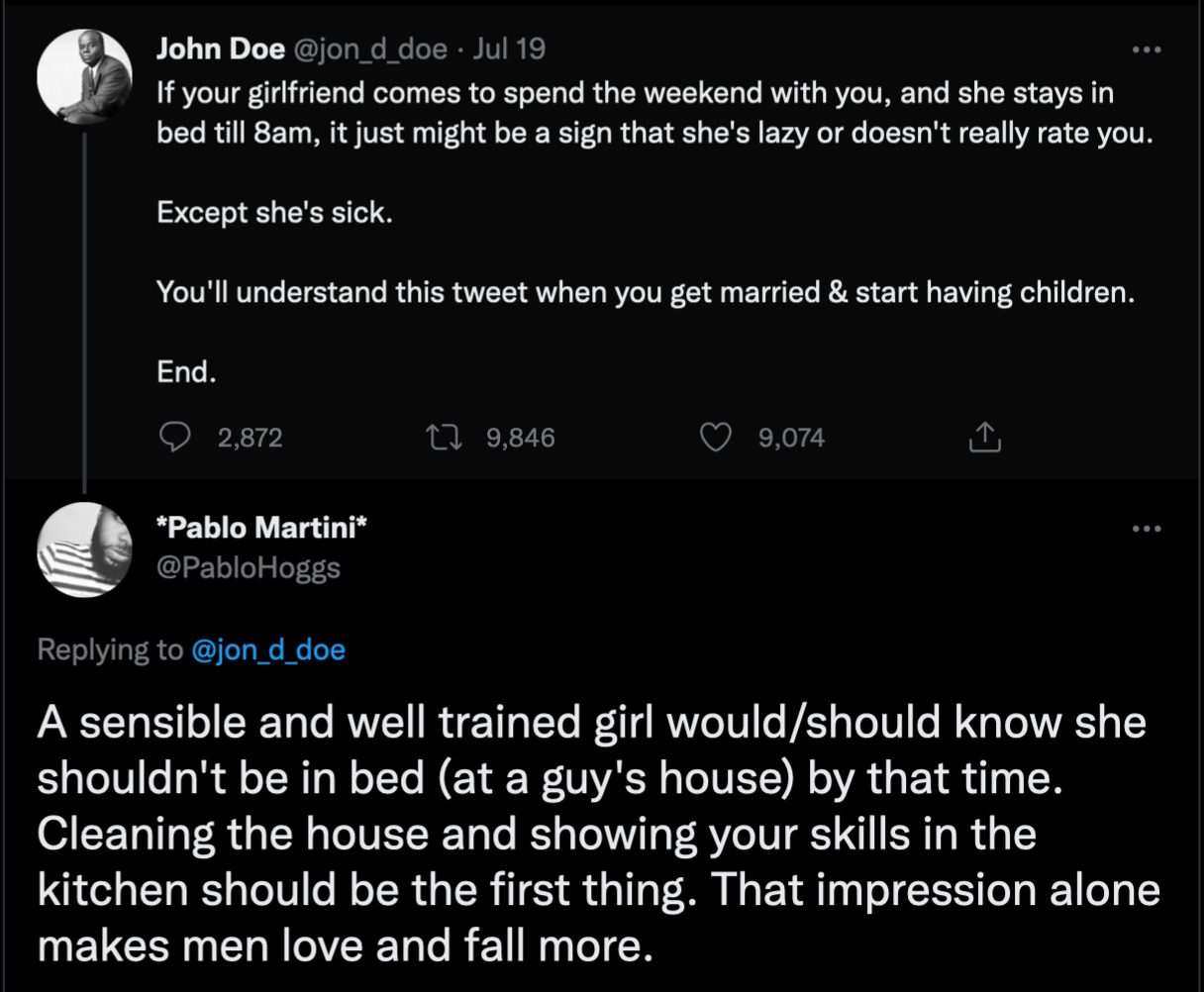 Two is that, no matter how we try to pretend it isn’t true, online conversations like this help sway people’s perspectives and form thought processes. They transcend online and affect women in real-time. Someone somewhere is probably inviting his girlfriend over just to see if she’d wake up at 8:05 am, and perhaps welcome her with blows if she does. So why would I, as a woman, not speak against a system or belief that is not in my favour, and may potentially harm me?

When we talk about cooking and cleaning, we make it about rice and beans, but it goes way beyond: it is mostly about control, dominance and subservience. A quick Google search shows how men have assaulted women because of food. In 2021, a report written by Derek Achong for CNC tells of a 43-year-old man who beat his wife and doused her in gasoline after she did not cook him dinner. A 2016 statistic by the World Bank showed that 51%  of African women report that being beaten by their husbands is justified if they either go out without permission, neglect the children, argue back, refuse to have sex, or burn the food. In 2018, Guardian reported the story of 33-year-old Sokari West who was stabbed to death by her husband for allegedly refusing to cook, in Rivers State. Veteran actor, Pete Edochie, reportedly said that “women who can’t cook aren’t supposed to call themselves women.” So what does that make them? Half-breeds?

Conversations like this effectuate the idea that no matter what a woman does or who she is, she can never be good enough unless she cleans and cooks. It is the reduction of women to mops and pots because “wife material”. It is the haughtiness with which these issues are being talked about and addressed. It is in the language and words used, and the way they are being used. It is in the demeaning, suffer-head tests mothers-in-law give wives-to-be when they come visiting – suddenly, they start sweeping, washing, or cooking to see if the lady would take over. Once she looks away, ahhh! she would make a terrible wife. Tell these same men to come clean or cook in your own home and they would feel insulted. Let a mother/father-in-law see their son cleaning and cooking in his own home and they’ll assume he has eaten the proverbial vegetable. For most men, these domestic acts are seen to be debasing, so they’re reserved for the lesser person in the marriage: the wife.

To reduce these conversations to rice and beans or dismiss them as nugatory is to be willfully ignorant and sly, especially when you consider that a lot of women do not mind cooking or cleaning for their families. It is society’s obsession with trying to put women “in their place” or invariably tell them who they should be and what they should do, not for themselves but to attract, please or keep men, that sucks. And the inability of men to stop being entitled to women’s bodies and unpaid labour.

Another thing we need to talk about is how we do not talk about men doing domestic chores as much as we talk about women contributing financially to the home. But that’s a topic for another day. So I’ll leave you with this Instagram post from Laetitia.

Although feminism is a necessity, there is an extreme pressure it puts on modern African women.
We are in a kind of “in between” society where we have not yet finished deconstructing the stereotypes associated to the “good African woman” who is submissive and take care of the home but where we have well accepted that “the independent woman” who earns a good living is that respectable new woman.

Most men here now have accepted that a woman who asks her boyfriend for money is incapable. They love to say that She should go ask her father for some money. But if that same woman visits her in-laws and doesn’t do the dishes at their house, she’s not good enough.

If she asks her boyfriend money for some needs, she is lazy and materialistic but it is normal for her to make food for her boyfriend who lives alone and who does not know how to cook.

Women are told that the new norm is to have at least one income-generating activity (while forgetting wage inequalities, discrimination in hiring, the difficulty of access for women to very well paid positions) , but the old norms that want her to be the one who watches over baby every night, who ensures the proper functioning of the home, are still there. The mental burden within the family still weighs on her. We have to become super humans capable of managing everything perfectly. Professional life and family life.

We must be independent women while knowing our “women’s place”. Double burden.

Although my personal wish is to see every woman financially independent, because I think that protects us from a lot of things, in the end, everyone is free to choose the type of life they want. I just wish that everyone is able to find a partner who assumes their ideology until the end. You want me to submit to you, and be the perfect traditional African woman, then accept the obligations that come with being the head of the family. Don’t call me lazy when I ask for pocket money.

You want a woman who works and can pay rent with you? Agree to manage the household and the children with her with the same involvement.