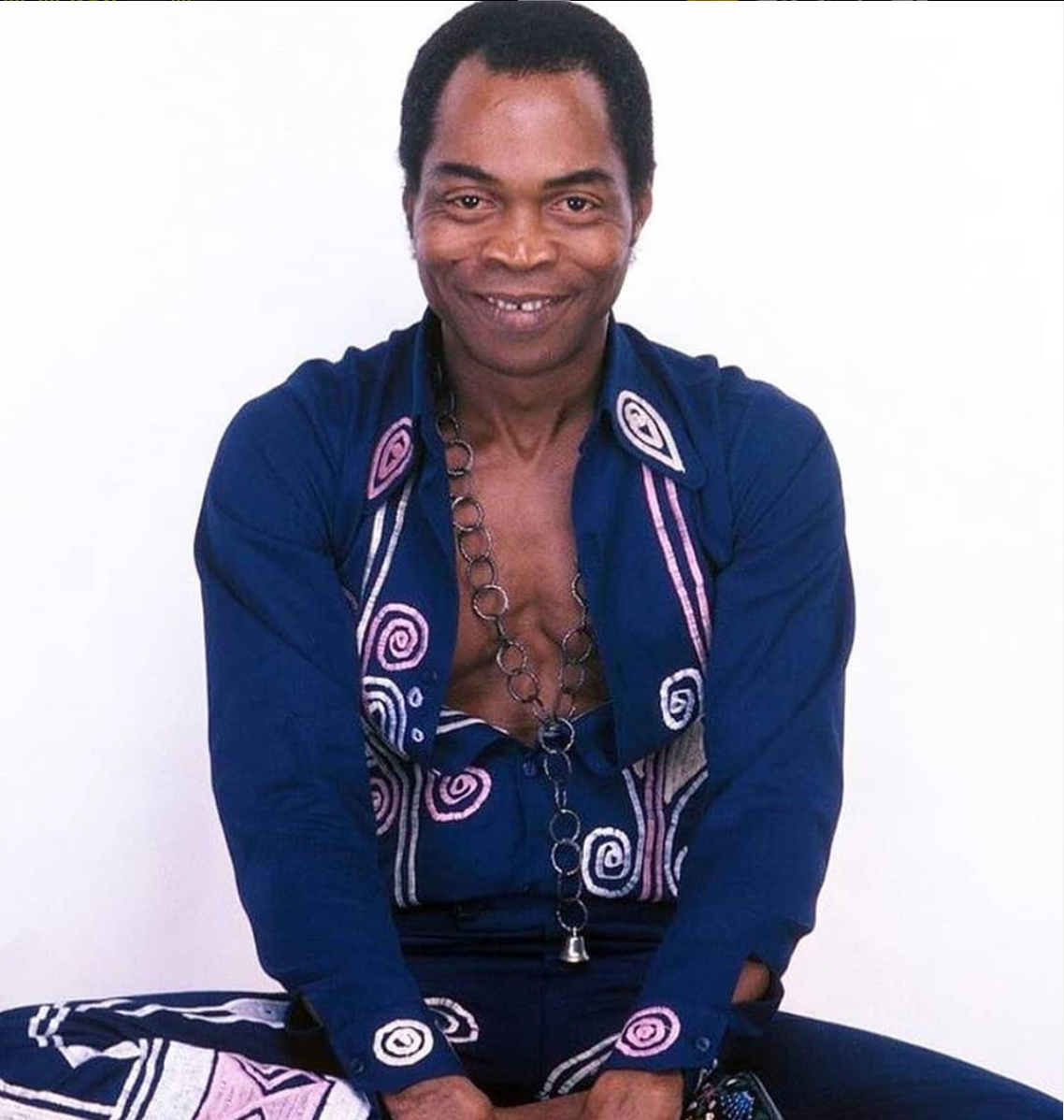 Last year, I wrote about Fela Anikulapo Kuti, describing him as the original “coconut head”, not just because he once released music under the imprint fortuitously named Coconut Records but more because he was one of our earliest references for an embodiment of counter-culture. When lies have been around for a very long time, truth is seen as an act of rebellion. Indeed we have found ourselves at a point in time where intelligent people are being hushed so that doltish folks won’t be offended.

We tend to love dead heroes. We disapprove of them in their lifetimes but build cenotaphs when they are cold in the ground. Today, the consensus is that Fela was a man who saw ahead of his time by the same people who pronounced an anathema on him back in the day. So we’ve to be grateful that his discography is well-documented because he spoke with utmost precision about the same challenges we are still facing today. It suggests that our solution isn’t just a change of personnel but a complete overhauling of the system. It’s the underground spiritual game; so let’s start what we have come into the room to do.

“People no go vote, dem come get big big numbers. Thousands to thousands, millions to billions. Which kind election be dis? Baba la nonsense!” In Teacher Don’t Teach Me Nonsense, Fela takes a swipe at many societal ills, chiefly how custodians of culture have habitually misinformed their adherents whilst the election rigging machinery of the political class gets a dishonourable mention. He unmistakably highlights the “problems of inflation, problems of corruption, of mismanagement, stealing by the government” as the bane of development in Africa. He perfectly understood the playbook of how exogenous actors collaborate with their local co-conspirators to deliberately under-develop the continent for their selfish interests.

“Every day my people dey inside bus. Forty-nine sitting, ninety-nine standing. Dem go pack themselves in like sardine. Dem dey faint, dem dey wake like cock. Dem go reach house, water no dey. Dem go reach bed, power no dey. Dem go reach road, go-slow go come.” Most Nigerians seem to have accepted their destinies as that of sufferheads. The glee with which we compare one level of dysfunction with another says it all. Unfortunately, this ability to contort isn’t a virtue, it’s a vice because our leaders are comfortable knowing that some citizens will make excuses for them. Somebody who can barely afford three healthy square meals will buy data just to defend the people that are significantly responsible for his or her penury. E be things.

“Armed robber him need gun. Authority man him need pen. Authority man in charge of money. Him no need gun, him need pen. Pen get power, gun no get. If gun steal eighty thousand naira. Pen go steal two billion naira.” Fela describes two dimensions of robbery, a person that steals from individuals and another person that steals from communities. This one na government magic; it’s reminiscent of the many manifestations of corruption by public officials which include but are not limited to: inflated contracts, unremitted revenues, grand extortion, appropriation of public properties to private uses, misuse of security votes, criminal wastefulness of common patrimony and influence peddling.

“Everybody run, run, run. Everybody scatter scatter. Some people lost some bread. Someone nearly die. Someone just die.” Fela in very graphic terms describes the chaos that most people experience when interacting with law enforcement officers who are ironically funded by taxpayers’ monies and have supposedly sworn to serve and protect the people. He describes this painful paradox as an unfortunate signature; “dem regular trademark” – suggesting that the carnage left in their wake is more of the rule than the exception. Since 1977 when he released this song, the coconut head generation is still in the crucible of this advocacy. To think that the biggest protest in the country’s history was largely driven by this particular menace shows how far back the fons et origo of this rot goes.

“My friend wan come buy fan. Him dey sweat for him dey sleep for room. Him dey fall level of tree. The fan na seventy-five naira. My friend him dey follow salary. Him dey try to save and save and save. Every time he nearly buy the fan, government go add ten naira more. Every time he nearly buy the fan, government go start one activity. Till the fan reach two hundred naira. My friend nearly die, he never die.” I am both an economist and a storyteller, yet few teach inflation better than Baba 70. People are struggling to afford the same basket of goods and services they did in previous years whilst their incomes haven’t significantly changed. It’s particularly poignant when public policies produce poverty and not necessarily the lack of productivity.

“That means to say you no dey Nigeria be that. You see yourself you no dey for Afrika at all. If you dey for Africa where we dey. You go know (I go know wetin). Plenty, about water, light, food, house.” Fela annotates Maslow’s submission about most people living at the base of the metaphorical pyramid. Till date, the average Nigerian (forget what you see on Instagram) struggles to provide food for the family, rents are ridiculous, electricity is epileptic and public water is anything but potable. He decries how Africans have been accustomed to living under very pathetic conditions which makes multilateral organizations seemingly justified in their calling us third-world countries.

“One man wey I know, him be lawyer. Him go buy the thing for him work. Him go buy the thing dem call spanner. Wetin lawyer go take spanner do. E no go reach where him dey go.” Using the anecdotes of professionals acquiring the wrong tools to do their work, Fela makes a point about the mismatch or social disconnect between those at the top of the socio-economic and political ladders and those at the bottom. He makes several veiled references about the dangers of abandoning underserved communities. This ‘blindness’ to the plight of the pauperized persons usually comes at great social costs when the rubber eventually hits the road.

“I say you fit never release yourself. Colo-mentality; he be say you be colonial man. You don be slave man before. Dem don release you now but you never release yourself.” Fela had been a rebel from the jump, he even changed his name from ‘Ransome’ to Anikulapo to align with his ancestral leanings. In this song, Fela seemingly mocks those who think that being associated with the ideals of foreign nations makes them superior to their counterparts who are local. He educates the listeners on how we have been systematically taught to hate our own culture when in fact, local doesn’t in any way mean inferior – what we call “foreign” is effectively other people’s “local”. He bemoans mental slavery; how many people are unwilling to leave the ‘plantations’.

We must learn to celebrate our own because this obsession with external validation usually comes at a price of cultural appropriation. In an epoch of ridiculously whitewashed pseudo-protagonists, we must honour a real one. First is the storytelling; preserving his legacy so that the next generation can come correct about the labour of a true hero’s past. There should be more well-curated biopics, musicals, and even post-humous albums. Second, we should stop the utter disrespect of comparing Fela with any of our faves – that right there is a violation. Senior man was in a class all by himself; so make you mind as you dey talk o. That he came in an era where the socials weren’t popping as they are right now doesn’t in any way reduce his greatness, if anything it further validated his ability to reach such wide audiences with the tech of his day – godfather doings! Third and very importantly; we should put some serious respect on Fela’s estate – his grandchildren should be eating good just because of the work their patriarch put in. It’s sad how we know to pay oyinbo royalties and negotiate split sheets but play the unlooking game when using Fela’s intellectual properties – comrades, no be so dem dey do things.