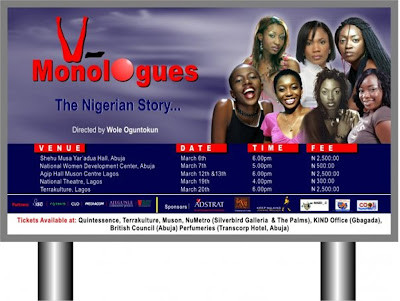 The Vagina Monologues have been running in Nigeria for some years now.
This year, organisers are saying that it has got a Nigerian identity because they are using real stories submitted by everyday Nigerian women.
There have been 3 shows already this month in Abuja and Lagos but you still have the chance to catch 3 more.
The play includes stellar cast like Kate Henshaw, Funmi Iyanda, Stella Damasus, Yinka Davies, Bimbo Akintola, Omonor Imobhio, Ashinoye and Tunde Aladese. Directing is acclaimed writer and Director Wole Oguntokun (Laspapi)

V-MONOLOGUES REVIEW by Uzo
The V Monologues: The Nigerian Experience i had been waiting to see since last year when i heard that it was going to be Nigerianized and would have a male director. I saw Eve Ensler’s version in New York a few years ago and found it unlike anything i had ever seen before. I didnt see last year’s production though i heard from friends that Joke Silva did a marvellous job and it was very similar to the original.

So on Tuesday, I was at Muson Center with my friends – Daddy’s Girl, Ms Travis and her daughter.

I loved it. I cried and i laughed. The actresses were truly amazing. Some more amazing than others: Omonor (what a talent), Kate Henshaw (not much of a stretch from what i have seen her in but strong none the less), Bimbo Akintola (always delivers), Ashinoye (a revelation indeed, this child can act), the ladies from Renegade Theatre – Kemi and Jennifer (always fantastic), Yinka Davies (delivered one of the most intense scenes i have ever seen) and Tunde Aladese (not as strong as the others and her dimunitive frame and voice was almost lost several times but she delivered)…

The Monologues were very relatable. Every monologue struck a cord in me. Some were personal experiences that had me sobbing really hard and Ms Travis who sat on one side of me held my hand wordlessly. Some of the scenes were hilarious..The Monologues touched on everything from child abuse, to widowhood, to physical abuse to masturbation. The scenes represented the rural and urban. In a particular scene about a very very well off woman being abused, i looked around the hall and thought to myself: a lot of these Prada carrying, $1500 weave wearing women are going through this right now…..

What i especially loved about it was the fact that Vagina was used quite a few times, song and dance was used appropriately and the pace of the show was perfect. The first part of the show – so heavy, i was ready to slit my wrists because i was so sad and depressed. Daddy’s Girl said she was just ready to go home and cry her eyes out…just when i thought i couldnt take it anymore, the tone lightened. The issues were still serious but the tone lifted a bit.

Like all things though, not all perfection. I would have preferred that the male voice over not be used. Would have prefered a female voice over. I think that in an attempt to not go full frontal with the messages of each monologue, some of the dialogue was watered down but not too much.

All in all, i enjoyed the show immensely. I didnt learn anything new because i am passionate about Women’s Issues and have written about some of the issues before, i have lived through some of the issues and my work with NGOs has exposed to a lot more than were even covered during the show but i know a lot of people were stunned by some of the things they saw and heard.

The show ended with a standing ovation and the cast took their bows. The lights came up and i saw it was a full house and i spotted a lot of ‘known people’ leaving the hall. The foyer was buzzing and as i walked through, i heard praise, some people saying they didnt get certain scenes, one person echoed how much he hated it (some expatriate from Shell) et all. I saw the director Laspapi surrounded by people congratulating him while he smiled, saw people surrounding Amy from Kind etc.

My view on women’s issues is too draw attention to these matters and make changes where we can. I dont do male bashing nor am i a bra burning feminist. The Monologues made THE point. While some of the issues are perpetuated by tradition and even legislation, the fundamental issue is that women for many reasons dont have the will, the voice or the power to change some things meted out to them. Women must know their rights, know what they are worth, value themselves, have tons of self esteem, think of them as queens and life givers and have support. Abusers back away when you fight back, blood sucking relatives back off when you dont cower in shame, the gods of the land and elders will not smite you if you stand up to their traditions..and if a woman is in danger and she cannot find succour with her family, then there should be centers and safe houses that can take care of these women. Believe me, i speak from experience.

The Monologues are worth seeing in my opinion. I shall be at Terra Kulture next week to see the final show.

Much Love!
___________________
Thanks to Uzo for the review!
I saw some snippets of video from the Abuja show and it was really striking.
Omonor Imobhio was acting a skit, it was really comical and the crowd was laughing along, then she gets to a key juncture of the story and there was dead silence. Such a poignant moment.
If you are in Lagos, get out and waatch it! Send us your reviews as well.