From the Daily Mail – By Liz Hazelton

It was the day he was sworn in as the first black president of the United States.

But despite being the man at the centre of an extraordinary day which made history, there was only one thing on Barack Obama’s mind.

As the new President and his wife sashayed onstage for the first of no less than ten inaugural  balls, he turned to the crowd to ask: ‘First of all, how good-looking is my wife?’ 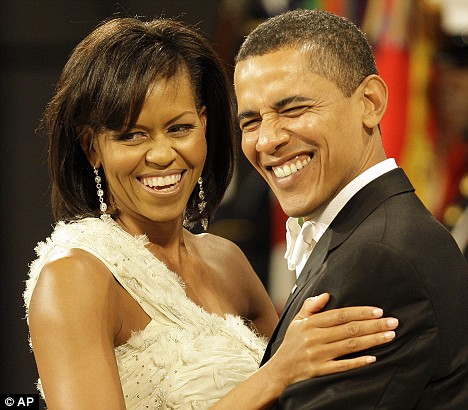 First dance: Barack and Michelle Obama take to the floor at the Neighbourhood Ball, their first stop of the evening 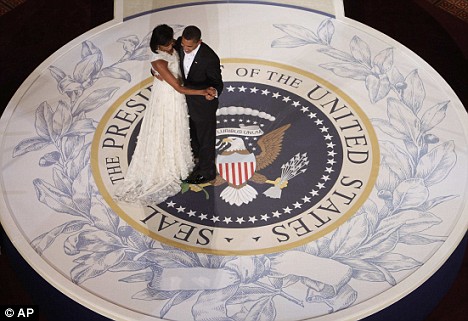 Signed, sealed, delivered: The couple at the Commander-in-Chief Inaugural Ball at the National Building Museum in Washington

Scroll down to see video of the Obamas’ first dance

Guests at the Neighbourhood Ball responded with a huge cheer while Michelle, who stood shimmering in an off-white, one-shouldered floor-length couture gown, only smiled.

Her dress was embellished from top to bottom with white floral details and was made by designer Jason Wu, 26, who has only been working in fashion for three years.

She appeared as effortlessly elegant as always and stood patiently to one side while her husband, dressed in a black tuxedo with white tie, spoke to the people who had made him President.

Today the new Commander-in-Chief will get down to the business of remaking America. 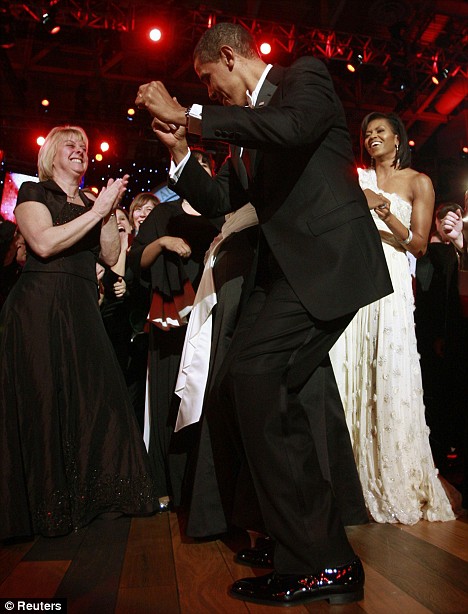 At last… a President who can dance: ‘You can tell that’s a black president,’ joked comedian Jamie Foxx as Mr Obama broke loose on the dance floor 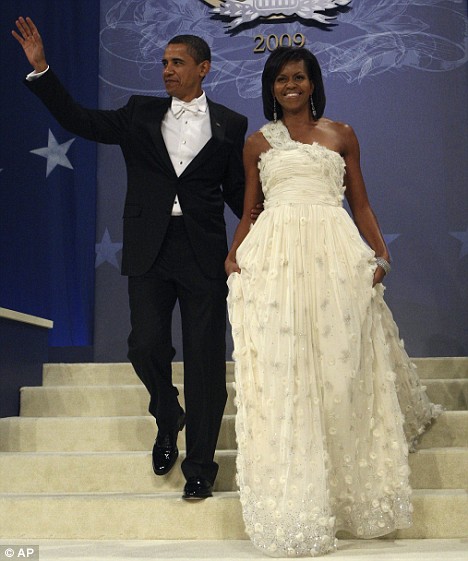 He has already started with the halting of all military trials at controversial Guantanamo Bay, pending his own review.

And his new team has put the brakes on all pending regulations that the Bush regime tried to push through in its last days.

But last night, his thoughts were all on his wife – and dancing.

He was eloquent as he spoke to supporters at the Neighbourhood Ball.

‘I want to thank all of you, not merely for helping me get elected but I want to thank each and every one of you and all the people who are watching tonight for what you do to make this country special,’ he said. 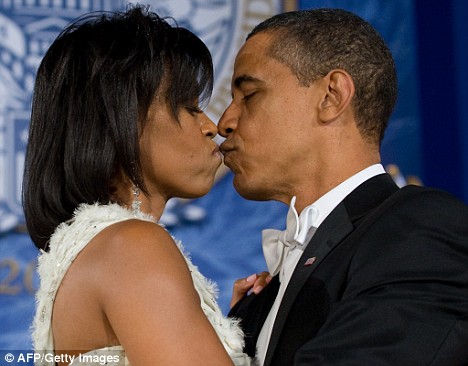 Mr President and the First Lady share a congratulatory kiss 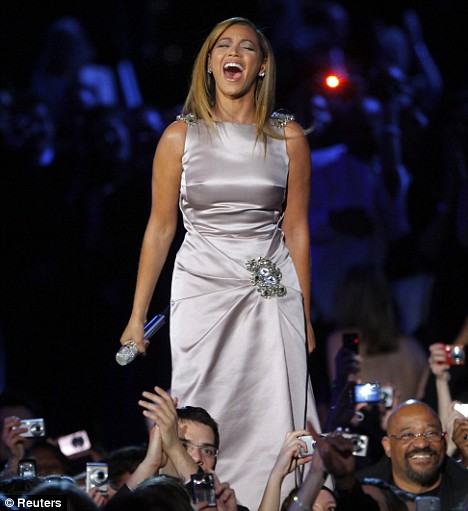 Diva: Beyonce sang Etta James classic At Last before going on to perform with other stars at the ball

After Obama had finished his speech, the pair glided on to the floor for the first dance of the evening.

The music was Etta James classic At Last, performed by Beyonce – the first of several times the couple danced to the song at the various balls around Washington.

As the new President pulled his wife close and danced a slow two-step, the vast audience seemed spellbound.

The song was played at nearly all of Obama’s rallies throughout the campaign. 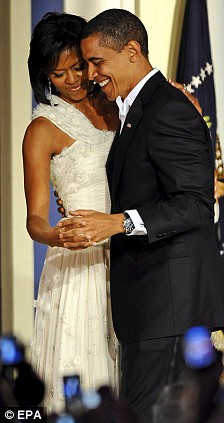 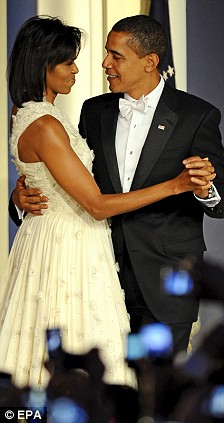 ‘You could tell that’s a black president from the way he was moving,’ comedian Jamie Foxx joked following the dance.

Forced to dance with a whole host of supporters – and watched by millions across the world – they could have been forgiven for looking a little uncomfortable.

But as the night wore on they started to relax.

After barely more than a handful of moments at the first ball of the night, they were on to the next. 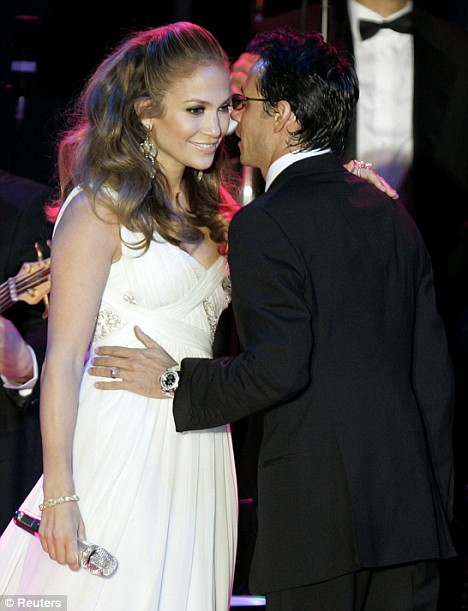 At their second ball, the president pulled the first lady much closer than he did on their first dance, at one point, wrapping both arms around her waist and locking his fingers together at the small of her back.

Vice President Joe Biden saluted the nation’s military men and women at the Commander-in-Chief Ball, joking with guests that he was not looking forward to the dancing.

He said: ‘The thing that frightens me the most (is) I’m going to have to stand in that circle and dance in a minute.’ 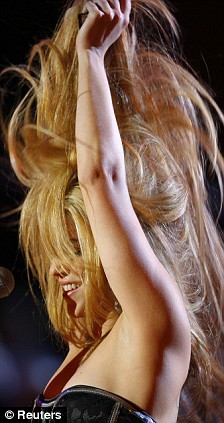 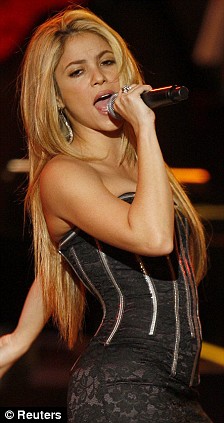 At that, he laughed and did a quick sign of the cross.

The Obamas were more enthusiastic, splitting up to dance with Marine Sgt. Elidio Guillen of Madera, California – who was shorter than dance partner Michelle – and Army Sgt. Margaret H. Herrera of San Antonio, Texas, who cried in the president’s arms.

The Obamas were joined by some of the biggest stars on the planet for a glittering night of music and dance. 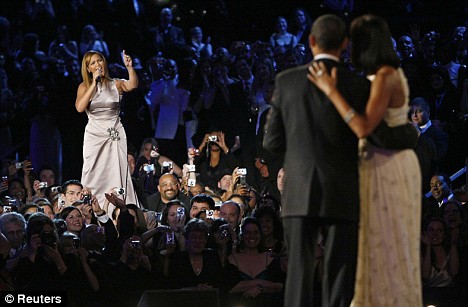 The first couple are serenaded by Beyonce, who wore a lilac dress embellished with embroidery on the shoulders and skirt

The balls are traditionally held to give as many people as possible the chance to rub shoulders with the new leader.

In a sign of the financial times, guests who already paid anywhere from $75  (£54) for a ticket to thousands more for a package deal, had to buy their own drinks served in small plastic cups. 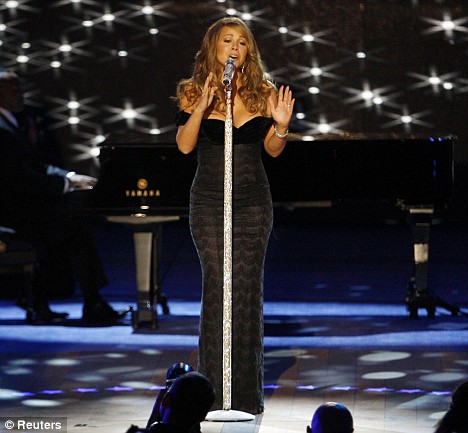 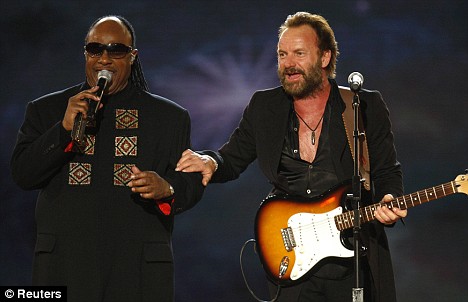 Veteran performers: A bearded Sting and Stevie Wonder perform at the Neighborhood Ball

People waited in line over an hour at Union Station to get into the Eastern States Ball, and because of very limited seating at the Western Ball, a number of attendees in long gowns and fancy dress plopped cross-legged on the floor.

Most of the ladies wore black like their dates, but Patrick Landers was an exception in his kilt at the Biden Home States Ball. 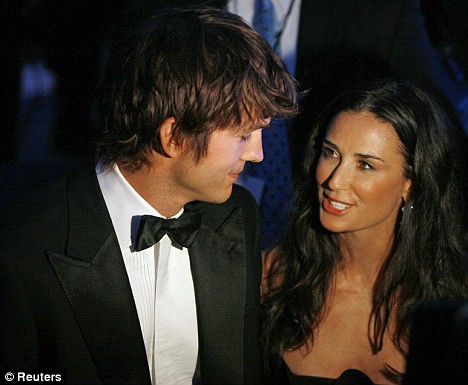 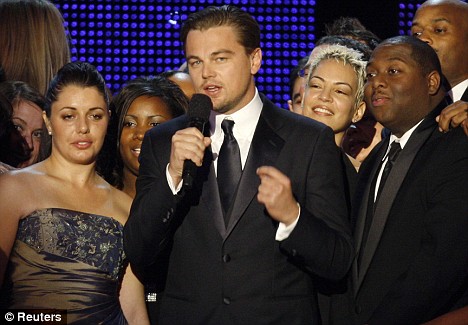 The 33-year-old Washington lawyer moved to the US from Ireland in 1998.

He said: ‘I’m here to celebrate this great day and the beginning of a transformation in the US and the rest of the world in creating a more inclusive society.’

Film director Ron Howard also took time out to express his sympathy with the long day Mr Obama was having.

He said: ‘I feel bad for him. He’s had a long day and now he has to do seven dances. This has got to be the gruelling part for the first family,’ he said.

The Obamas’ first dance of the evening was to the tune of At Last sung by Beyonce.

Mr Obama said the special party for military personnel, including 300 wounded, best represented the spirit of his presidential campaign. Jon Bon Jovi entertained the troops with a rendition of Who Says You Can’t Go Home. 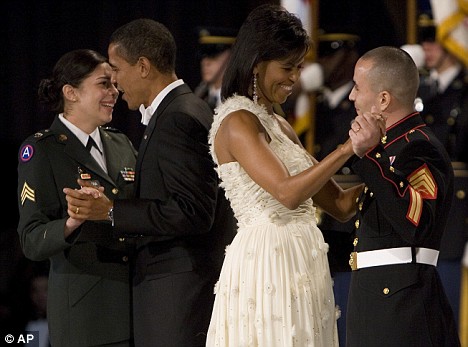 Sheryl Crow said she could not remember the last time she played a gig in a dress and heels, adding: ‘I’m doing it for the new President, just my way of serving my country.’

Marc Anthony and Jennifer Lopez shook off rumours of a split when for his last number he called her on stage for a duet. ‘Man, she’s cute,’ he said as she walked off stage.

After the Obamas swayed to At Last for the third time in the evening, the President told the crowd: ‘That’s what we call old school.’ 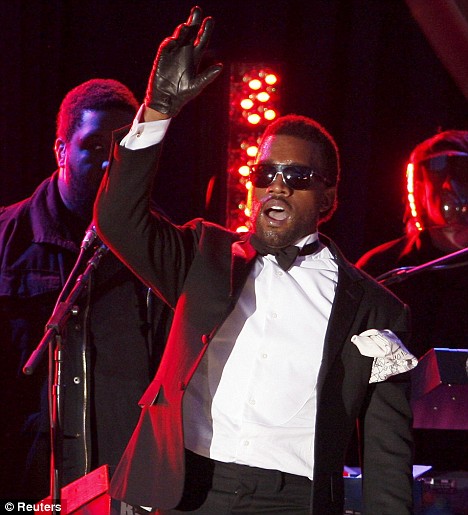 ‘The future will be in your hands if you are able to sustain the kind of energy and focus you showed on this campaign,’ the President told them.

After yet another performance to At Last, Mr Obama turned to supporters and said: ‘Let’s go change America.’

The Ball was for supporters from the Joe Biden’s home turf of Delaware and Pennsylvania. The vice-president admitted he had two left feet. Clasping his wife Jill, he declared: ‘I may not be able to dance, but I sure like holding her.’ 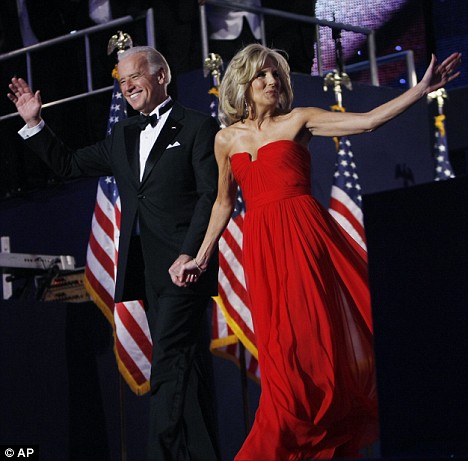 The actress said she welled up at the swearing-in ceremony. ‘I got teary just feeling it in the air. It’s so huge.’

Other big names there were Susan Sarandon, her director partner, Tim Robbins, and Anne Hathaway.

A purple carpet instead of traditional red, with stars including actress Ashley Judd. She confided to wearing long johns at the swearing-in ceremony. ‘I did layer,’ she said. ‘And I did get cold, but I expected that. It was all part of the experience.’

Relegated to the outskirts of Washington, perhaps because nine of the 11 southern states went to Republican John McCain. 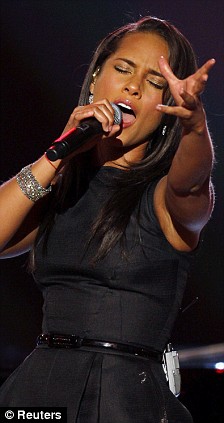 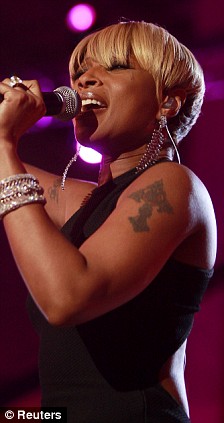 Singer Susan Tedeschi treated a crowd of 10,000 to country blues. Mr Obama introduced his wife as ‘the love of my life who does everything I do’  –  before the band struck up At Last again.

Well after midnight, President Obama reached his last official stop. ‘This is our last event of Inaugural Day,’ he said. ‘So let me ask the First Lady for one last dance.’

Earlier, the President admitted he was nervous about his dancing being up to scratch. ‘Michelle keeps knocking my dancing in public in ways that have hurt my feelings,’ he said.

‘So I probably should practise just because she’ll tease me mercilessly if I step on her toes.’

‘We were up there, we’ve got a lot of stuff on our minds and he actually, I think, helped me out on a couple of stanzas there,’ he said. ‘Overall, I think it went relatively smoothly and I’m very grateful to him.

Kefee Sings ‘Kokoroko’ Through the Storm