Our Wedding Story is back with another beautiful couple – Steve & Titi. They got married in October 2008 in a stunning ceremony in Atlanta Georgia. We wish them an absolutely blessed and fruitful marriage. 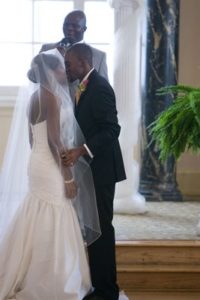 ABOUT THE BRIDE, Titi by The Groom, Steve:

I first met Titi in secondary school in Lagos. We both left the school and lost touch with each other. Several years later we ran into each other at an event in Florida and after briefly catching up we found out we both resided in Georgia so we exchanged phone numbers and stayed in touch. I soon graduated from college and was having a graduation party and I decided to invite her. We had a really good time and this time around I was determined to do more than just keep in touch and that’s when our true relationship began. 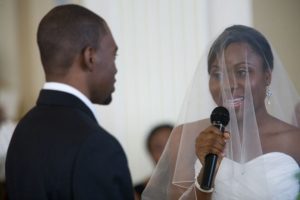 About the Groom Steve by Titi

Afolabi and I met back in high school about 14 years ago. We were friendly to one another but not exactly friends. I transferred schools and I never thought I would meet him again until I attended a reunion event in 2002. We exchanged numbers and promised to keep in touch but never actually did. Fast-forward to 2003 when I moved down to Atlanta from Athens, Georgia after college and we bumped into each other at numerous parties and just had those one-minute conversations.
Then one day I get a call from him inviting me to his graduation. I almost never made it to the event but since he called me the night before to remind me, I decided to go. At the graduation party we danced for a while and let’s just say he’s been hooked since then, lol. Four years later, we were getting married!

How You Met– We met back in high school. Although we lost touchwe  bumped into ourselves again fourteen years later at a reunion event in Florida. 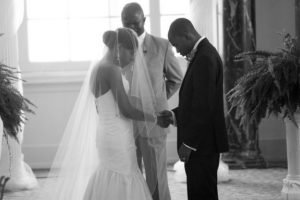 How did you know you had found “The One” :Afolabi Steve Sogunro is a great man. He has such a wonderful spirit and is so giving. He is driven and always puts God first in everything he does.  I am so lucky to call this wonderful person my husband. I wasn’t looking for love when I met Steve, which makes this so special. He is a great influence in my life and the perfect covering to my shortcomings. He has been a blessing to me and everyone around him and is someone that you can always count on. I know it’s God’s doing and I am so thankful.

Titi’s is a great motivator,she always has words of encouragement no matter the situation.Titi’s thoughtful nature further endeared her to me and i realised that she was the missing rib that i had been searching for.Titi truly means the world to me. I believe that she came into my life at the perfect time. I can honestly say after a week of dating I really wanted to marry her. I remember when she would call me and ask what I wanted to eat for dinner. I was not used to someone being that nice and thoughtful maybe it was just a one time deal, but after a while I realized she was a very caring person. She is one of the most selfless people I’ve ever met. I believe I have become a better person with her in my life. She always encourages and motivates me in every aspect of life. We are perfect compliments to each other and that’s one of the great things I love about her. I am extremely happy to have found her and most importantly very happy to be marrying her. 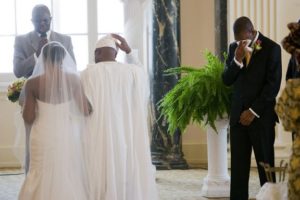 Afolabi proposed to me at my house. It was witnessed by my siblings and friends.
” I went to Bible Study that Wednesday evening so it worked out that my baby had time to plan his proposal. I knew a proposal was coming but I really had no idea it was taking place that day. I got back home from church a little after 10pm and I noticed that my neighbor had cars all around his drive way but didn’t think anything of it. As I walked up the stairs to the house, I noticed there were rose petals on the floor and I just thought, “what is this boy up to?” It was when he opened the door, and I saw the lights dimmed low that I realized what was about to happen.
My heart was beating so fast, and as I walked into the house, I noticed more rose petals and candles all around and yeah the singing! I thought he was playing the cd of “our song” because it was so on point until I saw that it was being sung live!!!! I looked to my left and in the dark I saw a bunch of my friends and immediately the tears started andfor a second I almost passed out. He held me up and took me to a chair.
Every detail was perfect :). He handed me some roses and after the song was over, he proceeded to tell me how much I mean to him, and how his life has been better since I came into his life. He got down on one knee and bam! asked me to marry him and yeah, he showed me the bling! ‘Twas beaurifullllllll. My friends informed me that he called them THAT afternoon,He had already called to ask my parents earlier that day. It also happened that all my siblings were in town and I was ecstatic that they were able to witness one of the happiest moments of my life. ”

Took place at the Biltmore ball rooms in Atlanta, GA. Wedding dress by cant say:) I had a very happy day, I had a blast, danced, danced and danced. I was a lil stressed at the beginning of the day, but once I arrived at the location, I felt a whole lot better. 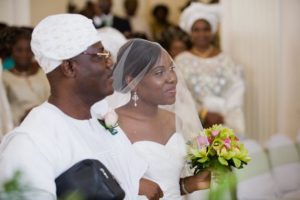 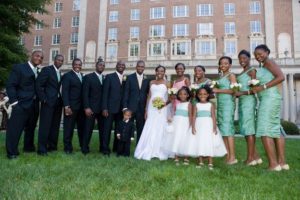 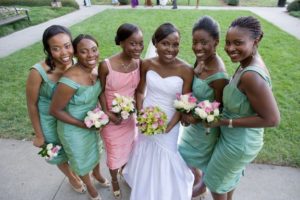 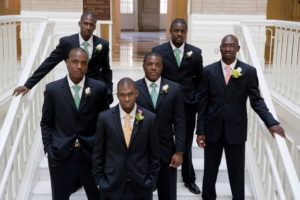 Advice for upcoming brides: Surround yourself with your true friends on that day, it makes the day a whole lot stress-free, smile even when you don’t feel like, u won’t like your pictures if you dont, have fun cos its your day and dont forget to pray!