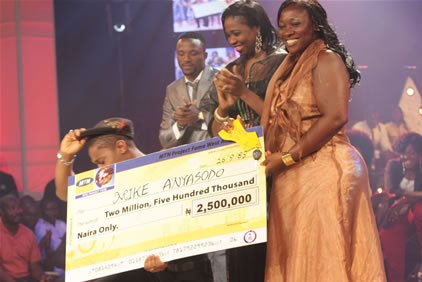 26 year old undergraduate student of Ambrose Alli University, Mike Anyasodo has emerged winner of MTN Project Fame season 2. On Sunday 28th of September 2009, Mike fought off tough competition from his fellow final 5 contestants: Liberian Nicholas Buigar, Madonna Robinson, Tomiwa Sangonuga and Krimi Johnson. The 2nd season of MTN Project Fame commenced on the 19th of July, since then, the contestants have been groomed for stardom by the academy’s team of coaches and advisers. They had been performing each week for the televised broadcast as contestant after contestant was eliminated from the competition.  Congrats to Mike! As his prize, he receives a N2.5 million cheque, a Toyota RAV 4 and a 1 year recording contract. Nicholas Buigar, the first runner-up, won N1.5 million and a Toyota Corolla; Tomiwa Sangonuga, the second runner-up won N1 million and a Toyota Yaris, while Krimi Johnson, the third runner-up got N1 million.