Nollywood screen siren Ini Edo, shines in her first big budget celluloid movie. The actress who has just finished from the set was happy to discuss a few things about the movie. ‘It was shot in Benue state and in a traditional setting; what we call an ‘epic film’. What is the film about? ‘I would not like to say right now….I think the producers will do that when they are ready. But I will say I had a great time working with the cast and crew in Benue and working with an international team right here in our country’. 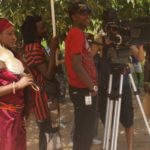 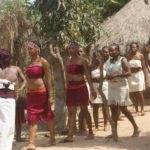 Caroline, Lola and Ini in action 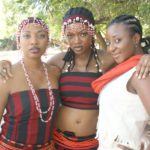 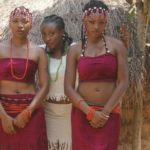 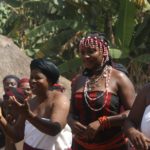 The film which was shot entirely on celluloid, was directed by Jeta Amata of ‘Amazing Grace’ fame and boasts an international cast in conjunction with several Nollywood actors. The cast, cut across a varied section of the entertainment world and it will be interesting to see how they fare as actors in this film. They include British-born actress of Nigerian parentage, Caroline Chikezie, as well as our very own Nollywood siren, Ini Edo. Caroline Chikezie is a well known actress in Britain who recently crossed over to Hollywood. Some of her film credits include ‘Eragon’ ‘Footballer’s Wives’ and ‘Aeon Flux’ which she acted with Oscar award winner Charlize Theron . Other actors in the film are Lola Shokeye (better know in music circles as Princess Lola) as well as Afrobeat exponent, Dede Mabiaku. Dede is said to be a formidable actor of the stage and it will be fun to see if he can translate his skills to film.

We will continue to update you as more information comes out. Watch this space!

Voting for The Future Awards has been extended by one week!