Voting for The Future Awards has been extended by one week! 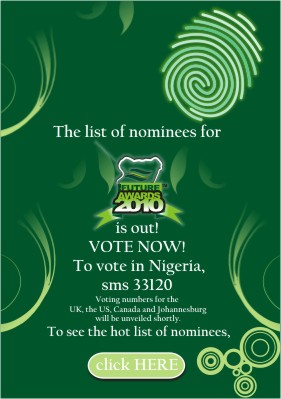 The organisers of The Future Awards have announced that voting has been extended by one week – and one week only. The major reasons for this extension, the organisers reveal, are first, because short profiles of the various nominees have just been uploaded on the website www.thefuturenigeria.com.

Also, after the two week complaint period, certain minimal challenges have been made on the Nominees List.

Therefore, people who wanted to vote for nominees in specific categories but were unable to do so because they did not know anything about the nominees or their achievements can now make informed choices and vote to reward achievement in the various categories.

And if you already knew who to vote for, then you have a greater opportunity to make sure that your candidate gets more votes! Remember you can vote as many times as you want!

The voting ends at 12 midnight on Friday the 7th of January 2010. There will be NO more extensions after this one.

PS: You can get all the info on www.thefuturenigeria.com

Change-A-Life to kickoff 2010 by spreading rays of hope