No! I am not referring to that ki 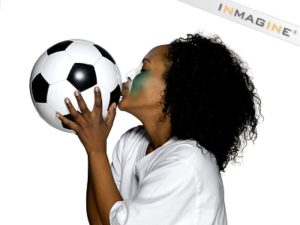 nd of foot fetish!! Jeez! Ladies, get your minds out of the bedroom for a moment. I am most respectfully referring to that other kind of foot fetish, the one which involves twenty two men on a playing field and a round leather object. Yes, I am talking about the beautiful game of football!!! (Or ‘soccer’ as our American friends like to call it).

Eyah! So you thought it was all over with the end of the World Cup, abi? So sorry to burst your bubble because the fetish starts all over again come August 15.

I know some of you still find it hard to understand what all the hula baloo about football is. You get irritated as your partners and better halves take-off every weekend to catch a game with the boys. Your men suddenly become fixated upon one league or the other be it the English Premier League; the Italian Serie A; Spain’s La Liga; Portugal’s Primera Liga; the German Bundesliga; or French Ligue 1. The weekdays are also not sacrosanct as the league of all leagues – the European Champions League schedules games for Tuesdays and Wednesdays (there go the scheduled mid-week trips to the movies!) The focus and attention will switch from you to his beloved club and her performance during the campaign. Whether it’s Arsenal, Manchester United, Liverpool, Chelsea, Barcelona, AC and Inter Milan you really do not care. Argh! I can almost hear the groans.

Come August 15 for the next nine months or so your men will don the latest club jerseys or will dig out old ones from their closets. Conversation will now be centred on football as the living room becomes a mini viewing centre. Of course as a ‘good’ woman you might decided to go the extra mile by providing finger food to accompany the several bottles or cans of beer that will be swirled with each match before you retreat to the sanctity of your bedroom. If you are lucky your men will carry their wahala to the nearest pub, bar or viewing centre sparing you the incessant shouting and arguments. If his team wins then you know he will be in a good mood for the next seven days. On the other hand, if they lose… you had better take cover for the next 48 hours or so!

Now, I find that some women cannot understand what all the love (or is it madness?) is all about. They can barely tolerate their man when his foot fetish is on. But I have always been of the opinion that women should at least try to understand this fetish and then go on to love it. Why do I think this way? Because, believe it or not men find women who share a love and knowledge of the game extremely attractive and sexy! Better still if she supports the same club as he does! For real ladies if there’s a guy you like and you want to endear yourself to him, one sure way to do that is to find out the team he supports and take a crash course on the club and the game of football in general. I swear he will be taken by you! Try me and see.

A case in point is a girl I met while serving in Umuahia. While getting to know each other better I mentioned that I was an Arsenal FC fan and she was like, “You too! Wow! I’m an Arsenal fan too! In fact my dad and brothers are die-hard fans!” We soon hooked up and spent almost every weekend watching an Arsenal game together at one hotel like that. Truth be told I took great pride in being one of the few guys who had a girlfriend in tow at these games. Now imagine the shock of my life when a couple of years later (after we had broken up) she confessed with great mirth that she was never really an Arsenal fan but a Chelsea fan! I almost fainted.

I have an ex from school that I still call during or after every Arsenal game to discuss the highlights of the game. We are die hard fans; we scream, insult the coach, the players when they mess up and hail the entire team when ‘we’ win. On Facebook my group of fellow Gooners (as Arsenal fans are referred to) is not complete without Biola. What?!! Commentary on the day’s game is never complete without a comment or two from her. All the guys secretly admire her and are tripped by her love for the team. What about Nneka who runs a blow by blow commentary of matches on Facebook!

Come on! Don’t turn up your nose. Imagine if your man has to reach out to other people – women included – to share the joys of victory or to help assuage the agonies of defeat, enh? If football is an important part of your man’s life you had better take advantage of that. It’s not so hard; even if you cannot learn the rudiments of the game then you can do what a friend’s wife does. She makes sure she knows all the players’ names, including the coach. She walks in as the game starts sits for like fifteen minutes and enthusiastically points out who is playing as she ‘forms’ being interested. A few moments later she retreats into the room only to emerge whenever a goal has been scored. “Oh! We’ve scored! Was it Ronaldo or Rooney?” I’ve got this friend and his entire family are Manchester Unites fans, his brothers, sisters, his wife and their new baby girl, in fact the angel had a birthday cake done in the club’s logo at her first birthday. I regret the day I made the mistake of watching an Arsenal vs. Manchester game in their house, it was not funny at all especially as Arsenal lost. Or if it’s all too much for you I suggest you just find a guy who supports Arsenal as you won’t lose out totally. Talk about eye candy for the ladies! For real you get to ogle the team with the finest and cutest set of players in the world. Lol!

And its not always about their favourite teams, it’s about mutual love for the beautiful game. I once went to see a Champions League game at a bar even though my team was not playing and before long an attractive young lady struck up conversation with me as I was analyzing the game. I was tripped that she knew so much about the finer points of the game; more so the fact she had come alone after work to watch a non-partisan game. What am I saying? I know a girl that went to the National Stadium at Surulere to watch a match the Super Eagles were playing a couple of years ago! She shoved and pushed with the best and worst of fans to get in early to see the now Super Chickens play.

So take an interest in his foot fetish, try to learn and understand the game, watch some games with him, get real loud cheering his team on, boo and heckle the opposing team and their fans, have a couple of drinks and to top it all up get matching jerseys! It works like a charm.

BN Exclusive: Photos from the set of Omotola’s Brand New Video “Missing U”